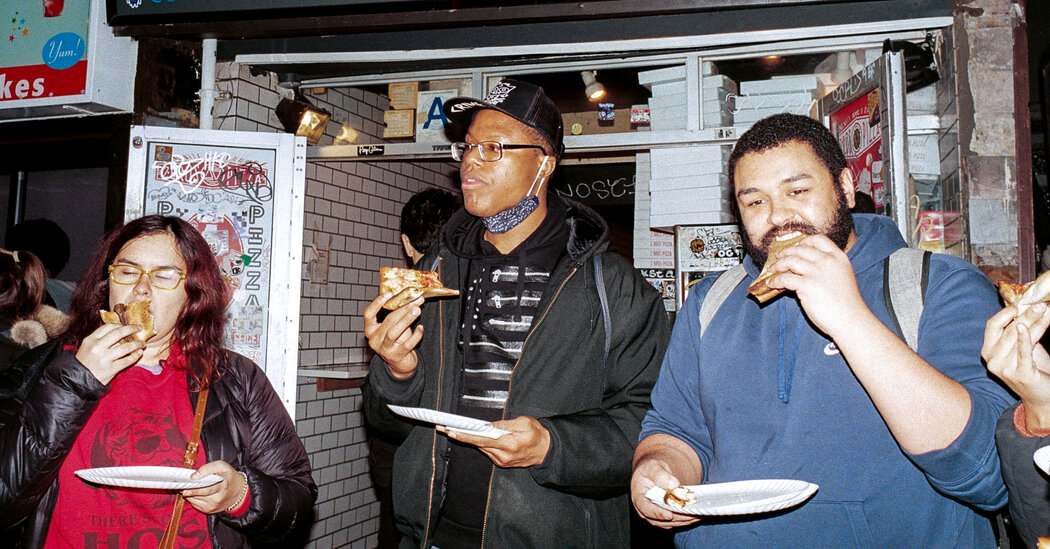 To hear more audio stories from publications like The New York Times, download Audm for iPhone or Android.

For two decades, 99 Cent Fresh Pizza, a New York City chain, has charged $1 for a slice of cheese pizza, luring anyone who needed to fill up for cheap in a notoriously expensive city, from construction workers to students to late-night partyers.

But the pandemic has thrown its business model, which relies on heavy foot traffic in office districts and tourist hubs, into an existential crisis. With inflation rising at its fastest pace in a generation, prices for just about everything — from pizza boxes to pepperoni, flour and oil — have skyrocketed.

The chain’s owner, Mohammad Abdul, is now agonizing over whether to raise prices for the first time since opening in 2001.

“Maybe I can raise it 5 cents,” he said. “Some customers don’t have the money to buy the pizza. I’m thinking how low can I sell it and help the customer.”

Mr. Abdul is one of the last holdouts in New York City’s fiercely competitive dollar-slice pizza scene, where a growing number of chains have raised prices or closed locations permanently, in part because some can no longer pay their rent. No other city in America has a dollar-slice culture quite like New York, which took off in popularity after the 2008 recession.

Pizza businesses nationwide have been hugely successful during the pandemic, well positioned to handle takeout and delivery. But inflation, pervading nearly every aspect of the economy, has been especially threatening to dollar-slice operators in New York, which maintained razor-thin profit margins by depending entirely on customer volume and cost efficiency.

Many owners of dollar-slice businesses, including those who raised prices, said their revenues were half of what they were in 2019, before the pandemic.

In November, inflation jumped to the highest level in nearly four decades, fueled in part by a 6.8 percent increase in food prices, according to the most recent Labor Department report.

Restaurant prices in the New York area last month had their largest year-over-year increase since 1987, according to the Bureau of Labor Statistics.

There is no culinary experience that New Yorkers share more widely and more unanimously than the slice joint.

In a potential bellwether for the universe of $1 goods, Dollar Tree also announced last month that it would raise prices of most items to $1.25 by the end of April to offset wage increases and higher distribution costs.

For pizzerias, each ingredient has become more expensive for its own reasons, economists say.

A winter freeze in Texas earlier this year curtailed the production of resin, a raw ingredient in plastic straws and packaging materials like shrink wrap. And in perhaps the biggest shortage of all for pizzerias, reliance on food delivery during the pandemic prompted a surge in demand and increased prices for pizza boxes, paper plates and takeout containers.

The saving grace, business owners say, has been cheese, typically the biggest food cost for any pizzeria. Average block cheese prices are down from last year’s unusually high peaks, which had been propped up by government programs to help dairy producers.

But the U.S. Department of Agriculture is already forecasting that block cheese prices will rise next year, partly because a drought in California is expected to reduce milk output.

If cheese prices soar for an extended period, that would be “the straw that breaks the camel’s back with respect to the dollar-pizza business,” said Eli Halali, the co-owner of 2 Bros. Pizza, a chain that is credited with propelling the dollar slice into mainstream popularity and spawning countless imitators in the 2010s.

Because of stable cheese prices, which account for almost half of the food costs at 2 Bros., the chain is still charging $1 for a cheese slice at six of its nine locations, though newer stores with a less established customer base have raised prices to $1.50. 2 Bros. is “committed to keep our plain slice at $1 where we can for as long as we can,” Mr. Halali said.

Stuart Kull, a sales consultant at the Italian food distributor Ferraro Foods, said a lack of truck drivers has exacerbated rising food prices, to the point where he has had to personally drive ingredients to customers. Mr. Kull sells primarily to pizzerias in Manhattan, including dollar-slice chains.

Some deliveries that used to arrive to customers at 9 a.m. now come at 7 p.m., Mr. Kull said. And when trucks fail to show up in the morning, restaurant owners scramble to find emergency supplies for the day, paying much higher prices.

The mere concept of charging $1 a slice is controversial in pizza circles. Critics call it a race to the bottom, arguing that dollar slices have devalued New York’s renowned pizza scene and led to the closures of pizzerias that charged $2.50 a slice.

Dollar-slice operators say they exposed the mediocrity of those midrange slices and provide an essential source of food in an increasingly unaffordable city. The earliest dollar-slice pizza stores opened near homeless shelters.

“Any town where you can struggle to pay the rent and still get a buck slice is pretty damn good,” said Scott Wiener, who runs a pizza tour company in New York.

Though there are no precise overall numbers, dozens of eateries across New York City sell pizza slices for $1.

The dollar-slice businesses that are still standing have largely relied on reduced rent from landlords.

Hakki Akdeniz, the owner of Champion Pizza, said some landlords have threatened to sue over rent, forcing him to close three locations during the pandemic.

“The day I closed, it hurt me,” he said. “I cried. It’s not about money. It’s about eight years of hard work building up my business.”

His Essex Street location on the Lower East Side has survived because the landlord gave him a discount to stay in the 200-square-foot kitchen. Mr. Akdeniz sells about $1,200 to $1,500 in pizza a day at that location.

On a recent Wednesday at lunchtime, the counter bustled with middle-school students from a nearby charter school waving dollar bills to get a slice of pizza (for adults, a cheese slice costs $1.50 before 8 p.m.).

A man began to ask customers in line to buy him a slice of pizza, and Mr. Akdeniz gave him two free slices. The man said he lived in a homeless shelter and was looking for a job. Mr. Akdeniz, who was once homeless himself, suggested the man could place menu fliers in apartment buildings for his business.

“A lot of people are suffering,” Mr. Akdeniz said. “I want to open a pizza shop with only homeless people working for me.”

But the optimism is fading for owners like Abdul Batin, who operates a chain called 99 Cents Hot Pizza.

He has already shut down three of his nine stores during the pandemic and is considering closing three more, which would lay off a total of at least 20 employees.

Mr. Batin opened his first dollar-slice pizza business in 2009, after he immigrated to New York from Bangladesh.

“I cannot survive this. Everybody I talk to, they are thinking of moving out,” Mr. Batin said, referring to the community of pizzeria owners from Bangladesh. “Nobody can do it for a dollar a slice anymore.”

He said his business was hurt by the large number of regular customers who are still working from home.

Outside Mr. Batin’s store in Downtown Brooklyn, there are both “help wanted” and “space for rent” signs. This fall, he raised prices from $1 to $1.50 for a cheese slice.

Syldon Nedd, a street vendor who sells used goods, noticed the higher price but still eats there about three times a week. “Prices have to go up sometime,” Mr. Nedd said as he walked in for a slice. “It’s still cheap.”

At another chain called Joey Pepperoni’s Pizza, the owner, Teddy Gross, is leaving the pizza business for good. He bought three locations in the year before the pandemic, when the chain still charged $1 for a cheese slice. After he incrementally raised prices, he said his profit margin was around 10 percent.

Mr. Gross recently sold or closed all three stores and is thinking about moving to Florida. At the TriBeCa location, he said, the landlord hoped to find a new tenant willing to pay $15,000 in monthly rent (Mr. Gross said he paid $3,000 a month during the pandemic, down from his prepandemic rent of $9,500).

“You can sort of get away with higher rents if you’re charging $3.50 or $4 a slice,” he said. “Honestly, $1 pizza really shouldn’t have ever existed.”