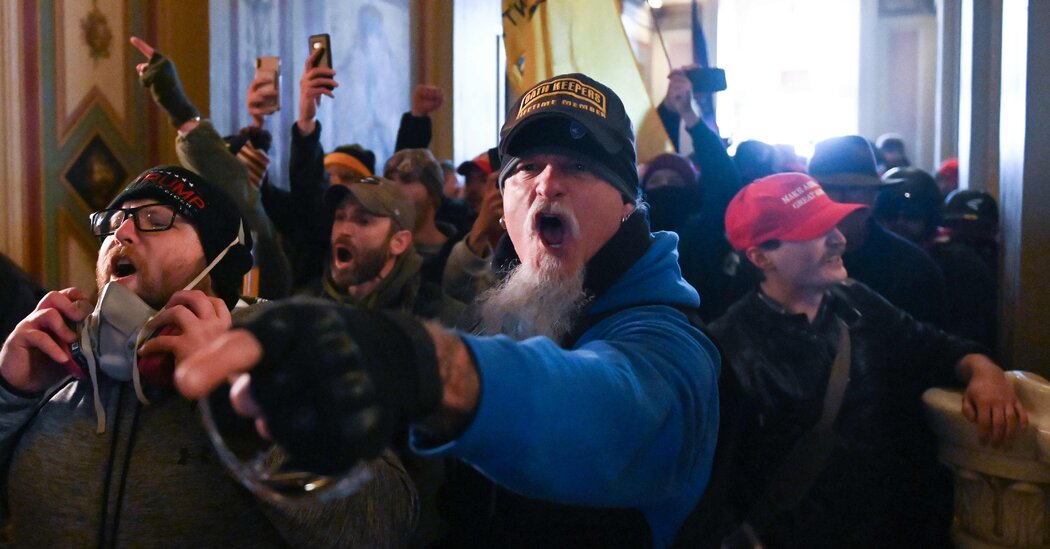 The plea by a member of the far-right extremist group the Oath Keepers was the first to be entered publicly by any of the more than 400 people who have been charged so far in the attack.

A member of the Oath Keepers militia who was charged in connection with the riot at the Capitol pleaded guilty on Friday and agreed to cooperate with the government — potentially against other members of the far-right extremist group.

The guilty plea by the Oath Keeper, Jon Ryan Schaffer, 53, of Indiana, was the first to be entered publicly by any of the more than 400 people who have been charged so far in the Jan. 6 attack. News of the plea emerged last week after sealed documents in Mr. Schaffer’s case were briefly — and accidentally — made available on a federal court database.

Mr. Schaffer’s cooperation with the government could prove instrumental in helping prosecutors pursue a separate and much broader conspiracy case against 12 other members of the Oath Keepers who stand accused of some of the most serious charges in the sprawling investigation into the storming of the Capitol. Though he was not charged as part of that case, Mr. Schaffer’s agreement to assist the government was apparently significant enough that prosecutors said at a court hearing on Friday that they would sponsor him for the witness protection program.

In recent days, the vast investigation into the Capitol breach has reached a kind of turning point as the nationwide flurry of arrests — an average of about four a day since Jan. 6 — has gradually slowed and lawyers for the rioters have started readying defenses. While Mr. Schaffer, a guitarist and songwriter for the heavy metal band Iced Earth, was the first defendant to publicly plead guilty, prosecutors expect that many more will follow.

Mr. Schaffer pleaded guilty in Federal District Court in Washington to two charges: obstruction of an official proceeding and entering a restricted building with a dangerous weapon. Both are felonies and carry a combined total of up to 30 years in prison, though it is likely that he will serve far less time if the government is satisfied with his cooperation.

After Mr. Schaffer’s plea hearing, the Justice Department issued a news release playing up the development and noting that Mr. Schaffer had acknowledged in his agreement with the government that he was “a founding lifetime member” of the Oath Keepers, a right-wing militia that traditionally recruits former military and law-enforcement personnel. But that description may in fact have come from photographs of Mr. Schaffer at the Capitol in which he can be seen wearing a baseball cap that read “Oath Keepers Lifetime Member.”

The Oath Keepers conspiracy case is one of two large cases in which prosecutors have charged rioters with hatching plans to commit violence at the Capitol after President Donald J. Trump lost the election in November. In the other case, prosecutors have charged four leaders of the far-right nationalist group the Proud Boys with planning an attack well in advance of Jan. 6 and then leading a mob of about 100 members and supporters past police barricades.

As part of the Oath Keepers case, the authorities have said they are investigating Stewart Rhodes, the founder of the group, who was at the Capitol on Jan. 6 but did not appear to have entered the building. Prosecutors have noted in court filings that Mr. Rhodes, a former paratrooper and a graduate of Yale Law School, was in close communication with his militia members throughout the day of the attack.

Hoping to prove their case, prosecutors have amassed a trove of electronic evidence — group chats, Facebook messages, even conversations on a digital walkie-talkie app — suggesting that the dozen Oath Keeper suspects were angry about Mr. Trump’s electoral defeat. The evidence also shows, prosecutors say, that members of the militia took steps to prepare for violence on Jan. 6, perhaps most prominently by setting up a so-called quick reaction force outside Washington to ferry weapons to those at the Capitol in case of trouble.

Their lawyers, however, have argued that they did not go to Washington to stop the certification of the presidential vote, but instead to serve as bodyguards for prominent Republicans like Roger J. Stone Jr., Mr. Trump’s former adviser. While the Oath Keepers may have planned for violent encounters in the city, their lawyers have said, they were merely anticipating conflict with leftist counterprotesters like those who had shown up at pro-Trump rallies in November and December.

It remains unclear what direct knowledge Mr. Schaffer may have about what his fellow Oath Keepers did in the days leading up to Jan. 6 or during the storming of the Capitol itself.

He was initially charged on Jan. 16, in what amounted to an early wave of criminal complaints, and was accused of carrying bear spray and engaging in “verbal altercations” with police officers at the Capitol. But he has not appeared in any of the numerous photographs or videos of the Oath Keepers breaching the building in what prosecutors have repeatedly described as a military-style “stack.”

Nor have prosecutors introduced any evidence at this point that Mr. Schaffer took part in the multiple conversations and online meetings that members of the alleged conspiracy had on various digital platforms in advance of Jan. 6.

The government typically likes to keep cooperation agreements quiet, but in an unusual move, prosecutors in Mr. Schaffer’s case decided not to conduct the hearing in secret even though the presiding judge, Amit P. Mehta, gave them the chance to do so. In fact, Ahmed Baset, an assistant United States attorney, told Judge Mehta that the government did not mind if the public knew about Mr. Schaffer’s deal, suggesting that they wanted to signal that he was cooperating.