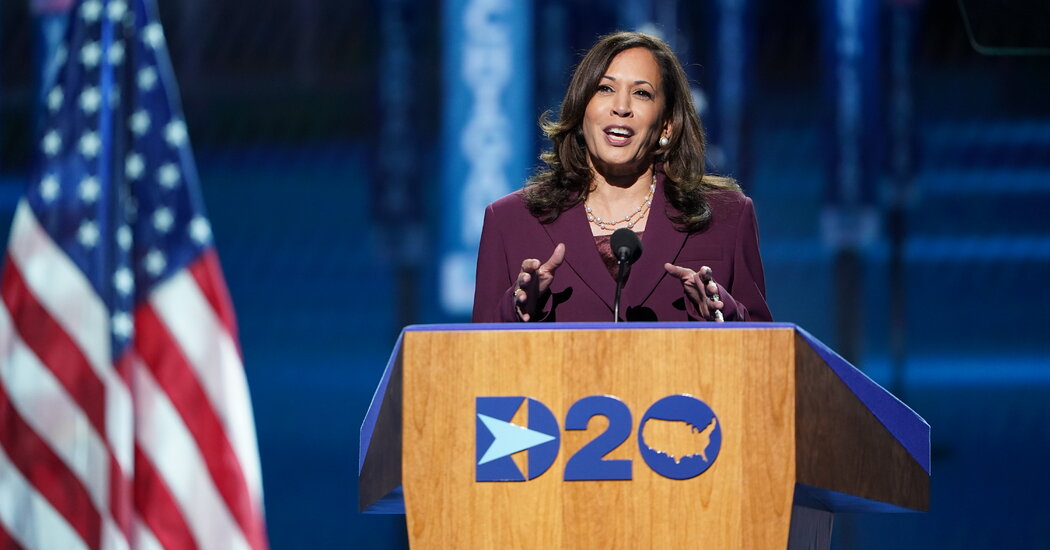 After Joe Biden announced that he had selected Senator Kamala Harris as his running mate, Bernie Sanders praised her in an interview on MSNBC: “I will tell you that Kamala is very smart, very aggressive,” he said. And then he delivered the inevitable, racialized compliment that makes many African-Americans cringe: “very articulate.”

Just a few days earlier, on MSNBC, Steve Schmidt, the former Republican strategist, called Ms. Harris “a formidable political leader in this country,” adding: “She’s smart. She’s quick on her feet. She’s articulate.” With this description, both men echoed Todd Gloria, a candidate for San Diego mayor, who said in an interview with News 8 on Aug. 11, “She is someone who is incredibly smart, very articulate.” Bob Mulholland, a Democratic superdelegate from California, declared outside of his home on the same day, “In the era of social media, you got to have someone who looks good on television and is articulate and intelligent, and that fits Kamala Harris.” Writing in The Week in December, Damon Linker called her “the total package. Smart, articulate, sassy, attractive.”

This year has started to feel a lot like 2007, when Joe Biden apologized to Barack Obama after public criticism for calling him “the first mainstream African-American who is articulate and bright and clean and a nice-looking guy.”

To paraphrase the question that we asked in our book, “Articulate While Black”: Why do non-Black people so frequently refer to high-achieving Black people as “articulate,” and why is it so offensive?

As Lynette Clemetson explained in February 2007 in a New York Times essay about the way the adjective was used to praise Mr. Obama, “When whites use the word in reference to blacks, it often carries a subtext of amazement, even bewilderment.” That subtext is inherently offensive, she wrote, “because it suggests that the recipient of the ‘compliment’ is notably different from other Black people.”

Michael Eric Dyson, a professor of sociology at Georgetown, told Ms. Clemetson that the implication “is that most Black people do not have the capacity to engage in articulate speech, when white people are automatically assumed to be articulate.”

Describing a Black person as “articulate” can be an example of what Imani Perry, a professor of African-American studies at Princeton, describes in her book “More Beautiful and More Terrible: The Embrace and Transcendence of Racial Inequality in the United States” as placing the person into “a state of exception.” This happens, she argues, only when the “normal” state of the person’s group is assumed to be deficient.

This is of course not what most Americans think of as your standard, run-of-the-mill racism, the kind that has plagued the history of this country since its inception, leading to genocide, enslavement, mass incarceration and police abuse.

And it’s not. It’s something more complicated and more subtle. In his book “Between Barack and a Hard Place: Racism and White Denial in the Age of Obama,” the anti-racism activist Tim Wise called it “Racism 2.0,” or “enlightened exceptionalism” — a celebration of the achievements of people of color but only because those individuals generally are seen as exceptions to a “less appealing, even pathological Black or brown rule.”

This is not to say that people who use the phrase are racist or that they mean to insult the Black people they’re describing. After all, Mr. Schmidt has also said that Ms. Harris is “intellectually” superior to Vice President Mike Pence and would defeat him handily in a debate, arguing, “They’re not in the same league with each other.”

It’s also true that “articulate” is not only used this way with Black people. Southerners, immigrants — especially the undocumented — children and the otherwise marginalized are referred to as “articulate” in very similar ways. It’s even used to describe white people who don’t fit into any of those categories. But that doesn’t negate the fact that the repeated use of particular words by particular people in particular contexts and situations gives these words socially charged meanings. And that’s what’s happened here.

Intentionally or not, when Black people are given the “compliment” of being “articulate,” it’s often combined with other adjectives like “good,” “clean,” “bright,” “nice-looking,” “handsome,” “calm” and “crisp.” When someone feels the need to point out that an individual Black person has these qualities, it’s understandable that Black people who hear this will infer that the speaker thinks this is unusual and that Black people are usually the opposite — bad, dirty, dumb, mean-looking, ugly, angry, rough and inarticulate.

This is why, regardless of the speaker’s intentions, when Ms. Harris or any other Black person is described as “articulate,” many hear a backhanded compliment at best.

H. Samy Alim, director of the Center for Race, Ethnicity, and Language at U.C.L.A., and Geneva Smitherman, professor emerita of English at Michigan State University, are the authors of “Articulate While Black: Barack Obama, Language, and Race in the U.S.”