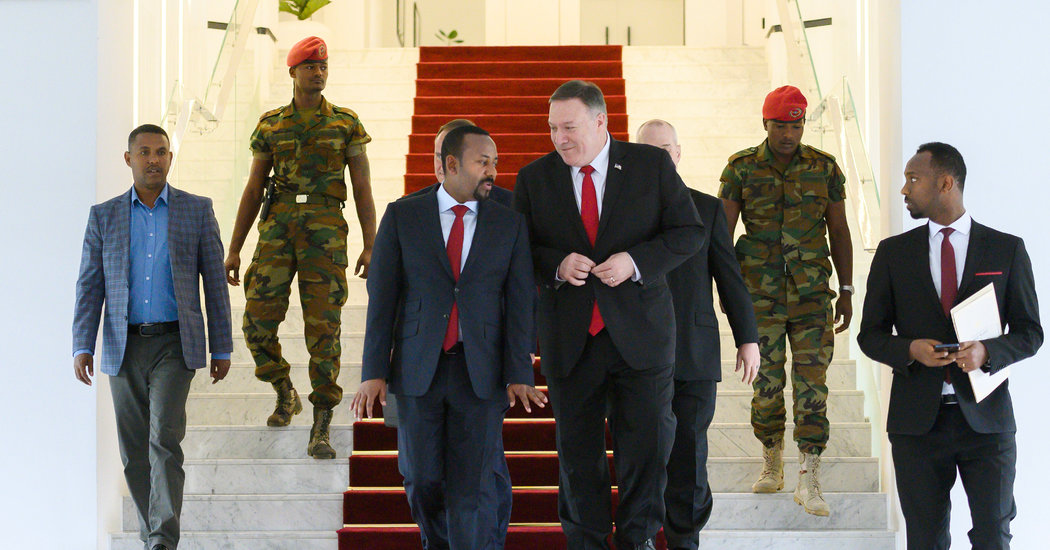 NAIROBI, Kenya — When U.S. Secretary of State Mike Pompeo landed in Ethiopia as part of his first foray into sub-Saharan Africa, he arrived in a city shaped by the same adversary that he had come to preach against: China.

Mr. Pompeo and his delegation were received on Monday night at the Bole International Airport, one of Africa’s biggest, expanded in part by Chinese funds. His entourage passed through the capital, Addis Ababa, where Beijing has built highways and factories, and financed a metro system and a multibillion dollar railway to neighboring Djibouti.

On Tuesday, Mr. Pompeo met the chairman of the African Union at its towering headquarters, built and paid for by China at a cost of $200 million.

Almost two years since President Trump named him America’s top diplomat, Mr. Pompeo has traveled to Africa to convince its leaders to shun Chinese investments and, instead, look to Washington and American companies for collaboration.

But he has come to Senegal, Angola and Ethiopia without offering any major new American government investment, initiatives or assistance. Instead he promoted American companies, boasting that their practices are superior and motives purer when compared to China’s.

“When we come, we hire Angolans,” Mr. Pompeo said at a news conference in the Angolan capital, Luanda. “We do high-quality work. It’s transparent.”

“Not every nation that comes here to invest does that,” Mr. Pompeo said. “There’s no political objective.”

Mr. Pompeo’s efforts to contain China’s role in Africa come as the Trump administration is sending mixed signals about its engagement with the continent.

Amid growing extremist violence, the United States is weighing proposals to reduce or completely pull out its forces from West Africa, drawing sharp criticism from both allies and lawmakers.

In early February, President Trump announced an expanded travel ban that now affects nearly a quarter of Africa’s 1.2 billion people — including Nigeria, the continent’s biggest economy and its most populous nation.

As both China and Russia step up their presence and investments, the United States has proposed cutting aid and development funding to African states — which still dwarfs that of China and Russia. President Trump himself has also faced censure for reportedly calling African states “shithole countries,” drawing outraged responses across the continent and potentially harming strategic American interests.

The Trump administration’s Africa policy has focused almost exclusively on countering the influence of China and Russia, said Aubrey Hruby, a senior fellow with the Atlantic Council’s Africa Center.

While previous American presidents sent mixed cues about their depth of commitment to Africa, Ms. Hruby said, they also had signature programs that reflected their visions. This included Barack Obama’s initiative to boost electricity access, George W. Bush’s program to address the H.I.V./AIDS epidemic, and Bill Clinton’s signing of the landmark African Growth and Opportunity Act in 2000, a cornerstone of the U.S.-Africa trade relationship.

The Trump administration, she said, is yet to find “a positive focus to promote in Africa.”

Over the past two decades, China has deepened its reach in Africa, financing large infrastructure projects like roads and a railway in Kenya, opening up a military base in Djibouti, deploying peacekeepers in South Sudan and Liberia, and spreading its culture and language by funding Confucius Institutes across the continent.

The first trip that China’s foreign minister takes each year is to Africa, and other senior Chinese officials regularly visit countries across the continent to solidify relations. African leaders themselves have often trooped to Beijing. Paul Kagame, the president of Rwanda, described the partnership between Africa and China as not just “equal” but “a revolutionary posture in world affairs.”

Since Mr. Trump took office, African leaders look at America and see signs of its neglect. Over three years, Mr. Pompeo and his predecessor Rex Tillerson have visited fewer than ten African countries — a decline from the nearly two dozen African states visited by former Secretary of State Hillary Clinton, who served under President Obama for four years.

In light of this, “U.S. government officials just don’t seem to understand that talking trash about the Chinese in Africa, regardless of its merit, just does not help their cause,” said Eric Olander, co-founder of a research initiative, The China Africa Project.

In addition, Mr. Pompeo’s suggestion that Chinese companies operating in Angola do not hire locals was not accurate, Mr. Olander said, noting that locals got a majority of the jobs on Chinese projects.

Beijing has been accused of offering cheap, no-strings-attached loans to African governments that are in dire need of financing to boost their economies — with the sting of default coming when those nations can’t repay those debts. China critics and Western officials, including Mr. Pompeo himself, have said these lending programs amount to a “debt trap,” pose a risk to the sovereignty of African states, and could push debt limits to unsustainable levels. Chinese officials have fervently denied these claims, and cast their engagement with Africa as a win-win.

In Angola, which is in the midst of a massive corruption scandal involving the former president’s daughter, Mr. Pompeo railed against the “destructive” nature of corruption and its impact on ordinary people. Yet analysts say that this message may ring hollow among Africans well aware that President Trump just underwent an impeachment trial and has been accused of steering U.S. government business to his own hotels and resorts.

But it may be that Mr. Pompeo’s trip will convince some African leaders that the Trump administration is now ready to focus on Africa. His visit, said Addisu Lashitew, a research fellow with the Brookings Institution, a research organization in Washington, “testifies to a modicum of interest in the continent” and signals a step toward resetting the relationship with Africa in anticipation of President Trump’s re-election.

This is especially true in the choice to visit Ethiopia, a strategic American ally that is undergoing sweeping changes under Prime Minister Abiy Ahmed. A fast-growing economy, Addis Ababa plays a critical security role in the Horn of Africa, is home to the African Union, is liberalizing its economy and privatizing key sectors like telecom. The country has extensive relations with China, but has engaged the United States in trying to resolve a dispute with Egypt over a dam that Ethiopia has built on the Nile.

American officials traveling with Mr. Pompeo said on Tuesday they were encouraged that Mr. Abiy hasn’t deviated from his commitment to reforms, and commended his efforts to renegotiate Ethiopia’s debt with China.

Besides the two secretaries of state, Secretary of Commerce Wilbur Ross and Mr. Trump’s daughter Ivanka Trump have visited Ethiopia in the past three years, demonstrating the country’s ongoing significance no matter the American administration, Mr. Lashitew said.

While “Chinese finance and investment is far from perfect,” Mr. Lashitew said, “it is not fair” that Mr. Pompeo ask African leaders to choose between the U.S. and China. “If the U.S. is a genuine development partner of Africa, it must respect the right of African countries to partner with any other country that can help them grow their economies, including China,” he said.

In trying to compete with China in Africa, Ms. Hruby said that the United States should focus on sectors where it has unique advantages, including education, finance, media and entertainment. The N.B.A.’s push into Africa, for instance, could act as a tool to attract support in Africa.

“In terms of building U.S. influence in African markets and enhancing brand USA,” Ms. Hruby said, “Black Panther,” the superhero film based on the fictional African nation of Wakanda, and “the new N.B.A. Africa league have done far more than a handful of cabinet level trips ever could.”