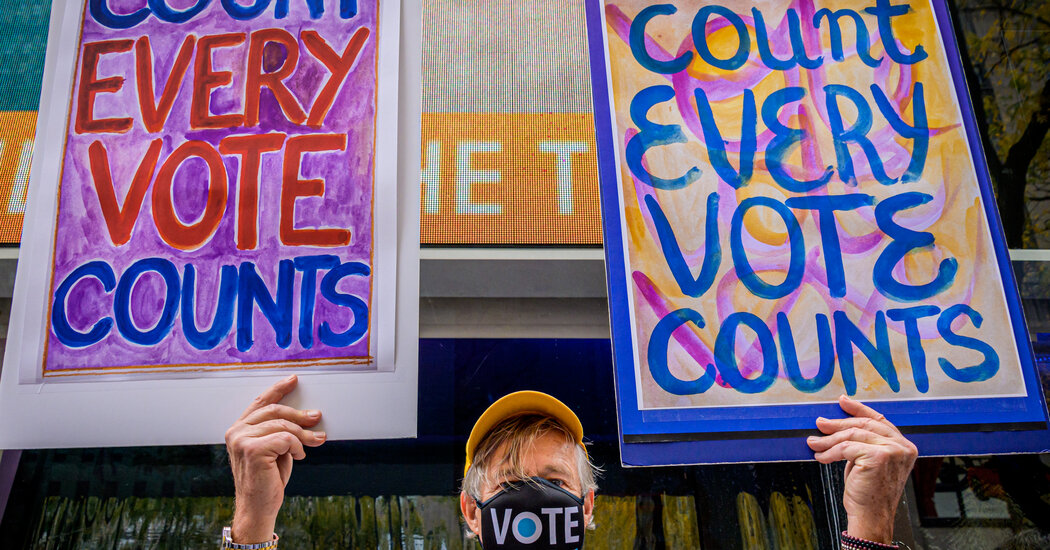 As this ulcer-inducing election enters the homestretch, early turnout numbers are breaking records. Tens of millions of Americans have already mailed in or dropped off their ballots or stood in lines to vote early.

That said, many of you out there have not yet voted. Maybe you’re even considering skipping the election altogether — because it’s harder to vote than it should be, because you’re too anxious and overwhelmed to think about electoral politics, because campaign robocalls and texts have pushed you over the edge into madness.

I feel you. But sitting this one out would be a huge mistake. Rarely have the stakes been so high and the differences between the presidential contenders so stark. A big win for Joe Biden would make clear that the nation is eager to move past the endless rage and chaos of the Trump era — and hopefully help ease the transition.

Need info on how to vote in your area? Check out The Times’s handy How To guide. Need motivation? Here’s an abridged list of reasons your vote is so crucial now.

1. Because when it comes to white supremacy, there are not “very fine people” on both sides.

2. Because children should never be kept in cages.

3. Because military service members are neither “losers” nor “suckers.”

4. Because China isn’t the one paying all those tariffs.

5. Because Mexico is never going to pay for that damn wall.

6. Because wearing a mask during a pandemic should not be a partisan issue.

7. Because QAnon is a dangerous, totally bonkers conspiracy theory that should be denounced.

8. Because the federal government should not be run by a bunch of “acting” officials chosen for their bootlicking abilities.

9. Because snowflakes belong on ski slopes, not in the Oval Office.

10. Because science is not the enemy.

11. Because there is no Deep State plotting to overthrow the president.

12. Because the Russia investigation was not a hoax.

14. Because the presidency should not be used as a platform from which to enrich the family business.

15. Because U.S. intelligence agencies should be trusted above Vladimir Putin.

16. Because congressional oversight of the executive is a constitutional duty, not a political annoyance to be dismissed.

17. Because outside of an Orwell novel, “alternative facts” are just lies.

18. Because not even automakers wanted looser emissions standards.

19. Because disinformation aimed at undermining faith in the American electoral system is what you expect from hostile foreign governments, not the U.S. president.

20. Because judges at all levels should be chosen for their qualifications, not for their ideology.

21. Because injecting patients with bleach is not a promising cure for Covid-19.

22. Because there are still hundreds of migrant children, snatched by the administration, who may never see their parents again.

23. Because the president should not be telling congresswomen of color to go back to the countries “from which they came.”

24. Because Greenland is not for sale.

25. Because a hurricane’s trajectory cannot be altered using a Sharpie.

26. Because the attorney general is not meant to serve as the president’s personal defense lawyer.

28. Because promising to protect coverage for pre-existing conditions — and even signing an impotent executive order on the issue — does not compensate for working to destroy the law that provides those protections.

29. Because transgender people have every right to serve in the military.

30. Because using tear gas and rubber bullets on peaceful protesters gathered near the White House so that the president can stage a photo op with a church and a Bible is not just shameful — it’s anti-democratic.

31. Because encouraging Americans to “liberate” themselves from their state and local leaders is dangerously irresponsible.

32. Because the answer to the crushing student debt problem isn’t to make it harder for students to obtain relief.

33. Because the Rose Garden shouldn’t be used to host super-spreader events.

34. Because obstructing a federal investigation is wrong.

35. Because — I hate to break it to you — the president’s allegedly fabulous health care plan is never coming. Not in two weeks. Not ever.

36. Because the peaceful transition of power is a cornerstone of our democracy.

37. Because the president should not play footsie, much less swap love letters, with bloodthirsty despots.

38. Because beneficiaries of the Deferred Action for Childhood Arrivals program deserve to stop living in fear and uncertainty.

39. Because the stock market is not the same thing as the economy.

40. Because the Proud Boys should not be encouraged to “stand by.”

41. Because Dr. Anthony Fauci is not “a disaster.”

42. Because the media is not “the enemy of the people.”

43. Because a president should grasp the difference between weather and climate.

44. Because a president should not solicit foreign interference in an election.

45. Because the president’s failure to bully Congress into funding his pet wall is no reason to shut down a swath of the federal government.

46. Because many thousands of Americans have died needlessly from Covid-19.

48. Because the census should not be weaponized for partisan purposes.

49. Because failing to test sufficiently for the coronavirus does not mean that there are fewer cases.

50. Because birtherism was, is and always will be racist drivel.

51. Because the coronavirus will not magically “disappear,” and the United States is not close to “rounding the turn.”

53. Because if your vote didn’t matter, certain people wouldn’t be trying so hard to take it away from you.

So vote, America. Vote like your lives — and the fate of the Republic — depend on it. Because they very well might.