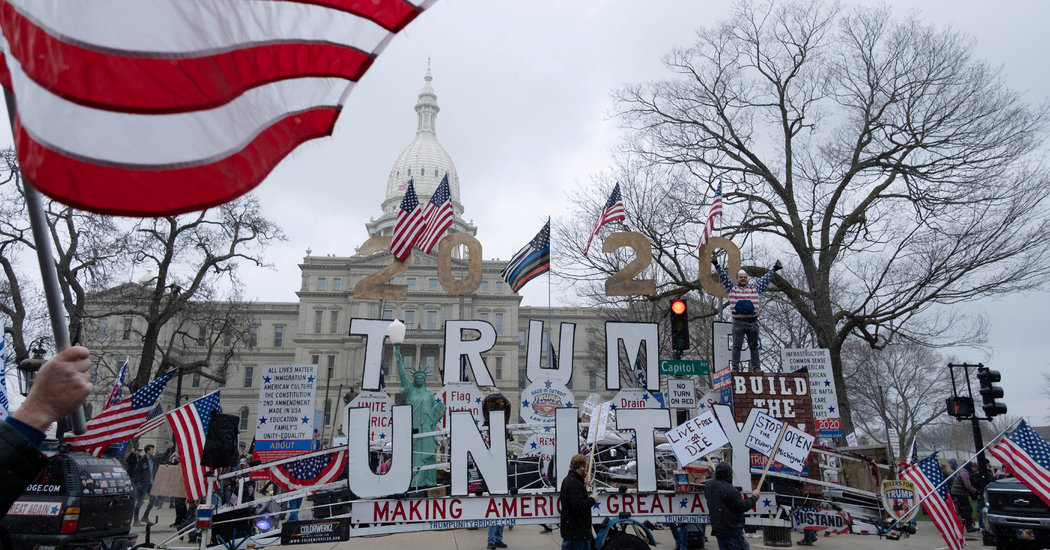 I first became aware of the political influence of Charles and David Koch in 2009 when I started looking into who was behind the protests at health care town halls.

The Tea Party, formed after America elected its first black president, used a series of health care town halls to spur angry Republicans to oppose the Affordable Care Act as a socialist takeover of American medicine. Little matter that it was modeled on a plan devised by Mitt Romney, a Republican, when he was the governor of Massachusetts.

Such false claims about the act have not aged well, as millions of Americans now depend on the law for health care coverage as the coronavirus contagion sweeps across the nation. And yet a Tea Party co-founder, Mark Meckler, is using the same tactics and same phony claims to stir his followers to protest against governors seeking to mitigate the Covid-19 death toll by closing businesses and banning public gatherings.

That public anger is both real and manufactured. The same was true in 2009, when the Koch fortune fueled the Tea Party’s attacks on the Obama administration’s health care law.

Still, the legend that the Tea Party was a spontaneous uprising took hold and continues to be peddled. As we face Tea Party 2.0, let’s not be fooled again.

The protests playing out now have the same feel as the Tea Party protests aided by Koch-financed Americans for Prosperity and others a decade ago — and with good reason: Early evidence suggests they are not organic but a brush fire being stoked by some of the same people and money that built the Tea Party.

Look no further than the first protest organized by the Michigan Conservative Coalition and the Michigan Freedom Fund — whose chairman manages the vast financial investments of Dick and Betsy DeVos, the Education Secretary — to see that the campaign to “open” America flows from the superrich and their front groups.

Stephen Moore — a fellow at the Heritage Foundation, a Koch ally and a Trump adviser — admitted as much in a video I obtained comparing these new protesters to Rosa Parks, as first reported in The Times.

Mr. Moore, who is now leading an enterprise to end the virus precautions called Save Our Country, which includes the Koch-backed American Legislative Exchange Council, boasted that he has been working behind the scenes with a conservative donor who agreed to cover bail and legal fees for demonstrators who get arrested for defying Wisconsin’s virus protective measures.

Others are providing legal assistance as well. The Times reports that a private Facebook group called Reopen NC has retained the legal services of Michael Best & Friedrich, a Wisconsin law firm whose clients include President Trump. The firm is well known for its work with dark-money groups that fought the recall of the Koch ally Gov. Scott Walker of Wisconsin and waged war on unions.

Then there’s the Convention of States, established in 2015 with a big contribution from the conservative hedge fund billionaire Robert Mercer. The group recruits activists at gun shows to support a balanced-budget amendment and is promoting the protests online via “Open the States.” COS is an offshoot of Citizens for Self-Governance, which Mr. Meckler co-founded with a longtime Koch operative, Eric O’Keefe.

To give you a flavor of what’s unfolding to help orchestrate these events, this week one of Mr. Meckler’s organizers told supporters via Facebook that “optics are everything” and that they should be sure to wear a mask to the protests and stand six feet apart — because it will make the crowds look bigger.

COS and a Koch-financed public relations firm, In Pursuit Of, are also purchasing domain names tied to protests to open the states, suggesting they are investing for a long battle — even as the death toll rises.

The consequences are already starting. One week after a Kentucky protest, the state experienced its largest spike in coronavirus cases. Other states may soon see similar spikes.

Those fanning these flames, including President Trump and Fox News hosts, are unlikely to get burned by infection themselves, though they may be goading their followers to risk their health by attending mass demonstrations.

America is now facing three calamities: a deadly contagion, a capricious president and a well-funded right-wing infrastructure willing to devalue human life in pursuit of its political agenda. Some very rich men and women are making this medical disaster worse through their reckless bellows, inflaming people to demand that states open now no matter how many lives that costs.

Lisa Graves is the executive director of True North Research and curator of KochDocs, and a former deputy assistant attorney general in the Office of Legal Policy at the Department of Justice.