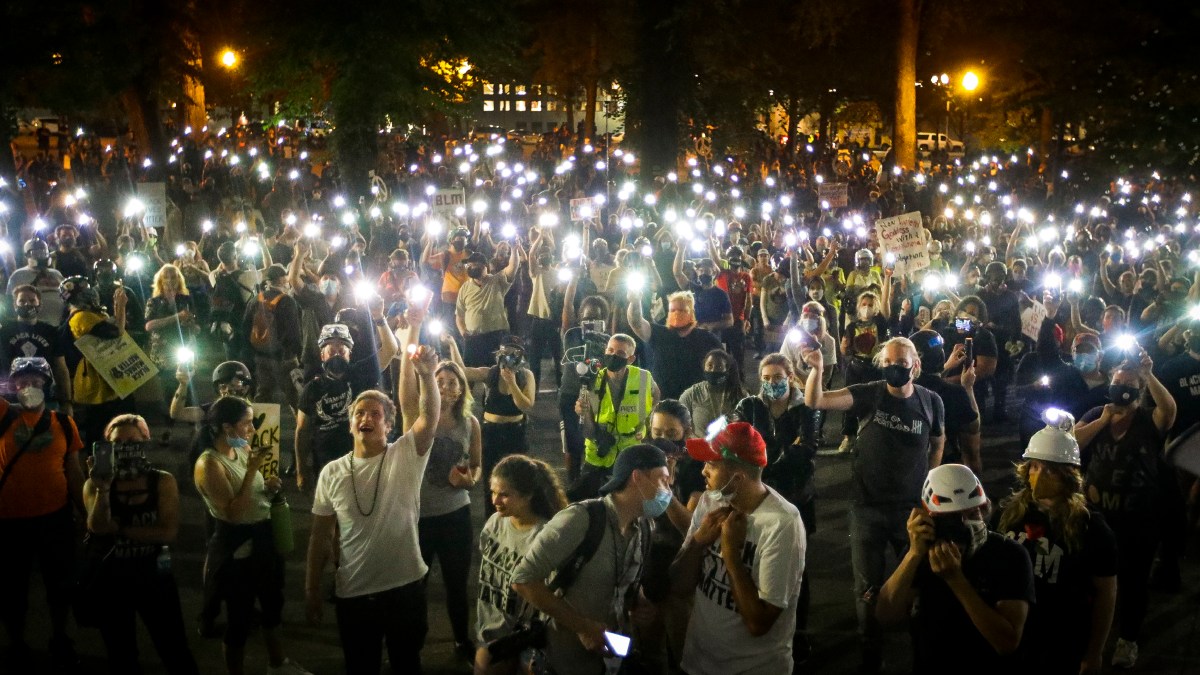 Oregon police took over protecting a federal courthouse in Portland that’s been a target of violent protests as local authorities try to tamp down demonstrations that have wracked the city every night for more than two months following the killing of George Floyd.

Having state and local officers step up their presence was part of a deal between the Democratic governor and the Trump administration that aimed to draw down the number of U.S. agents on hand during the unrest.

Portland police cleared out a park Thursday morning across from the Mark O. Hatfield Federal Courthouse that demonstrators have used as a staging ground but reopened the park shortly before dark.

By 10:30 p.m., hundreds of people had gathered and were listening to speeches in front of the Justice Center, a building that is one block over from the courthouse and houses city and county law enforcement offices. There was no sign of state troopers or local police and the crowd remained peaceful.

Under the deal announced by Gov. Kate Brown, federal agents sent by President Donald Trump were to begin a phased withdrawal, with Oregon State Police taking over outside the building. But federal officials insist agents wouldn’t leave the city completely but be on standby in case they’re needed.

Trump said in a tweet that U.S. officers would stay in Portland until the violence was under control.

“If she can’t do it, the Federal Government will do it for her. We will not be leaving until there is safety!” Trump wrote about Brown, saying that she wasn’t doing enough to control the “anarchists & agitators.”

Alicia Goss, who said she had been to 60 consecutive nights of protests, said late Thursday she was skeptical of the deal.

The federal officers sent into Portland, Oregon, by the Trump Administration to crack down on protests have been behaving in unpredictable ways that have caused confusion and fear in the city, said Celina Tebor, a reporter from the Oregonian. But she said the protests seem to have been only reinvigorated by their presence.

Jaleel Oneman waited for speeches to begin as the crowd grew earlier in the evening and said he didn’t expect much difference between the federal agents and state police who would be patrolling the protesters Thursday for the first time.

In preparation for the handover, state troopers, the local sheriff and Portland police met and agreed not to use tear gas except in cases where there’s a danger of serious injury or death, Mayor Ted Wheeler said. Federal agents sent to the city in early July have used it nightly as protesters lob rocks, fireworks and other objects.

Wheeler, who himself was gassed when he joined protesters outside the courthouse last week, added that tear gas “as a tactic really isn’t all that effective” because protesters have donned gas masks and often return to the action after recovering for a few minutes. The Democrat also apologized to peaceful demonstrators exposed to tear gas used by Portland police before federal officials arrived.

Police Chief Chuck Lovell said he believes the new collaboration between local law enforcement agencies will be seen “as a victory in many ways.”

“A lot of people came out to express their displeasure of folks from the federal government here and engaging in crowd control with members of our community,” Lovell said. “So I’m hoping that on many levels that people are happy in this development.”

Lovell said he is “very happy and very hopeful” with the collaboration between city and state police and Multnomah County Sheriff’s Department.

“We have trained and worked with Oregon State Police and crowd control events extensively, throughout the years,” Lovell said.

Portland has seen demonstrations since Floyd died in May after a white Minneapolis police officer pressed a knee into the Black man’s neck for nearly eight minutes.

Demonstrations have at times attracted up to 10,000 people for peaceful marches and rallies around the city. But some protesters have turned to violence that’s been increasingly directed at the courthouse and other federal property.

Journalist Tuck Woodstock has been on the ground in Portland covering protests in the city, and putting their own safety in danger to do so. Woodstock joined LX News to talk about the importance of independent and volunteer journalists to tell this story, and what they are seeing on the streets.

The Trump administration sent federal agents to guard the courthouse earlier this month and quell the unrest but the deployment had the opposite effect, reinvigorating protesters who found a new rallying point in opposing the federal presence.

The U.S. government had arrested 94 people as of Wednesday. During the past two months of protests, Lovell said the city police department has made more than 400 arrests and undertaken many different strategies in an attempt to deescalate the situation.

Sara Cline contributed to this report from Salem. Cline is a corps member for the Associated Press/Report for America Statehouse News Initiative. Report for America is a nonprofit national service program that places journalists in local newsrooms to report on under-covered issues.”