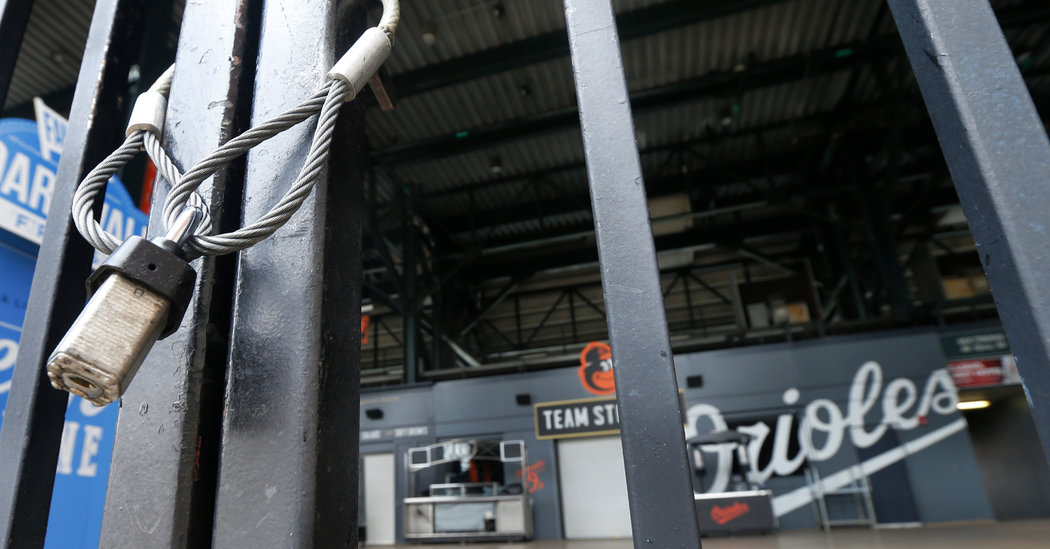 Major League Baseball announced Monday night that it would impose a 2020 schedule on the players after nearly three months of rancorous talks with the union ended without a negotiated settlement.

The league did not specify the length of the schedule but said in a statement that it wanted players to report to their home ballparks by July 1 for training camp. If they do — and if the union signs off on health protocols — the schedule would be for 60 games, most likely starting July 24.

The league and the union exchanged proposals last week, with Commissioner Rob Manfred offering a 60-game schedule, 104 percent of prorated salaries for players and several other elements, including an expanded playoff field and a universal designated hitter. The players overwhelmingly rejected Manfred’s plan in a vote earlier Monday evening.

Manfred said again Monday that he and Tony Clark, the executive director of the players’ union, had developed an “agreement framework” last week, when Manfred flew to Arizona to meet with Clark in person. The union vigorously disputed that characterization, and Manfred framed Monday’s rejection as something of a betrayal.

“Needless to say, we are disappointed by this development,” Manfred said in a statement. “The framework provided an opportunity for M.L.B. and its players to work together to confront the difficulties and challenges presented by the pandemic.”

The union’s rejection, Manfred said, means that many items included in the proposal — expanded playoffs, a universal designated hitter, 104 percent of prorated salaries, $25 million from a playoff pool and $33 million in forgiven salary advances — would not be in place in 2020. There also will be no advertising patches on uniforms, a provision that was also in the proposal.

The owners continually pushed for a shorter schedule because they would lose revenue by staging regular-season games without fans in attendance while the pandemic continues, and players did not budge from their demand for full prorated pay, which many of the owners’ proposals did not include. The players’ last proposal was for 70 games, and the owners would not consider it.

However many games Manfred imposes, the union seems likely to file a grievance seeking substantial payouts to players, on the grounds that the league negotiated in bad faith. The union would have had to drop its right to litigation as a condition of the proposal it rejected on Monday, a concession they viewed as too great, because Manfred was likely to implement a truncated schedule either way.

“The full Board reaffirmed the players’ eagerness to return to work as soon and as safely as possible,” the union said in a statement. “To that end we anticipate finalizing a comprehensive set of health and safety protocols with Major League Baseball in the coming days, and we await word from the league on the resumption of spring training camps and a proposed 2020 schedule.”

Trevor Bauer, the outspoken Cincinnati Reds pitcher, expressed the exasperation felt by some on both sides of the negotiations in a tweet Monday evening, writing, “It’s absolute death for this industry to keep acting as it has been. Both sides. We’re driving the bus straight off a cliff. How is this good for anyone involved?”

The league gave the players a 67-page manual on health and safety provisions last month, and the union has not approved it. Manfred said in his statement Monday that he wanted an answer on those protocols by 5 p.m. on Tuesday.

M.L.B. shut down all teams’ spring training complexes over the weekend for extensive cleaning after players on several teams — including five members of the Philadelphia Phillies — tested positive for the coronavirus. Teams would train at their home ballparks instead of their complexes in Florida and Arizona before the season begins.

The backdrop of the negotiations has been a return-to-play agreement negotiated in March that the sides have interpreted in vastly different ways. The players agreed to forgo their salaries until games began in exchange for a full year of service time in the event no season was held.

But Manfred expected further salary concessions for a season played without fans in the stands, and the union — long skeptical of owners crying poor — has not budged, wary of setting a precedent that would weaken them in the next collective bargaining agreement.

The players believe the existing C.B.A., which expires in December 2021, is far too favorable to management. Owners seem unlikely to spend lavishly on free agents this off-season, and could try to flood the market by letting go of many players eligible for salary arbitration.

The combined impact of all these factors — the failed negotiations of the last three months, a potentially looming depressed free-agent market, the union’s resolve to gain ground in the next C.B.A., and the mutual distrust between Manfred and the players — makes for an ominous landscape for baseball’s near future.