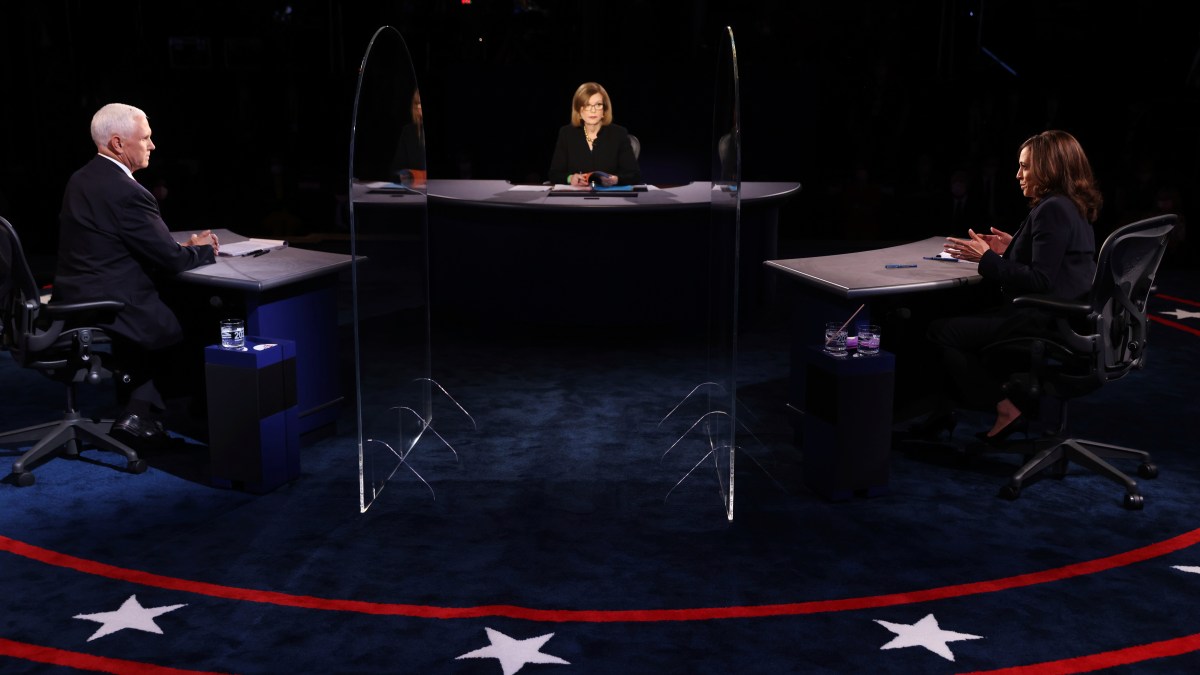 They met on a debate stage in Salt Lake City on Wednesday while Trump remained in the White House with COVID-19, still contagious under official guidelines though he declared himself cured.

Here are some of the top exchanges of the night:

The debate began more civilly than the first presidential debate last week, when President Donald Trump interrupted repeatedly, throwing the night into chaos and prompting the Democratic nominee Joe Biden to tell him, “Will you shut up, man.”

When Pence refused to stop speaking, Page told him that his campaign had agreed to the rules, which she was trying to enforce.

Pence continued to interrupt. By the end of the debate, Pence interrupted Harris 16 times while Harris interrupted Pence 9 times, according to NBC News.

During the vice presidential debate Wednesday, Vice President Mike Pence and Sen. Kamala Harris, D-Calif., discussed the Trump administration’s response to the coronavirus pandemic. Both candidates also discussed what their respective administrations would do come January 2021.

Who Should Pick the Next Justice

Vice President Mike Pence tried but failed to pin down Sen. Kamala Harris on whether the Democrats would “pack” the court – or add justices to the U.S. Supreme Court – if Judge Amy Coney Barrett is confirmed before the end of the year and Democrats win the November election.

Some Democrats have begun talking about adding justices as an answer to Sen. Mitch McConnell’s drive to push conservative candidates onto the courts. McConnell refused to consider President Barack Obama’s candidate for the U.S. Supreme Court, Merrick Garland, in the last year of Obama’s term, but is now rushing Barrett’s nomination through the Senate.

Harris answered instead by talking about President Abraham Lincoln, who declined to nominate a candidate 27 days before an election. The election should determine who replaces Justice Ruth Bader Ginsburg, she said.

“Joe and I are very clear,” she said. “The American people are voting right now. It should be their decision.”

Lincoln eventually made his nomination to replace Chief Justice Roger B. Taney who had died 27 days before the 1864 presidential election. Lincoln delayed his pick of Salmon P. Chase until after he won reelection, The New York Times reported.

Pence insisted that the record show Harris had not answered his question about “packing” the court.

But he also did not answer the original question posed to him: What would he do to protect Americans with pre-existing conditions if the Affordable Care Act is overturned by the U.S. Supreme Court? The Trump administration is in court arguing for that to occur.

Vice President Mike Pence and Sen. Kamala Harris, D-Calif., were asked Wednesday what they would want their home states to do if Roe v. Wade were overturned and how they would handle Judge Amy Coney Barrett’s nomination to the Supreme Court.

To Whom Does Trump Owe?

Sen. Kamala Harris asked who President Donald Trump owes money to, arguing the American people have a right to know so that they can decide whether the president will put their interests above his own.

She referred to an article from The New York Times, which obtained more than 20 years of tax return data that Trump has repeatedly refused to release and is now in court trying to block the district attorney in New York City from obtaining.

The Times in September reported that Trump owes more than $300 million in loans for which he is personally responsible that are due in the next four years.

“It’d be really good to know who the president of the United States, the commander in chief, owes money to because the American people have a right to know, what is influencing the President’s decisions?” Harris said. “And is he making those decisions in the best interest of the American people, of you? Or self-interest?”

Vice President Mike Pence repeated Trump’s statement that the reporting was not accurate without specifying what was incorrect and said the president has paid millions of dollars in payroll and other taxes.

During the vice presidential debate Wednesday, Sen. Kamala Harris, D-Calif., and Vice President Mike Pence discussed their campaign’s differing stances on income taxes and how to bring about job growth.

Sen. Kamala Harris said that Joe Biden would not ban fracking, would not increase taxes on anyone who makes less than $400,000 a year and would prioritize strengthening the economy by creating new jobs in clean and renewable energy.

“Let’s talk about who is prepared to lead our country over the course of the next four years on what is an existential threat to us as human beings,” Harris said. “Joe is about saying we’re going to invest that in renewable energy; what’s going to be about the creation of millions of jobs. We will achieve net zero emissions by 2050, carbon neutral by 2035. Joe has a plan.”

Pence, when asked about climate change, said that, “The climate is changing but the issue is what’s the cause and what do we do about it.”

Scientists are largely in agreement that climate change has been accelerated by human activity.

NBC News reports that 2020 is on track to be one of the warmest on record, according to the National Oceanic and Atmospheric Administration. NOAA previously found that each of the past five years had been among the warmest since record-keeping began in 1880.

Pence repeatedly said that a Biden administration would ban fracking, increase taxes and crush America’s energy industry, all claims Harris rejected and that Biden has said is not true.

“I’m very proud of our record on the environment and on conservation,” Pence said. “President Trump and I will keep America growing.”

Vice President Mike Pence and Sen. Kamala Harris, D-Calif., discussed how their respective administrations would combat climate change. Pence was specifically asked if he believed climate change was real, and Harris was asked if she supported the Green New Deal.