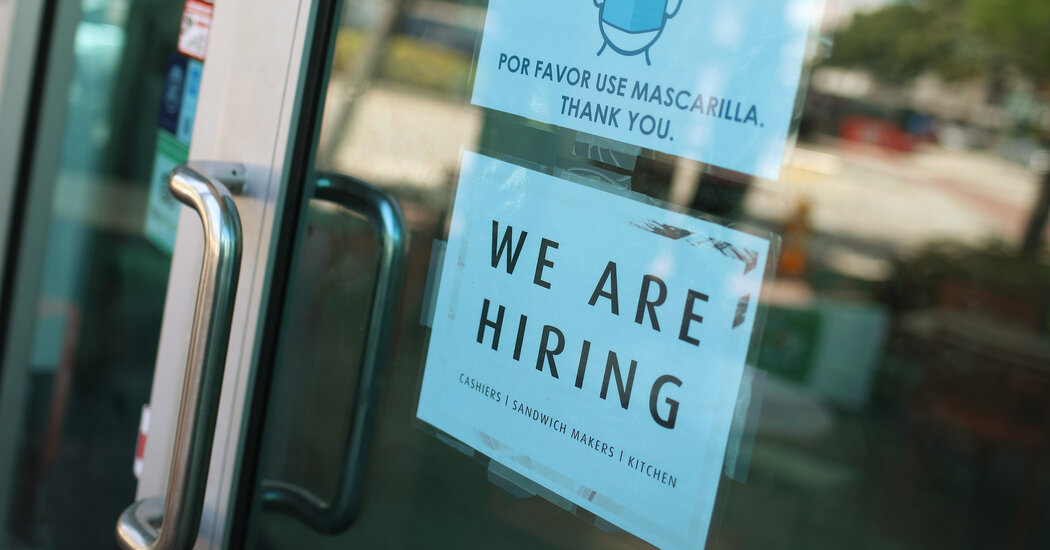 The April jobs report was released on Friday and it showed considerably slower jobs growth than expected. In April, the American economy produced 266,000 jobs compared with 770,000 in March and 536,000 in February. The disappointing numbers relative to elevated expectations — some economists thought we might see as many as two million new jobs — has invited politically convenient labor market narratives.

While there are a number of solid, if nuanced, explanations for the big jobs miss, many commentators and business interests have, unsurprisingly, decided that unemployment insurance is the primary cause of the weak employment numbers. In their eyes, the weekly $300 federal unemployment insurance supplement, which is set to expire in September, is allowing low-wage workers to demand unrealistically high wages and elect to stay home if they don’t get them. That, they say, is slowing the recovery. But does this narrative fit the facts?

In fact, the industries that accounted for the bulk of the slowdown in payroll gains were within the middle of the wage spectrum: $18.50 to $31.50.

Whatever the cause of the April slowdown in job growth — one that could easily prove to be statistical noise — it is unlikely that the extra federal benefits are the primary explanation. We are still, after all, in a pandemic.

Many workers report that they remain hesitant to return to jobs, especially in high-contact sectors. Supply chain bottlenecks across industries — like automakers dealing with a semiconductor shortage — have been weighing on hiring and expansion efforts. The pressures of child care and the rollout of vaccinations, which were only recently opened to the entire adult public, are still playing a major role in workers’ lives. Jobs data are also subject to substantial revisions, even in the best of times. And the volatility caused by the Covid-19 crisis has greatly hampered data gathering.

Regardless, we know at least this much from the report: There is no meaningful connection between the average wage in a given industry and the extent to which employment growth in it sped up or slowed down in April.

For a broader understanding of why tracking the labor market can be so tricky and why drawing sweeping conclusions from any one report is misguided, it’s helpful to dive into how institutions that track the work force use different surveys to analyze where things stand for workers and businesses.

The unemployment rate — a deeply imperfect indicator with which everyone is familiar — is assembled from the Current Population Survey, also known as the “household survey.” The Bureau of Labor Statistics calls a representative selection of households and asks them about their employment status. It is rarely subject to drastic revisions, and the survey can provide a reasonable, real-time guide to the health of the labor market.

However, this is not the data-gathering process for the closely watched monthly payroll estimates, often called jobs reports, that April’s headline-grabbing big miss is based on. For these estimates, the Bureau of Labor Statistics calls business establishments, rather than households, to collect information about their number of workers, the total hours employees worked in a week and how much money employers spent on payroll. Data derived from this survey often experiences significant revisions month-to-month as a result of improved sampling receipts and better data for extrapolating from the sample to population-level estimates.

While this survey, known as “the establishment survey,” is important, it does a terrible job at establishing consistent stories about the labor market. This is clearly visible in April’s jobs report, which dramatically revised the headline numbers for February and March. According to the initial, unrevised, headline-grabbing reports, the economy gained about 379,000 jobs in February and about 916,000 jobs in March. However, if we look at the most recent revisions, we’ll see that the economy roughly gained a whopping 568,000 jobs in February and only about 770,000 jobs in March. Instead of a slow February and incredible March, we see more uniform monthly growth. Different story, right?

Building a master narrative based on a single jobs report may be appealing and politically convenient. But if you’re intent on building a labor-market narrative on the basis of a single payroll release, it should at least match the headline data and the industry-level dynamics.

Though the news has been flush with business interests complaining that they can’t find workers, the numbers, if you look closely, tell a different story. Policy should be made using the data we have, and so lawmakers should note that the data, for now, doesn’t show that the relief they’ve dispersed has caused a clear disincentive that’s hurting the economy.

If we had good evidence that the temporary supplement to unemployment benefits was making it harder to fill certain jobs, that fact should motivate a deeper inquiry: Do those jobs adequately compensate prospective employees for the effort they would exert and the risks they would have to bear? As President Biden said in a recent speech, “People will come back to work if they’re paid a decent wage.”

Skanda Amarnath is the director of research and analysis at Employ America. He has worked as a vice president at MKP Capital Management and as an analyst at the Federal Reserve Bank of New York.