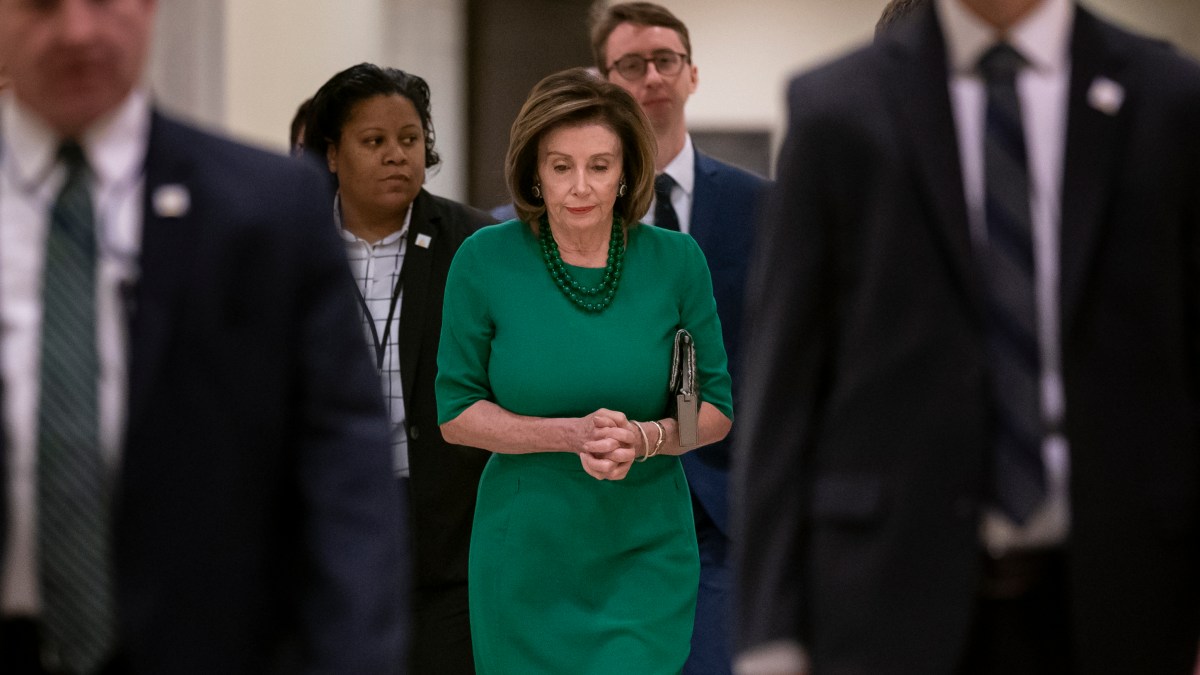 House Speaker Nancy Pelosi says that she and the Trump administration are close to agreement on a coronavirus aid package to reassure anxious Americans by providing sick pay, free testing and other resources, hoping to calm teetering financial markets amid the mounting crisis.

Final details were being worked out, but the top House Democrat, who held daylong talks with Treasury Secretary Steven Mnuchin, expected an announcement Friday. The House could then swiftly vote.

“We have — are near — to an agreement,” Pelosi said, emerging from her office at the Capitol shortly before 9 p.m. Thursday.

The potential deal between Congress and the White House would cap a tumultuous week in which Washington strained for a comprehensive response to the outbreak that is testing the nation’s political, financial and health care systems.

It builds on an emergency $8.3 billion package approved last week and is aimed at providing additional health and financial resources to arrest the sudden spread of the pandemic and the kind of economic fallout unseen in a generation. Pelosi promised in a letter to colleagues that a third package was yet to come.

The new sick leave benefit would require businesses to provide up to 14 days of paid leave to workers who are home quarantined with the virus, with the federal government reimbursing them through tax credits. The bill enhances unemployment benefits for the jobless and boosts food and nutrition programs for working families, students and seniors.

The late announcement was intended to boost confidence, Democrats said.

“We felt that putting together something that the American people can see cooperation on between the two parties in this difficult moment would be a confidence builder,” said Rep. Richard Neal, D-N.J., the chairman of the Ways and Means Committee, joining Pelosi at the Capitol, “and I think that we approached it that way.”

Meanwhile, the Capitol, White House and Supreme Court all declared themselves off limits to the public for now, symbols of a nation hunkering down.

Democrat Joe Biden, President Donald Trump’s chief rival, criticized him for playing down the threat for weeks and promised if he becomes president to “always tell you the truth.”

Amid a wave of closures and cancellations, the coronavirus question got personal for Trump and some members of Congress.

Just days after meeting Trump and Sen. Rick Scott, R-Fla., the communications chief for Brazil’s president, Fábio Wajngarten, tested positive for the coronavirus. A photo of the president, the senator and Wajngarten shows the trio shoulder-to-shoulder at Trump’s Mar-a-Lago resort last weekend.

Democratic candidate for president, Bernie Sanders discusses the coronavirus pandemic and the need to come together and listen to the experts, not the politicians.

It was the first time someone infected with the virus was known to have been in close proximity to the president.

“We had dinner in Florida at Mar-a-Lago with the entire delegation,” Trump told reporters at the White House. “But we did nothing very unusual. We sat next to each other for a period of time.” Asked whether he should be tested, Trump replied, “I am not concerned.”

White House spokeswoman Stephanie Grisham said “the White House is aware of public reports that a member of the Brazilian delegation‘s visit to Mar-a-Lago last weekend tested positive for COVID-19” though; confirmatory testing is pending.

She said: “Both the President and Vice President had almost no interactions with the individual who tested positive and do not require being tested at this time.” GOP Sen. Lindsey Graham, who was also at Trump’s club on the weekend, joined a growing list of lawmakers who have chosen to isolate themselves as a precaution.

Former Vice President Joe Biden discusses how he would handle the coronavirus pandemic if he was elected president.

On Wednesday, Trump announced a month-long restriction on travel from most of Europe, set to begin at midnight Friday night. He said Thursday that he was considering other major restrictions, such as limiting travel to domestic hot spots like California and Washington state, without spelling out how he would manage such an extraordinary effort. The State Department issued a global advisory cautioning U.S. citizens to “reconsider travel abroad.”

So far, the administration’s haphazard response and the stalemate in Congress have resulted in more uncertainty as the crisis roils the financial markets and rewrites daily life for Americans.

Biden and Bernie Sanders, the other main contender for the Democratic presidential nomination, delivered their own speeches the day after Trump’s prime-time address to the nation.

Biden called for free virus testing, temporary pop-up hospitals and paid leave for all Americans to help cover paychecks as workers self-quarantine, care for the ill or lose jobs over the virus.

President Donald Trump said Wednesday the U.S. would suspend travel from Europe, with the exception of the United Kingdom, for 30 days to curb the spread of coronavirus. After Trump’s address, the U.S. Department of Homeland Security said the restrictions only apply to foreign nationals and not U.S. citizens, green card holders or the family of U.S. citizens. He also called on Congress to provide Americans payroll tax relief.

“No president can promise to prevent future outbreaks, but I can promise you this, when I’m president we will be better prepared, respond better and recover better,” Biden declared.

As talks between Pelosi and Mnuchin continued, lawmakers from both parties expressed alarm after what they called heated and testy briefings with Dr. Anthony Fauci, infectious disease chief at the National Institutes of Health, and other public health officials. Lawmakers were particularly frustrated that U.S. officials have tested relatively few patients.

As classes, sports events, concerts and conferences were canceled across the nation, Trump said he will halt his signature campaign rallies, telling reporters he needs a “little separation until such time as this goes away.” Biden and Sanders said they would no longer hold large political gatherings and their staffs would work from home as the race for the presidency moved online.

Canadian Prime Minister Justin Trudeau and his wife, Sophie Grégoire Trudeau, announced on Thursday that they are imposing self-isolation as Sophie Grégoire tested positive for COVID-19.

The storied Smithsonian said it was canceling all public events and will temporarily close its network of museums and the National Zoo, starting Saturday. And Trump proposed postponing this summer’s Olympics in Japan for a year, too.

The financial markets endured another day of alarming slides and the Federal Reserve moved to try to ease the disruptions by announcing that it will sharply increase its purchases of short-term Treasury bonds.

The vast majority of people recover. According to the World Health Organization, people with mild illness recover in about two weeks, while those with more severe illness may take three to six weeks to be over it.

While Trump said all European travel except from Britain would be cut off, there were clarifications and criticisms of the cornerstone of his attempt to curtail the crisis.

Homeland Security officials said the new travel restrictions would apply only to most foreign nationals who have been in the Schengen Area at any point in the 14 days prior to their scheduled arrival to the United States. The area encompasses most European countries, among them France, Italy, German, Greece, Austria and Belgium.

The restrictions don’t apply to legal permanent residents, immediate family of U.S. citizens or others identified in the proclamation signed by Trump. Vice President Mike Pence said the administration is also asking travelers returning to the U.S. from Europe to voluntarily quarantine for 14 days.

But some health officials, and even a former high-ranking Trump administration official, suggested Trump’s European travel restriction was futile because the virus is already widespread on U.S. soil.

Trump claimed falsely Thursday that the U.S. is currently screening all Americans and foreigners who are entering the country, saying, “people coming in have to be tested.” And he claimed that those who return are being forced to isolate themselves, adding: “It’s going to be a pretty strong enforcement of quarantine.” No widespread quarantine orders have been announced.