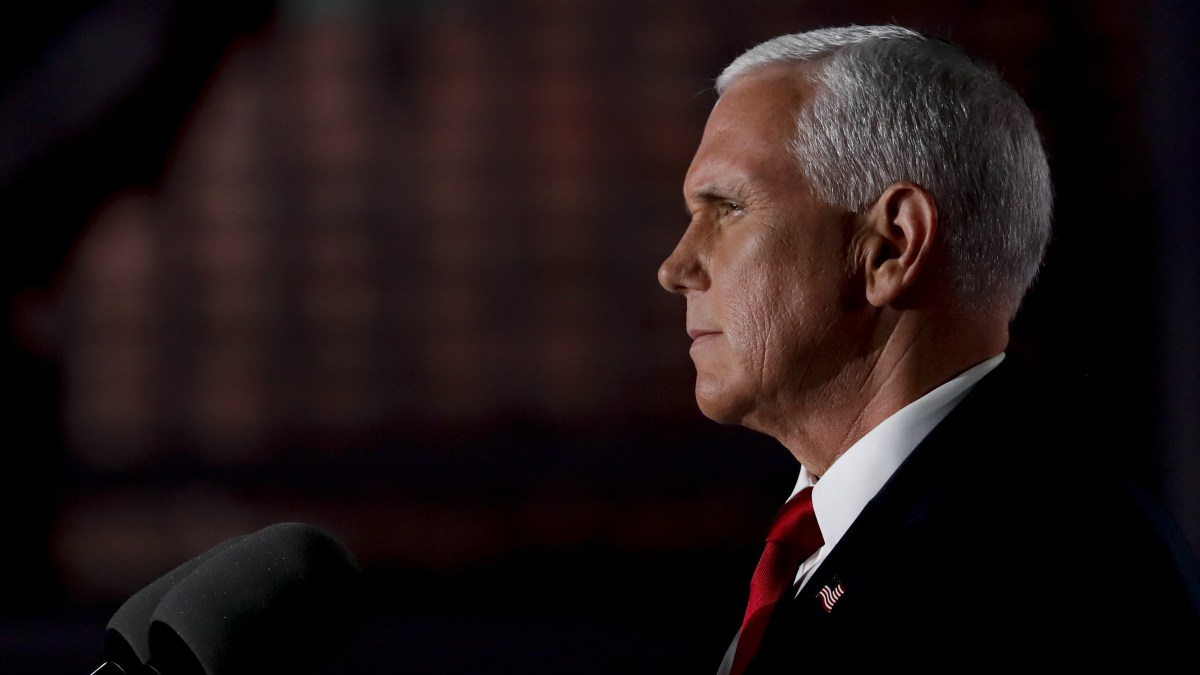 “I spoke to the president a little while back. He sounded great,” Pence told reporters at Joint Base Andrews before heading west to Utah for this week’s vice presidential debate.

“When the president told me that he was headed back to the White House, he told me to head to Utah. And we’re looking very much forward to the vice presidential debate,” he said. “The stakes in this election have never been higher and the choice has never been clearer.”

The spotlight on Pence will be especially bright Wednesday when he participates in the vice presidential debate with California Sen. Kamala Harris. Pence will almost certainly be pressed to explain shifting accounts of the president’s health over the weekend and justify Trump’s decision to hold large in-person campaign rallies during a pandemic — events that often flouted public health guidelines by congregating thousands of mostly mask-less supporters.

“Normally, the vice presidential debate is inconsequential. That is not the case in 2020,” said Alex Conant, a Republican strategist who worked on Florida Sen. Marco Rubio’s 2016 presidential bid. “The public has so many questions about how we got here and it’s an opportunity for Pence to answer some of those.”

Pence has often been called upon to smooth over fallout from Trump’s messy decision making and divisive policies. Since the 2016 campaign, he has served as a bridge of sorts between a brash, thrice-married former reality television star who long bragged about womanizing and the more traditional branch of the Republican Party, particularly conservative evangelicals.

The smooth diction and humble demeanor Pence brings to the role was honed in the 1990s as a conservative talk-radio host in Indiana, when he referred to himself as “Rush Limbaugh on decaf.”

His approach hasn’t always been successful. As Indiana’s governor from 2013 to 2017, he was so relentlessly on-message that he sometimes struggled to contain fallout from fast-moving crises.

That includes his handling of backlash over a 2015 law he signed that allowed business owners to deny service to gay people for religious reasons, which was later amended as a result of the uproar. During an interview with George Stephanopoulos on ABC when he was governor, Pence grew flustered after failing to answer direct questions about whether discrimination against gay people should be legal.

“George!” Pence protested before letting out an audible sigh. “C’mon.”

The debate with Harris will be a major test. The former California prosecutor’s political rise was fueled by searing exchanges with political rivals during major congressional hearings. And she is certain to press the issue of the virus and Trump’s diagnoses when the two meet in Salt Lake City.

“That will be his challenge. But it is one he is well-suited for,” said Cam Savage, a veteran Republican strategist from Indiana who has closely observed Pence’s political career. “With Pence you get a very disciplined leader who is not likely to make mistakes.”

One major uncertainty is what sort of condition Trump will be in during the weeks ahead. His administration has offered rosy assessments of his health, but Trump’s blood oxygen level abruptly dropped twice in recent days and he was given supplemental oxygen before his hospitalization.

There are also concerns that Pence could himself could catch the virus while campaigning, a troubling scenario that raises serious questions about national security and the transfer of power if either he or Trump took a turn for the worse.

After the debate, Pence says, it’s back to “business as usual” and the campaign has appearances planned for him, as well as Trump’s children and other top surrogates, in an effort billed as “Operation MAGA.” Pence is slated to visit Arizona and Florida and will return to Indiana on Friday to vote early.

“We’ve got a campaign to run,” Pence said Saturday on a call with staff. “I promise you, this president, as soon as his doctors say so, he’s going to be back out there.”

He has been a faithful servant to Trump since he was plucked from a difficult bid for reelection as governor to join the presidential ticket in 2016.

Though Pence has long-held presidential ambitions, his own political career was on the ropes.

The former congressman turned governor had a dismal approval rating. His enthusiastic support for religious conservative cultural issues alienated moderate Republicans and drew threats of boycott of the state. And he faced a difficult reelection battle against the same Democrat that he narrowly beat in 2012.

His selection for the Trump ticket removed him from a lackluster campaign that leaned heavily on car racing metaphors that often fell flat even though the state has a deep affinity for the sport and is home to the Indianapolis 500.

As Trump’s envoy to religious conservatives, Pence quickly revitalized his political prospects. Often referencing the Supreme Court, Pence reminded fellow religious conservatives that the future makeup of the judiciary would be determined by the 2016 winner — a prediction poised to become reality with Trump’s nomination of Amy Coney Barrett to replace liberal icon Ruth Bader Ginsburg.

After the “Access Hollywood” video emerged in 2016 of Trump talking in lewd terms about grabbing women by their genitals without consent came to light just days before a debate, Pence’s mere return to the campaign trail was a signal of support.

Whether Trump secures another term or not, Pence is a likely Republican presidential contender in 2024. His handling of the challenges before him could be a determining factor in what his future will bring.

“We will find out in the next few days whether Pence will be a leading candidate in 2024,” said Conant, the Republican strategist.