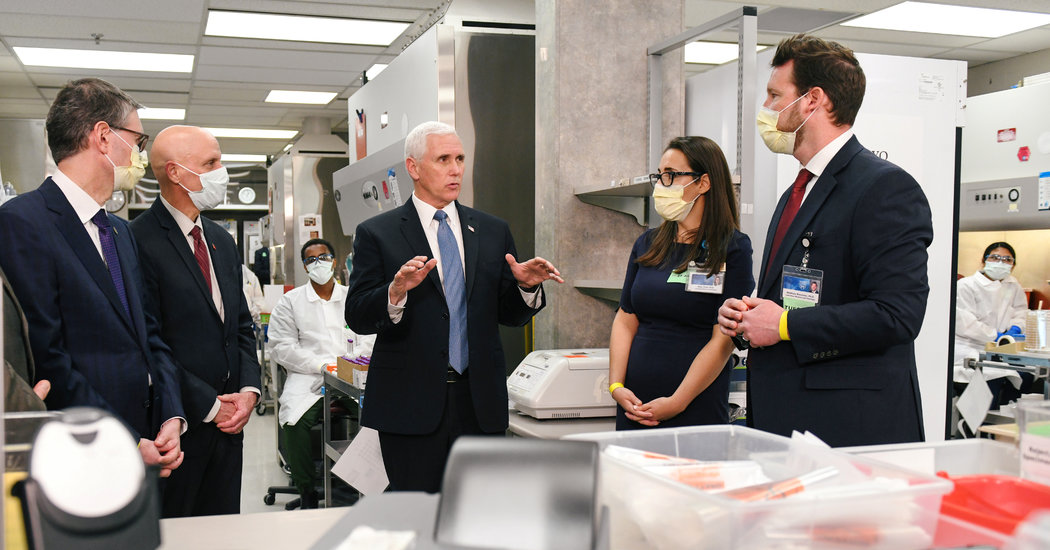 WASHINGTON — The Mayo Clinic, the renowned medical center in Minnesota, has a clear policy in place during the coronavirus outbreak that any visitor should wear a protective face mask.

But when a delegation of Trump administration officials arrived at the clinic on Tuesday to thank the doctors there for their work on the virus, one person decided to flout the rule: Vice President Mike Pence, the chairman of the White House coronavirus task force.

Stephen M. Hahn, the commissioner of the Food and Drug Administration, wore a mask as did other administration officials and members of the clinic’s staff. Mr. Pence stood out as the only person with his face uncovered as he toured the virology laboratory’s labeling area and spoke to a clinic staff member who had recovered from the coronavirus. Mr. Pence also participated in a round table with local officials and Gov. Tim Walz of Minnesota, who were also wearing masks.

After his visit, the Mayo Clinic posted on Twitter that it had “informed @VP of the masking policy prior to his arrival today.” The clinic then deleted the tweet, with no explanation.

It was the latest example of Mr. Pence’s refusal to don a face mask even as he travels the country representing the administration. This month, he was photographed arriving in Colorado Springs and being greeted by the Democratic governor of Colorado, Jared Polis, who wore a face mask emblazoned with images from his state flag. Mr. Pence tapped elbows, but kept his face bare.

Mr. Pence later defended his maskless appearance at the Mayo Clinic to reporters.

His aides in the past have said the guidelines were meant to protect people from asymptomatic spread. Because Mr. Pence is tested regularly, they said, he is not asymptomatic. Mr. Pence did not explain why he chose not to honor the Mayo Clinic’s own guidelines for its facility.

But public health experts dismissed his argument for skipping a face mask as faulty.

Even in coronavirus patients who show symptoms, diagnostic tests may detect the virus only 75 percent of the time, said Dr. Mark Loeb, a microbiologist and infectious disease specialist at McMaster University in Ontario, Canada, and it is unclear how sensitive the tests are in asymptomatic cases.

Mr. Pence was immediately rebuked by the administration’s critics.

American Bridge, a progressive group, called for Mr. Pence to be removed from the coronavirus task force, which he oversees. “He just didn’t care enough about the health and safety of doctors, nurses, and patients to follow their guidance,” said Kyle Morse, a spokesman for the group. “Pence, like Donald Trump, thinks the rules don’t apply to him.”

But he has one important ally — President Trump.

Mr. Trump has traveled only once since his administration released its federal guidelines advising against unnecessary travel. But he has made it clear, both in public and in private, that he believes face masks are not necessary and does not plan to use one himself.

“Wearing a face mask as I greet presidents, prime ministers, dictators, kings, queens — I don’t know,” he has said. “Somehow, I don’t see it for myself.”