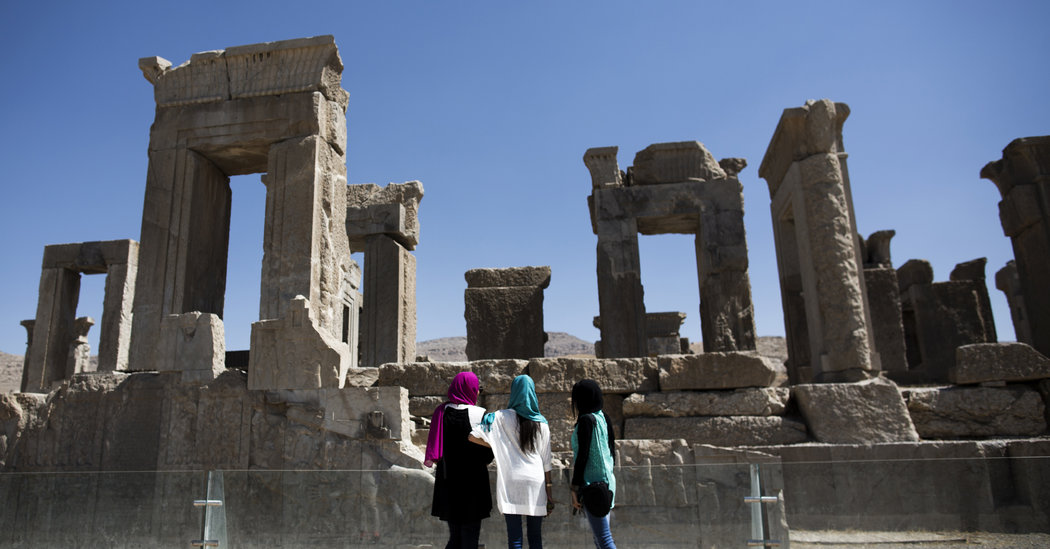 WASHINGTON — Defense Secretary Mark T. Esper sought to douse an international outcry on Monday by ruling out military attacks on cultural sites in Iran if the conflict with Tehran escalates further, despite President Trump’s threat to destroy some of the country’s treasured icons.

Mr. Esper acknowledged that striking cultural sites with no military value would be a war crime, putting him at odds with the president, who insisted such places would be legitimate targets. Mr. Trump’s threats generated condemnation at home and abroad while deeply discomfiting American military leaders who have made a career of upholding the laws of war.

The furor was a classic controversy of Mr. Trump’s creation, the apparent result of an impulsive threat and his refusal to back down in the face of criticism. When Mr. Trump declared on Saturday that the United States had identified 52 potential targets in Iran if it retaliates for the American drone strike that killed Maj. Gen. Qassim Suleimani, none of those targets qualified as cultural sites, according to an administration official who asked not to be identified correcting the president.

Nonetheless, when Mr. Trump casually said on Twitter that they included sites “very high level & important to Iran & the Iranian culture,” the resulting uproar only got his back up. Rather than simply say that cultural sites were not actually being targeted, the official said, he decided to double down the next day with reporters flying with him on Air Force One, scoffing at the idea that Iran could “kill our people” while “we’re not allowed to touch their cultural site,” saying, “It doesn’t work that way.”

The comments drew protests from Iran and other American adversaries who said they showed that Mr. Trump is the aggressor — and not just against Iran’s government but against its people, its history and its very nationhood. Even some of America’s international partners weighed in, with Prime Minister Boris Johnson of Britain breaking with Mr. Trump by issuing a statement through an aide warning against targeting antiquities.

Military leaders were left in the awkward position of trying to reaffirm their commitment to generations of war-fighting rules without angering a volatile commander in chief by contradicting him. Mr. Trump’s remarks unsettled even some of his allies, who considered them an unnecessary distraction at a time when the president should be focusing attention on Iran’s misdeeds rather than promising some of his own.

“We’re not at war with the culture of the Iranian people,” Senator Lindsey Graham, Republican of South Carolina and one of the president’s staunchest supporters in Congress, said on Monday. “We’re in a conflict with the theology, the ayatollah and his way of doing business.”

Mr. Graham, a retired military lawyer in the Air Force Reserve, said he delivered that message to Mr. Trump in a telephone call on Monday. “I think the president saying ‘we will hit you hard’ is the right message,” he said. “Cultural sites is not hitting them hard; it’s creating more problems. We’re trying to show solidarity with the Iranian people.”

Senator Jack Reed, Democrat of Rhode Island and a member of the Senate Armed Services Committee, said Mr. Trump’s threats would only encourage despots of the world to target antiquities themselves.

“America is better than that, and President Trump is flat-out wrong to threaten attacks on historic places of cultural heritage,” said Mr. Reed, a former platoon leader in the Army’s 82nd Airborne Division. “Destroying some of these culturally significant Iranian sites wouldn’t be seen as just an attack against the regime in Tehran, it could be construed as an attack on history and humanity.”

Iran, home to one of the world’s most storied ancient civilizations, has 22 cultural sites designated on the World Heritage List by UNESCO, the United Nations cultural organization, including the ruins of Persepolis, the capital of the Achaemenid Empire later conquered by Alexander the Great. Others include Tchogha Zanbil, the remnants of the holy city of the Kingdom of Elam, and a series of Persian gardens that have their roots in the times of Cyrus the Great.

The United States is a signatory to a 1954 international agreement to protect cultural property in armed conflict and has been a leader in condemning rogue nations and groups that destroy antiquities, including the Islamic State’s destruction of sites in Mosul, Iraq, and Palmyra, Syria, and the Taliban’s demolition of the famed Bamiyan Buddhas in Afghanistan in 2001.

Experts said that what Mr. Trump described would likewise violate international law. “We and others accused ISIS of war crimes when they did this,” said Jeh C. Johnson, a former secretary of homeland security under President Barack Obama who previously served as the top lawyer at the Pentagon. “Certainly, in aggravated circumstances, it should be considered a war crime.”

Mr. Johnson and others said there could be situations that are murkier, if the actual cultural value was less clear or it was being used as a military facility. Still, Mr. Johnson said, “my guess is his national security lawyers did not vet that tweet.”

Indeed, the president’s advisers ever since have sought to deny that he was actually making a threat even though his initial tweet said the sites — including those of cultural importance — “WILL BE HIT VERY FAST AND VERY HARD” if Iran responded to General Suleimani’s killing.

By Monday, the White House was again denying that Mr. Trump actually made a threat. “He didn’t say he’s targeting cultural sites,” Kellyanne Conway, the president’s counselor, told reporters. “He said that he was openly asking the question why in the world they’re allowed to maim people, put out roadside bombs, kill our people, torture our people.”