For many long weeks last summer, protesters in American cities faced off against their own police forces in what proved to be, for major law enforcement agencies across the country, a startling display of violence and disarray.

In Philadelphia, police sprayed tear gas on a crowd of mainly peaceful protesters trapped on an interstate who had nowhere to go and no way to breathe. In Chicago, officers were given arrest kits so old that the plastic handcuffs were decayed or broken. Los Angeles officers were issued highly technical foam-projectile launchers for crowd control, but many of them had only two hours of training; one of the projectiles bloodied the eye of a homeless man in a wheelchair. Nationally, at least eight people were blinded after being hit with police projectiles.

Now, months after the demonstrations that followed the killing of George Floyd by the Minneapolis police in May, the full scope of the country’s policing response is becoming clearer. More than a dozen after-action evaluations have been completed, looking at how police departments responded to the demonstrations — some of them chaotic and violent, most peaceful — that broke out in hundreds of cities between late May and the end of August.

In city after city, the reports are a damning indictment of police forces that were poorly trained, heavily militarized and stunningly unprepared for the possibility that large numbers of people would surge into the streets, moved by the graphic images of Mr. Floyd’s death under a police officer’s knee.

The mistakes transcended geography, staffing levels and financial resources. From midsize departments like the one in Indianapolis to big-city forces like New York City’s, from top commanders to officers on the beat, police officers nationwide were unprepared to calm the summer’s unrest, and their approaches consistently did the opposite. In many ways, the problems highlighted in the reports are fundamental to modern American policing, a demonstration of the aggressive tactics that had infuriated many of the protesters to begin with. 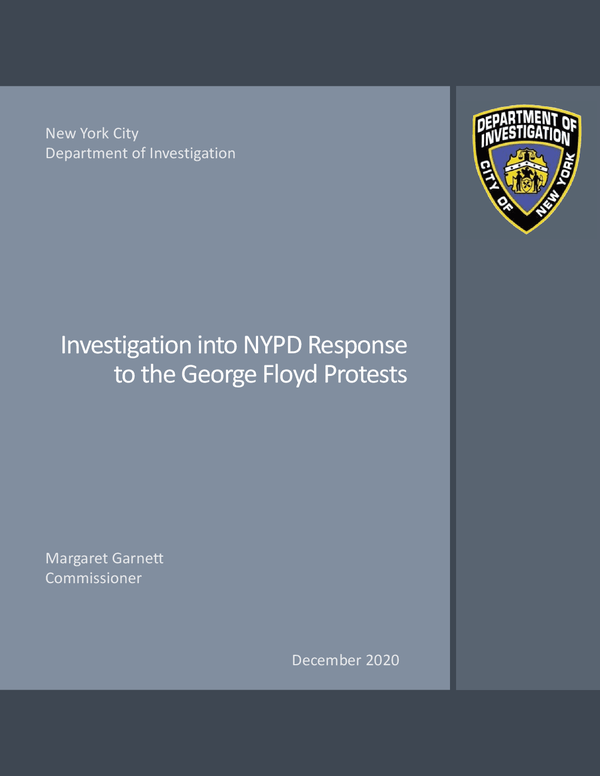 The New York Times reviewed reports by outside investigators, watchdogs and consultants analyzing the police response to protests in nine major cities, including four of the nation’s largest. The Times also reviewed after-action examinations by police departments in five other major cities. Reports in some cities, such as Oakland and Seattle, are not yet completed. In Minneapolis, the city that sparked a national reckoning over policing, the City Council only agreed last month to hire a risk-management company to analyze the city’s response to the protests, despite months of pressure.

Almost uniformly, the reports said departments need more training in how to handle large protests. They also offered a range of recommendations to improve outcomes in the future: Departments need to better work with community organizers, including enlisting activists to participate in trainings or consulting with civil rights attorneys on protest-management policies. Leaders need to develop more restrictive guidelines and better supervision of crowd control munitions, such as tear gas. Officers need more training to manage their emotions and aggressions as part of de-escalation strategies.

Those first days of protest after Mr. Floyd’s killing presented an extraordinary law enforcement challenge, experts say, one that few departments were prepared to tackle. Demonstrations were large, constant and unpredictable, often springing up organically in several neighborhoods at once. While the vast majority of protests were peaceful, in cities like New York, Philadelphia, Minneapolis and Portland, buildings were looted and fires were set, and demonstrators hurled firecrackers and Molotov cocktails at law enforcement officers. At least six people were killed; hundreds were injured; thousands were arrested.

The reports are strikingly similar, a point made by the Indianapolis review, which said that officers’ responses “were not dissimilar to what appears to have occurred in cities around the country.” Of the outside reviews, only the police department in Baltimore was credited with handling protests relatively well. The department deployed officers in ordinary uniforms and encouraged them “to calmly engage in discussion” with protesters, the report said.

Departments also were criticized for not planning for protests, despite evidence that they would be large. In Los Angeles, “the lack of adequate planning and preparation caused the Department to be reactive, rather than proactive,” inhibiting the officers’ ability to control the violence committed by small groups of people.

As with the protests in Washington, D.C., on Jan. 6 that culminated in the Capitol riot, police also did not understand how angry people were, in some cases because they lacked resources devoted to intelligence and outreach that would have put them in better touch with their communities.

“American police simply were not prepared for the challenge that they faced in terms of planning, logistics, training and police command-and-control supervision,” said Chuck Wexler, the executive director of the Police Executive Research Forum, a nonprofit that advises departments on management and tactics.

Police departments in some cities have fought back against the findings, arguing that officers were asked to confront unruly crowds who lit fires, smashed shop windows and sometimes attacked the police. Business owners, downtown residents and elected leaders demanded a strong response against protesters who were often never held accountable, the police have said.

“Heaping blame on police departments while ignoring the criminals who used protests as cover for planned and coordinated violence almost guarantees a repeat of the chaos we saw last summer,” said Patrick J. Lynch, president of the Police Benevolent Association in New York City.

On May 29, Indianapolis police showed up with helmets, face shields, reinforced vests and batons. Protesters told investigators this “made the police look militarized and ready for battle.”

At a largely peaceful Chicago protest on May 30, a demonstrator later told the inspector general’s office, the mood shifted when the police arrived. “They were dressed in riot gear,” the protester said. He added: “They had batons in their hands already.”

The reports repeatedly blamed police departments for escalating violence instead of taming it. At times, police looked as if they were on the front lines of a war. They often treated all protesters the same, instead of differentiating between peaceful protesters and violent troublemakers. In part, the reports acknowledged, that was because of the chaos. But it was also because the protests pitted demonstrators against officers, who became defensive and emotional in the face of criticism, some reports said.

In Portland, where protests continued nightly, police officers used force more than 6,000 times during six months, according to lawyers with the U.S. Department of Justice, which reviewed officers’ actions as part of a previous settlement agreement. The review found that the force sometimes deviated from policy; one officer justified firing a “less-lethal impact munition” at someone who had engaged in “furtive conversation” and then ran away.

None of these findings were new.

For decades, criminal justice experts have warned that warrior-like police tactics escalate conflict at protests instead of defusing it. Between 1967 and 1976, three federal commissions investigated protests and riots. All found that police wearing so-called “riot gear” or deploying military-style weapons and tear gas led to the same kind of violence police were supposed to prevent.

In 2015, after national protests over the killing by police of Michael Brown in Ferguson, Mo., another presidential task force said police should promote a “guardian” mind-set instead of that of a “warrior,” and avoid visible riot gear and military-style formations at protests.

U. Reneé Hall, who resigned as the chief of the Dallas Police Department in the aftermath of protests, said the recent assessments have provided a learning opportunity for departments nationwide.

“We did the same things and made a lot of the same mistakes,” Ms. Hall said.

‘To be precise takes practice’

For years, only Los Angeles police who were certified and frequently trained to use a 40-millimeter “less lethal” weapon — usually loaded with hard-foam projectiles — could use it to control crowds.

In 2017, the weapon’s use was expanded to other officers. But the new training lasted only two hours. It consisted of learning how to manipulate the weapon and firing it a few times at a stationary target. 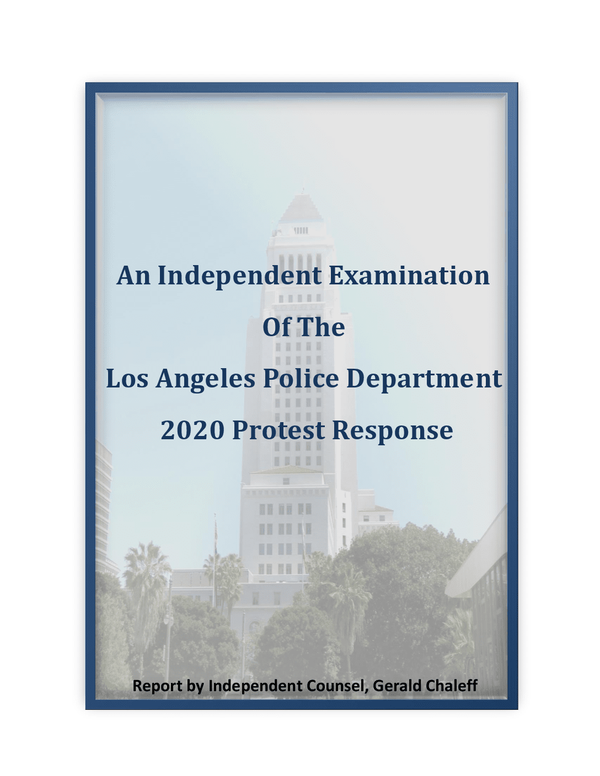 The independent report on the Los Angeles police, commissioned by the City Council, said officers who may have had insufficient training in how to use the weapons fired into dynamic crowds. “To be precise takes practice,” it said.

Multiple reports said these projectiles injured people, including the homeless man in a wheelchair.

Several reports faulted departments for failing to train officers to de-escalate conflict, control crowds and arrest large numbers of people. In Raleigh, N.C., officers said they were supposed to be trained to manage crowds annually, but those trainings were often canceled. Most Portland police officers had not received “any recent skills training in crowd management, de-escalation, procedural justice, crisis prevention, or other critical skills for preventing or minimizing the use of force,” the city’s report found.

In Chicago, investigators could not even determine the last time that officers had been trained in mass arrests, but the most recent possible time was likely before a NATO summit meeting in 2012.

No one knew who was in charge

The Chicago police response on the night of May 29, when hundreds of people marched through the streets, “was marked by poor coordination, inconsistency, and confusion,” the city’s Office of Inspector General found.

The next day, police intelligence suggested that a few hundred protesters would attend a planned demonstration; 30,000 people showed up. Senior police officials in Chicago, when interviewed after the protests ended, still did not know who was in charge of responding to the demonstrations that day. “The accounts of senior leadership on this point were sharply conflicting and profoundly confused,” the report said.

The police were supposed to have “mass arrest” kits to take large numbers of people into custody, but many kits were from 2012, the report found. 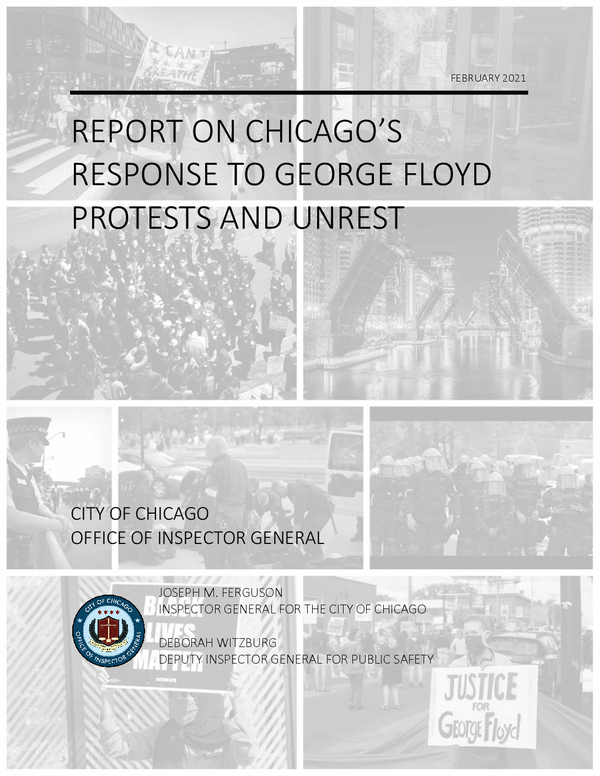 The arrest cards inside the kits were sometimes outdated; the plastic handcuffs in many kits were decayed or broken, a senior police officer later told investigators. Early on May 30, the department’s deputy chief of operations emailed another command staff member requesting 3,000 flex cuffs for the following day.

The email recipient gave no indication that the department “could not supply that number of flex cuffs, simply replying ‘[o]kay, will do,’” the report found, describing this as a signal of “a widespread, multi-faceted system failure from beginning to end.”

Chicago police also did not have enough computers to process large numbers of arrestees. In Los Angeles, police did not have enough buses to transport arrested people — a problem the department has had for a decade — and did not plan appropriately for field jails.

Senior law enforcement officers in Cleveland developed plans to manage a large protest but did not share the details with patrol supervisors. Dallas officials said the department had trouble figuring out how to get water to officers on the front lines.

The reviews did not examine protesters’ complaints of racial bias in policing. But activists in Indianapolis told reviewers they wanted an acknowledgment by the department that systemic racism exists. The Portland Police Bureau said it was planning anti-racism training for all officers.

All told, the reports suggest the likelihood of problems in the event of future protests. The trial now underway in Minneapolis of the officer facing the most serious charges in Mr. Floyd’s death, Derek Chauvin, is one potential trigger.

“What we’ve been doing needs to be acknowledged as a failure,” said Norm Stamper, a former police chief in Seattle, who said he made some of the same missteps while trying to contain the World Trade Organization protests in Seattle in 1999, when tear gas unleashed by officers triggered an escalating backlash.

Now, he looks back on that moment as one of his greatest regrets in decades in law enforcement. “We continue to make the same mistakes,” Mr. Stamper said. “We’ll be doing this time and time again in the years ahead, unless we are ready for a hard assessment.”