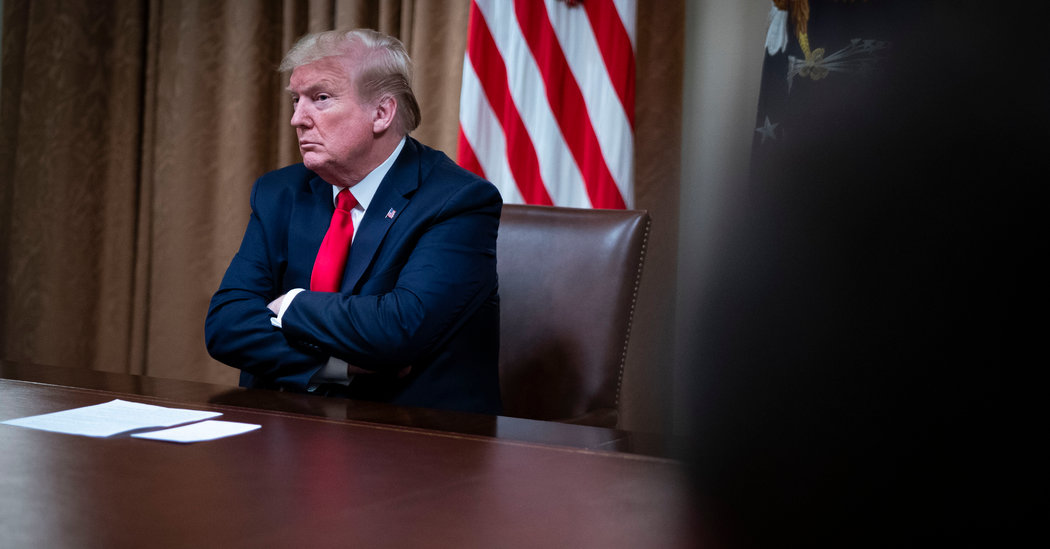 Frustrated by a faltering economy that is out of his control, and facing blowback for his suggestion that disinfectants could potentially combat the coronavirus, President Trump had sunk to one of his lowest points in recent months last week. And he directed his anger toward the one area that is most important to him: his re-election prospects.

Mr. Trump, according to multiple people familiar with the exchange, erupted during a phone call with his campaign manager, Brad Parscale, two days after he was presented with polling data from his campaign and the Republican National Committee that showed him trailing Joseph R. Biden Jr., the presumptive Democratic nominee, in several crucial states.

He lashed out at Mr. Parscale and said it was other people’s fault that there had been fluctuations in a race they had all seen as his to lose just two months ago. At one point, Mr. Trump said he would not lose to Mr. Biden, insisted the data was wrong and blamed the campaign manager for the fact that he is down in the polls, according to one of the people familiar with the conversation. Mr. Trump even made a threat to sue Mr. Parscale, mentioning the money he has made while working for the president, another person familiar with the call said, although the threat did not appear to be serious.

“I love you, too,” Mr. Parscale replied, according to the people briefed on the call.

The call was first reported by CNN.

The lack of easy options to reset his political trajectory has been deeply unsettling to Mr. Trump, who began the year confident about his re-election prospects because of a thriving economy, but whose performance on the virus has Republicans nervous about losing the White House and the Senate in November.

In the phone call last week, for instance, Mr. Trump demanded to know how it was possible that a campaign that had been projecting strength and invincibility for two years was polling behind a candidate he viewed as extremely weak and, at the moment, largely invisible from daily news coverage.

The answer, according to nearly a dozen people inside and outside the White House, lies in factors both beyond the president’s control, such as the economic downturn and the spread of the new form of coronavirus — as well as those in his control, namely, his playing down of the coronavirus over several weeks followed by his own performance at the briefing room podium.

Instead of calming the country or presenting a clear plan of action on testing, Mr. Trump has spent the majority of his time during the briefings nursing his grievances with Democrats and with members of the news media. His own advisers have pleaded with him to curtail the appearances, telling him that they hurt him more than help him.

At one particularly bad outing last week, a day before Mr. Trump screamed at Mr. Parscale, the president mused about the possibility of injecting disinfectants into people’s bodies to wipe out the virus, prompting responses ranging from outrage to mockery.

But Mr. Trump’s firm belief that the daily news conferences have been helpful to him is not backed up in the polls.

“What we’re seeing in polls is that Trump’s personal ratings have gone down even more than his job approval ratings,” said Geoff Garin, a veteran Democratic pollster. “And what that tells me is that all of Trump’s antics are taking a toll on his vote because now more than ever people see his lack of judgment and lack of temperament as being consequential.”

In an effort to buoy his spirits, some Trump advisers have flagged for him surveys that are rosier than most Republican internal polling, including a recent CNBC poll that showed him virtually tied with Mr. Biden in six battleground states, including Florida, Michigan, Pennsylvania and Wisconsin. They said they viewed that as a positive sign given how hard life has been for most Americans confined to their homes over the past month and suffering economically.

But that poll was more favorable than other recent surveys. A Quinnipiac University poll last week, for instance, showed Mr. Biden ahead in Florida, 46 to 42 percent. And a recent Fox News poll found Mr. Biden leading Mr. Trump, 49 to 41 percent, in Michigan.

The heated conversation with Mr. Parscale was not the first time Mr. Trump had expressed frustration at his top campaign adviser. But the connection between the candidate and his campaign apparatus has become more distant since the coronavirus outbreak, with Mr. Trump grounded at the White House and no longer able to reassure and re-energize himself with big rallies.

Some White House officials, like Kellyanne Conway, Mr. Trump’s counselor, have also begun to take on what would traditionally be campaign roles. Ms. Conway has been working with Marcia Lee Kelly, the president and chief executive of the Republican National Convention and a part-time adviser to the first lady, on the planning for the late August gathering.

On Tuesday, Mr. Parscale, who had not seen Mr. Trump in person in a month, flew to Washington from Florida to pay an in-person visit to the president, according to three people familiar with the meeting, and they patched up the dispute. Mr. Parscale showed Mr. Trump new campaign polling data in which the president’s standing had climbed, according to a person familiar with the visit.

The Trump campaign declined to comment, and a White House official did not respond to an email seeking comment.

Mr. Parscale, who typically meets with Mr. Trump in person to show him commercials and videos he is planning to run, has had to rely on West Wing aides to play them for the president while he listens on the phone line for reaction. With the news cycle shifting to talk about states reopening, Mr. Trump was more confident about his own chances than he had been the previous week, aides said.

Campaign advisers are carefully watching the trajectory of Mr. Trump’s standing in the polls. They insist that the numbers they are seeing now are a snapshot and not determinative about the future, and said they expected that Mr. Biden’s numbers would begin to fall when the Trump campaign begins running negative advertisements against him. They have advised Mr. Trump that Mr. Biden’s “hiding in the basement” strategy, as they call it, may be helping him now, but will ultimately backfire on him when Mr. Trump can confront him on a debate stage.

But Mr. Trump, increasingly anxious about losing the election, has also told his advisers he is worried about hitting Mr. Biden too hard too soon, fearing that they could risk knocking him out of the race altogether. Mr. Trump has continued to see himself as able to determine the outcome of the Democratic primary contest, aides said, despite all evidence to the contrary.

He has mused about Gov. Andrew M. Cuomo of New York, whose coronavirus briefings he has been intently focused on, emerging as the Democratic nominee, if Mr. Biden should somehow falter (a fantasy among a number of Republicans, and one that Democrats have made clear won’t happen).

For now, Mr. Trump’s campaign is not airing television ads, the only kind the president cares about. The president nixed a series of ads the campaign was set to air that tried to portray Mr. Biden as close to China; one adviser said this was because Mr. Trump thinks it is too early for such a tough blow.

Another adviser said the concern was more basic: Mr. Trump did not like the visuals in the ads, which featured images of Mr. Biden when he was younger. Mr. Parscale had favored those spots; other advisers to Mr. Trump, including Ms. Conway, had thought the focus right now should be on highlighting the president’s status as commander in chief.

To that end, the president is likely to start traveling again soon, even though the campaign rallies he enjoys are still off the table because of the virus crisis, something that aides hope will help improve his outlook — and his political future. One stop is expected to be Arizona and then possibly Ohio, Mr. Trump said at an event on Wednesday.

“I’ve been at the White House now for many months,” Mr. Trump said, “and I’d like to get out.”