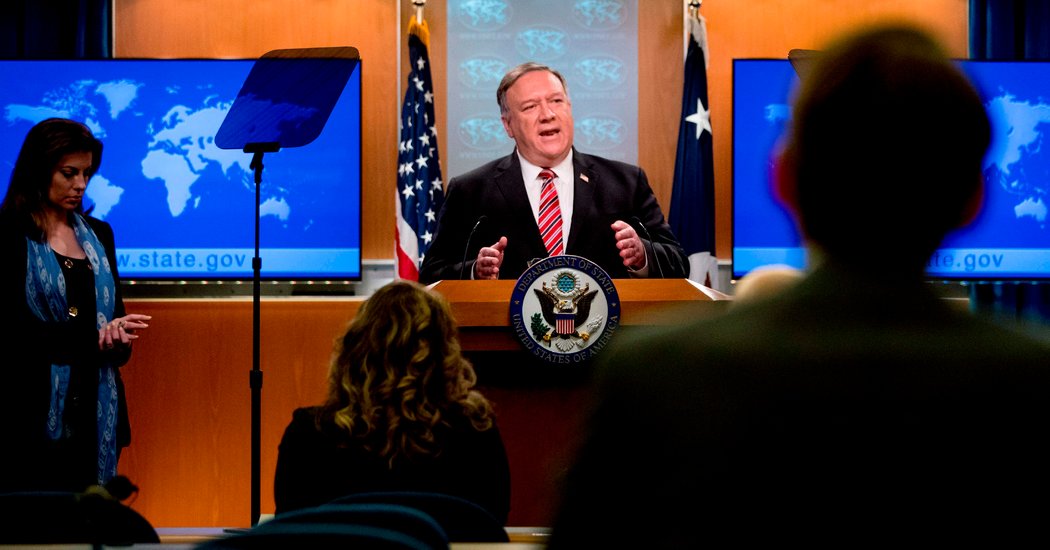 WASHINGTON — Secretary of State Mike Pompeo on Sunday backed President Trump’s assertion that the coronavirus originated in a research laboratory in Wuhan, China, though the nation’s intelligence agencies say they have reached no conclusion on the issue.

Speaking on the ABC program “This Week,” Mr. Pompeo, the former C.I.A. chief and one of the senior administration officials who is most hawkish on dealing with China, said that “there’s enormous evidence” that the coronavirus came from the lab, though he agreed with the intelligence assessment that there was no indication that the virus was man-made or genetically modified.

The theories are not mutually exclusive: Some officials who have examined the intelligence reports, which remain classified, say it is possible an animal that was infected with the coronavirus in the laboratory was destroyed, and a lab worker was accidentally infected in the process. But that is just one of many theories still being examined.

Senior American officials, including those who have looked at intelligence and who favor the lab theory, have said in private that evidence pointing to a lab accident is mainly circumstantial and based on public material. Intelligence officers have told senior administration officials that they probably will not find proof of a lab accident. And among scientists and especially virologists, there is largely agreement that the chances that a lab accident sparked the outbreak are slim, while the probability that the new virus made the leap from an animal to a human in a non-lab setting in southern China is much higher.

“We’ve seen the fact that they kicked the journalists out,” Mr. Pompeo said, referring to orders that American correspondents from The New York Times, The Washington Post and The Wall Street Journal leave China. “We saw the fact that those who were trying to report on this, medical professionals inside of China, were silenced. They shut down reporting — all the kind of things that authoritarian regimes do, the way Communist parties operate.”

Mr. Pompeo is among the small group of senior officials believed to be pushing American spy agencies to find evidence to support the theory that the government laboratory in Wuhan was the origin of the outbreak. The Chinese government has vigorously denied that the virus leaked from the laboratory, and at one point suggested that the American military created it.

The Office of the Director of National Intelligence issued a statement on Thursday saying it was continuing to “rigorously examine emerging information and intelligence” to determine whether the outbreak began with infected animals or whether “it was the result of an accident at a laboratory in Wuhan.”

The same day, Mr. Trump said he had a high degree of confidence that the laboratory was the source of the outbreak, but when pressed for evidence said, “I’m not allowed to tell you that.” In a Sunday night interview on Fox News, he promised a report on the subject, which he said would be conclusive. “I think they made a horrible mistake, and they didn’t want to admit it,” he said of China.

Some intelligence analysts are concerned that the pressure from administration officials could distort the final assessments about the virus’s origin, and that they could be used as a political weapon in an intensifying battle with China over a disease that has infected more than three million people across the globe.

If the administration continues on the path that Mr. Pompeo and Mr. Trump have blazed in recent days, they will doubtless come under increasing pressure to make available some of the evidence that led them to their conclusions. But that could prove tricky, as it did for the Bush administration when, after the invasion of Iraq, it was under pressure to make public the assessments it received that Saddam Hussein was building weapons of mass destruction. That evidence turned out to be flawed — and some of the government agencies with the most expertise on the issue wrote dissents that were ignored or overruled.

In the case of the coronavirus, declassifying the evidence about the Wuhan laboratory is more complex. Some evidence appears to be based on electronic intercepts of communications among Chinese officials, and revealing those could well expose details of how the United States keeps track of Chinese leadership. As a result, Mr. Trump and Mr. Pompeo are likely to fall back on the usual explanation that they cannot risk revealing sources and methods of intelligence collection.

They would also have to explain doubts within the government about the intelligence, which is not unusual in the case of a complex problem like decoding the origins of a virus. An April 7 meeting convened by Richard Grenell, the acting director of national intelligence, failed to gain a consensus among intelligence officials about how the outbreak occurred, suggesting that any evidence that gets released may not be conclusive.

And some American allies also seem skeptical of the Wuhan laboratory theory.

At the same time, Mr. Pompeo was correct in his assertions that Chinese government officials went to considerable lengths to cover up evidence about the outbreak and detained scientists who warned about it. They closed a laboratory in Shanghai after one of its lead scientists shared the genomic sequence of the virus with collaborators around the world. That data has been critical to medical research, including on possible vaccines, but the Chinese authorities said the laboratory had to be closed down for “rectification.”