WASHINGTON — Last week, Secretary of State Mike Pompeo was the loudest voice in the administration pushing President Trump to kill Iran’s most important general. This week, he is back in his role as the nation’s top diplomat, trying to contain the international crisis the general’s death created.

True to form, Mr. Pompeo is not backing down. “You saw, more tactically, just these last few days the president’s response when the Iranians made a bad decision to kill an American,” he told reporters at the State Department on Tuesday, referring to a deadly rocket attack in Iraq on Dec. 27 by an Iran-backed militia. “We hope they won’t make another bad decision just like that one.”

The strike against the Iranian general has affirmed Mr. Pompeo’s position as the second-most powerful official in the Trump administration, behind only the president himself. A hawk brimming with bravado and ambition, Mr. Pompeo is ostensibly the cabinet member who smooths America’s relations with the rest of the world.

But as the man at the center of the argument to launch the drone strike that killed Maj. Gen. Qassim Suleimani — and who pushed Mr. Trump to withdraw from the landmark Iran nuclear deal in 2018 — he is in the unusual role of shaping national security policy that makes his diplomatic job harder.

“Pompeo’s end run got the decision he may have wanted, but the messy day after — sloppy explanations of the threat, disorganized public statements, and hasty diplomatic and military efforts — limited the effectiveness of the policy and made it far riskier for the country and president,” said John Gans, a former chief speechwriter at the Pentagon and author of a new book on the National Security Council, which includes Mr. Pompeo.

Congress is demanding that Mr. Pompeo and other senior administration officials testify about the intelligence that led to the decision to blow up General Suleimani’s convoy on Friday as it was leaving Baghdad International Airport. 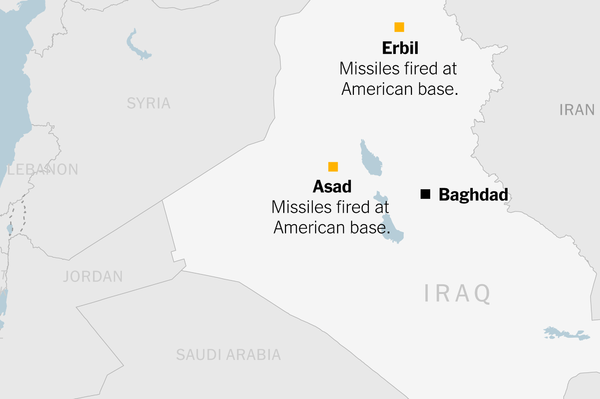 Maps: How the Confrontation Between the U.S. and Iran Escalated

Here’s how the situation developed over the last two weeks.

And as Iran begins retaliating aggressively, Mr. Pompeo, 56, could become known as the man who helped lead the United States into another conflict in the Middle East — breaking one of Mr. Trump’s key campaign promises just as the president faces re-election. Early Wednesday, Iran launched more than a dozen ballistic missiles at two bases in Iraq that house American troops, the Pentagon said.

“I think Secretary Pompeo is playing a rather naïve and destructive role in all this,” said Wendy R. Sherman, who was the third-ranking State Department official in the Obama administration and helped negotiate the 2015 nuclear agreement between Iran and other countries from which the United States withdrew just days after Mr. Pompeo arrived at the State Department.

Mr. Pompeo said he and other Americans officials “evaluated the relevant risks” that the strike against General Suleimani might bring. He cited “continuing efforts on behalf of this terrorist to build out a network of campaign activities that were going to lead potentially to the death of many more Americans.”

In the fall, during the impeachment inquiry, Mr. Pompeo’s standing plummeted among career employees at the State Department, Democrats in Congress and much of the public, when it became obvious he had enabled Mr. Trump’s shadow Ukraine policy. He also lost some of Mr. Trump’s confidence after failing to prevent veteran diplomats from testifying on Capitol Hill.

The Iran crisis presents similar risks for Mr. Pompeo, who considered running this year for an open Senate seat in Kansas. His associates say he now has an eye on a presidential campaign in 2024.

The upheaval is unfolding at a pace that Mr. Trump and top aides never expected, officials said.

Millions of Iranians have taken to the streets to protest General Suleimani’s killing — a drastic change from only weeks ago, when demonstrators were denouncing the rulers in Tehran. Ayatollah Ali Khamenei, Iran’s supreme leader, told officials that any retaliation should be direct, proportional and carried out by Iran itself.

European allies have expressed anger to Mr. Pompeo over the strike, which they were not told about in advance.

And Mr. Pompeo has been unable to convince Iraq’s government that the United States remains a reliable partner. Its parliament, furious at what Iraqi officials call a violation of their sovereignty, voted Sunday to expel more than 5,000 American troops from the country.

Diplomats and other American employees at the United States Embassy in Baghdad remain on high alert, with some heading by airplane to the safety of the American Consulate in Erbil, in Kurdish-controlled northern Iraq. The Pentagon has added 4,500 troops to some 50,000 who were already in the region, and the British Navy deployed two warships to the Persian Gulf.

American embassies around the world are warning American citizens to stay alert to potential dangers — an action that undermines the administration line that the killing of General Suleimani made Americans safer.

The security of State Department personnel abroad is a big potential political liability both for Mr. Pompeo, who played a leading role in the House Benghazi inquiry as a Republican congressman from Kansas, and for Mr. Trump.

Both men excoriated Hillary Clinton, the former secretary of state who ran for president against Mr. Trump, for the 2012 deaths of four Americans, including an ambassador, in an attack against a diplomatic compound in Benghazi, Libya. As director of the C.I.A. and then secretary of state, Mr. Pompeo has warned his subordinates that he does not want to see “any Benghazis.”

Mr. Trump and Mr. Pompeo were outraged by images of pro-Iran protesters in Baghdad on Dec. 31 attacking buildings at the United States Embassy, though no Americans were injured.

A senior administration official said a severe but unspecified threat against the embassy was the reason that Mr. Trump made the decision to kill General Suleimani.

Yet no major attack against the sprawling and heavily-fortified diplomatic compound in Baghdad’s Green Zone is “imminent,” even though Mr. Pompeo has asserted that repeatedly, said the official, who discussed administration deliberations only on the condition of anonymity. Some Pentagon officials had said earlier that there was no intelligence revealing any unusual threats.

On Tuesday, Mr. Pompeo did not repeat his assertions that the United States had intelligence about an “imminent” attack and instead pointed to recent violent episodes.

“If you’re looking for imminence, you need look no further than the days that led up to the strike that was taken against Suleimani,” Mr. Pompeo said, apparently referring to the rocket attack by an Iranian-backed militia that killed an American interpreter, Nawres Hamid, in Iraq on Dec. 27. The Americans then carried out airstrikes that killed 25 militiamen, which led to protests by mostly Iranian-backed militiamen inside the American Embassy compound in Baghdad.

American officials say that over the last two months, there have been 11 attacks by Iran-backed militias on bases in Iraq where American service members, diplomats and contractors work.

Critics say Mr. Pompeo, the only surviving member of the president’s original foreign policy team, is a chief architect of the rising tensions between the United States and Iran.

As Mr. Trump’s first C.I.A. director, he created a special center to deal with Iran, appointing as its head Michael D’Andrea, a veteran officer and convert to Islam known as the Dark Prince, who oversaw the hunt for Osama bin Laden and the drone strike campaign in the Middle East and Central Asia.

In December 2017, Mr. Pompeo said he had sent a letter to General Suleimani warning him against attacking American forces in Iraq. The general had helped plan deadly attacks on American troops in Iraq during the mid-2000s. When he received the letter, Mr. Suleimani was in Syria guiding a campaign against the Islamic State — which meant he was nominally on the same side in that fight as the Americans.

Days after becoming secretary of state in 2018, Mr. Pompeo pushed Mr. Trump to withdraw from the nuclear agreement and reimpose strict sanctions on Iran. He has nurtured closer partnerships with Israel, Saudi Arabia and the United Arab Emirates, enemies of Iran that sometimes have agendas that run counter to American interests.

In April, he advised Mr. Trump to designate as a foreign terrorist organization the Islamic Revolutionary Guards Corps, an arm of the Iranian military that includes General Suleimani’s elite Quds Force. It was the first time the United States had applied that label to a part of another government.

And after the Dec. 31 breach of the American Embassy in Baghdad, Mr. Pompeo pushed for the strike against Mr. Suleimani, which Defense Department officials had presented to Mr. Trump as an extreme and not particularly palatable option only days earlier.

Yet Mr. Pompeo’s hawkish role on Iran could increase his support in a Republican establishment that has long wanted the United States to adopt more aggressive policies toward Tehran, with some advocating leadership change against the ayatollahs.

A notable voter base — conservative supporters of Israel, including white evangelical Christians like Mr. Pompeo — promotes hard-line actions against Iran. They denounced the 2015 nuclear deal as appeasement. Last year, on a trip to Israel, Mr. Pompeo invoked the Bible in saying Mr. Trump was a modern-day Queen Esther sent by God to save the Jews from Iran.

Since Friday, Mr. Pompeo has spoken on the phone with senior officials and leaders in Europe, the Middle East and Asia to explain the United States’ need for defensive actions and, in some cases, stress that Washington wanted de-escalation. The United States also sent a message to Tehran on Friday through a Swiss diplomat, a senior administration official said.

In a joint statement issued Sunday, the leaders of Britain, France and Germany condemned Iran for its “negative role” in the Middle East but also described “an urgent need for de-escalation.”