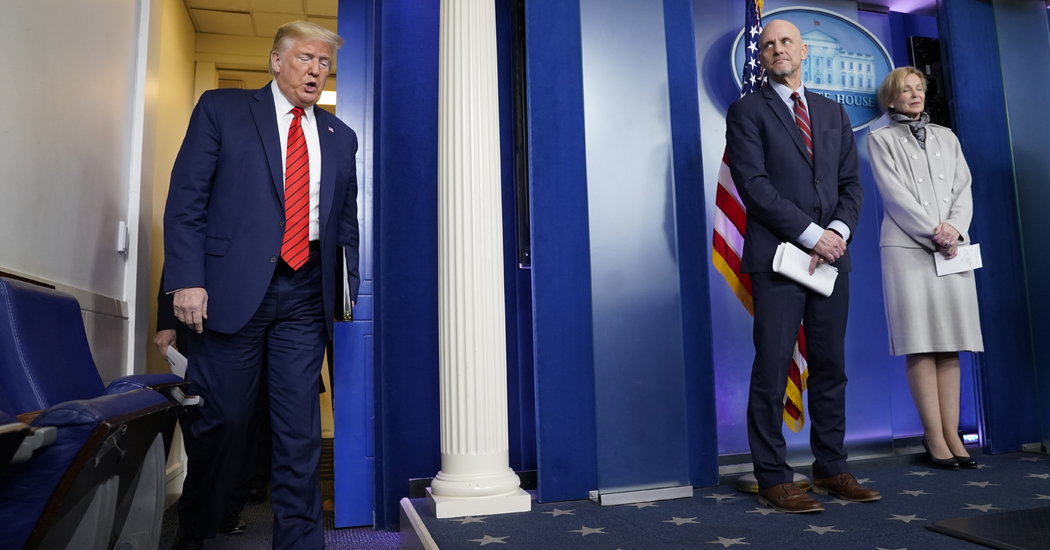 It was at a midday briefing last month that President Trump first used the White House telecast to promote two antimalarial drugs in the fight against the coronavirus.

“I think it could be something really incredible,” Mr. Trump said on March 19, noting that while more study was needed, the two drugs had shown “very, very encouraging results” in treating the virus.

By that evening, first-time prescriptions of the drugs — chloroquine and hydroxychloroquine — poured into retail pharmacies at more than 46 times the rate of the average weekday, according to an analysis of prescription data by The New York Times. And the nearly 32,000 prescriptions came from across the spectrum — rheumatologists, cardiologists, dermatologists, psychiatrists and even podiatrists, the data shows.

A Surge in Prescriptions

Previously, first-time prescriptions for chloroquine and hydroxychloroquine had been nearly the same for over a year.

While medical experts have since stepped up warnings about the drugs’ possibly dangerous side effects, they were still being prescribed at more than six times the normal rate during the second week of April, the analysis shows. All the while, Mr. Trump continued to extol their use. “It’s having some very good results, I’ll tell you,” he said in a White House briefing on April 13.

The extraordinary change in prescribing patterns reflects, at least in part, the outsize reach of the Trump megaphone, even when his pronouncements distort scientific evidence or run counter to the recommendations of experts in his own administration. It also offers the clearest evidence yet of the perils of a president willing to push unproven and potentially dangerous remedies to a public desperate for relief from the pandemic.

On Friday, the Food and Drug Administration warned against using the drugs outside a hospital setting or clinical trial because they could lead to serious heart rhythm problems in some coronavirus patients. Days earlier, the federal agency led by Dr. Anthony S. Fauci — one of Mr. Trump’s top advisers on the pandemic — issued cautionary advice on the drugs, and stated that there was no proven medication to treat the virus.

As the prescriptions surged in the second half of March, the largest volumes per capita included states hit hardest by coronavirus, like New York and New Jersey. Georgia, Arkansas and Kentucky were other states with relatively high per-capita figures. In absolute numbers, California and Washington, the earliest-hit states, were among the largest. The biggest number in either category was in Florida, where nearly one prescription was written for every thousand residents.

Carmen Catizone, executive director of the National Association of Boards of Pharmacy, said the surge created shortages that “put patients at risk who depend on these medications” to treat other illnesses.

“The fact that people reacted to what the White House said in such a way — in the 35 years I’ve been in pharmacy and pharmacy regulation, I’ve never seen that before,” he said.

More than 40,000 health care professionals were first-time prescribers of the drugs in March, according to the data, which is anonymized and based on insurance claims filed for about 300 million patients in the United States, representing approximately 90 percent of the country’s population. The data is current through April 14.

The data was compiled by IPM.ai, a subsidiary of Swoop, a company in Cambridge, Mass., that specializes in health care data and analytics based on artificial intelligence. It does not include drugs prescribed to patients in hospitals, where some doctors have administered the medication, or those released to hospitals from the Strategic National Stockpile. The data provided to The Times did not include the identities of the prescribers or the patients.

After Mr. Trump’s remarks last month, retail pharmacies across the country reported a run on the drugs, which are mostly prescribed by a small subset of medical specialists. Within days, states began issuing emergency orders to restrict the new prescriptions.

Gwendolyn Young walked into her pharmacy in Los Angeles four days after the president’s March 19 briefing, trying to pick up a 90-day prescription of hydroxychloroquine. She has taken the medication for more than 30 years to treat lupus. The drug, while approved for malaria, is also used to treat lupus and other autoimmune diseases like rheumatoid arthritis. Hundreds of thousands of patients across the United States rely on it to keep painful symptoms at bay.

At the pharmacy, Ms. Young said, she was told to start rationing her pills because the drug was being given only to patients who had Covid-19. She was eventually able to get a 14-day supply, but the uncertainty has made her anxious.

“Will I have to keep doing this every 14 days?” she said. “What happens to those people who don’t push the way I do?”

Although the availability of hydroxychloroquine has improved in recent weeks, the Food and Drug Administration still lists it as being in short supply.

Mike Donnelly, vice president of communications for the Lupus Foundation of America, said that the organization received calls and emails daily from patients who were told their prescription could be filled only in part or not at all. A spokesman for the Arthritis Foundation said some patients received their refills only after calling around to as many as a dozen pharmacies.

In the past month, about 40 states have intervened in some manner to quell the frenzy.

Idaho was the first to take a hard line, issuing a temporary rule on the same day that Mr. Trump first mentioned the drugs in his daily briefing. The rule banned pharmacists from dispensing chloroquine and hydroxychloroquine unless the prescription included a written diagnosis of a condition that the drugs had been proved to treat. The rule also limited prescriptions to a 14-day supply unless a patient had previously taken the medication.

The director of Idaho’s State Board of Pharmacy said at the time that many of the prescriptions were being written by doctors for themselves and their family members, a trend reported by other state boards as well.

Some of those writing prescriptions for themselves may have been on the front lines treating patients; the data shows an uptick among health care practitioners working in emergency medicine. More broadly, the analysis indicates a major shift in the kinds of medical practitioners writing the prescriptions, based on prescribing patterns in retail pharmacies since 2016.

Historically, the majority of chloroquine and hydroxychloroquine prescriptions have come out of a narrow band of specialties like rheumatology. That changed last month, when the specialties reflected in the data included larger numbers of those working in dermatology, ophthalmology, podiatry, urology and other areas.

Before the pandemic, most first-time prescriptions for antimalarial drugs came from within a few specialties, but in March, medical professionals across the spectrum prescribed them in record volumes.

In the past six weeks, Dr. Niran Al-Agba, a pediatrician in Silverdale, Wash., has prescribed chloroquine to a handful of adults she considered high risk for Covid-19 — among them, her 76-year-old mother, who works in her medical office.

Dr. Al-Agba said she began researching the drugs in early March after the death of a Seattle-area man, who at the time was the first known virus-related fatality in the United States. She concluded from her research that chloroquine might help, and she didn’t see any harm in writing a short prescription.

“It’s just really hard to look at your mother and not try,” she said.

Dr. Al-Agba instructed her mother to take the pills only if she spiked a fever, which she has not. She still has the pills.

For Dr. Blake Williamson, an ophthalmologist in Louisiana, it came down to writing a prescription for himself. He worries about his close contact with patients and with his 84-year-old father-in-law, who is undergoing chemotherapy for lung cancer and helps care for his three children.

He took a short, prophylactic course of hydroxychloroquine after reading studies from Europe that he thought were promising, and on advice from other physicians.

Dr. Williamson said he thought he did the right thing, especially given his continued exposure to emergency patients in an area hit hard by the pandemic.

“My goal was simply not to be an asymptomatic carrier who could harm patients or at-risk family members and not even know it,” he wrote in an email.

The interest in taking chloroquine and hydroxychloroquine as a possible treatment did not originate with Mr. Trump.

Reports from doctors in China and France that the drugs might help patients fueled interest in scientific and medical communities in the United States. Conservative media, in particular, trumpeted the drugs’ potential effectiveness, and the data shows prescriptions had already increased two and a half times over the weekday average during the week before Mr. Trump’s March 19 briefing.

Mr. Trump soon extended his interest to a combination of one of those drugs, hydroxychloroquine, with an antibiotic, azithromycin.

“HYDROXYCHLOROQUINE & AZITHROMYCIN, taken together, have a real chance to be one of the biggest game changers in the history of medicine,” he wrote in a post to Twitter around 10 a.m. on March 21, a Saturday.

The tweet coincided with a weekend flood of prescriptions for the two antimalarial drugs. By the end of the day, the prescriptions had increased 114 times at retail pharmacies compared with the average weekend day, according to The Times analysis.

On Tuesday, the National Institute of Allergy and Infectious Diseases, led by Dr. Fauci, issued guidelines against the combination of hydroxychloroquine and azithromycin except in clinical trials, with experts citing “the potential for toxicities.”

Enthusiasm for the drugs has been waning over the past couple weeks, including at Mr. Trump’s own news conferences and among researchers.

A small trial in Brazil of chloroquine was halted after coronavirus patients taking higher doses developed irregular heart rates that increased their risk of a potentially fatal heart arrhythmia. A study of 368 patients in U.S. veterans hospitals found that hydroxychloroquine was associated with an increased death rate; the drug, used with or without the antibiotic azithromycin, also did not help patients avoid the need for ventilators. (The veterans study was not a controlled trial, and neither study has been peer-reviewed.)

Mr. Trump was asked about the veterans study at his briefing on Tuesday.

“Obviously, there have been some very good reports and perhaps this one is not a good report,” he said.

By Thursday, Mr. Trump had moved on to a different subject, raising a question at his White House briefing about the use of disinfectants to kill the coronavirus inside the body. The remarks were followed by dire warnings from state health officials, who were inundated with requests for information about such a course of action. The president’s press secretary tried to make the case the comments were taken out of context by the news media, and Mr. Trump later insisted he had only been kidding.