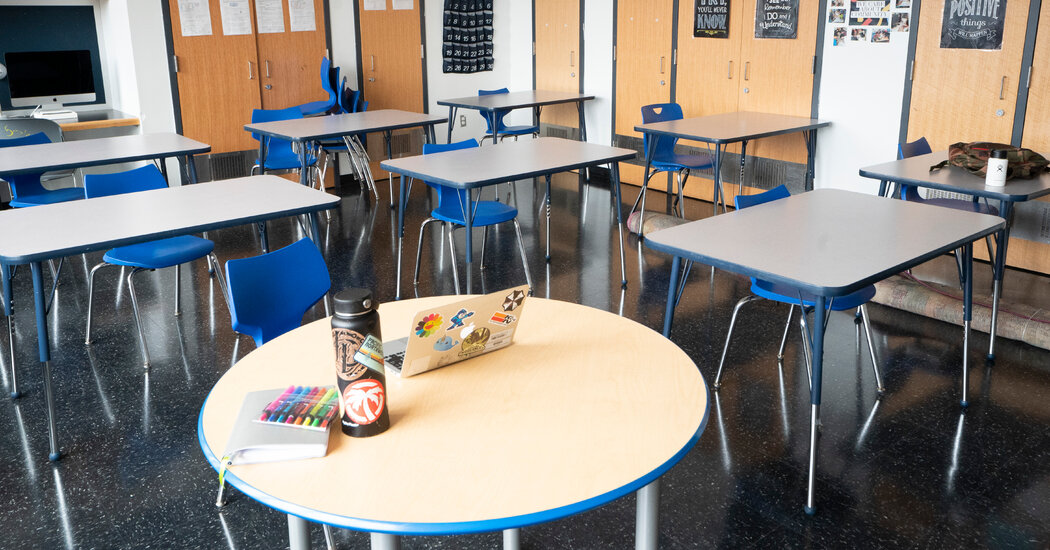 The union representing New York City’s principals said on Sunday that it had lost confidence in Mayor Bill de Blasio’s plan to reopen schools and called on the state to seize control of the school system from the mayor — a drastic move that raised new obstacles to the city’s fraught reopening effort.

The mayor has twice delayed the start of in-person classes, and the vast majority of the city’s 1.1 million students have already started the school year remotely. Hundreds of thousands of students are set to report back to classrooms this week, with elementary schoolchildren expected to start in-person classes on Tuesday, followed by middle and high school students on Thursday.

But Mark Cannizzaro, the president of the Council of School Supervisors and Administrators, said the city still does not have enough teachers to staff its schools, and that last-minute deals hammered out between the teachers’ union and the city had further undermined principals’ trust in the mayor and their confidence in the reopening plan.

Still, Mr. Cannizzaro said that principals would report to buildings as scheduled this week and were not considering a strike. “I think parents should be confident that any child that arrives at a building will be given the utmost care,” Mr. Cannizzaro said.

Thousands of principals “must now look staff, parents and children in the eye and say that they have done all they can to provide a safe and quality educational experience, but given the limited resources provided them, this is becoming increasingly difficult,” he said. The union’s executive board cast a unanimous vote of no confidence against Mr. de Blasio and the schools chancellor, Richard A. Carranza, on Sunday morning.

Miranda Barbot, a spokeswoman for the city’s Department of Education, defended the reopening effort. “For the past six months, we’ve worked with our labor partners to navigate completely uncharted waters and accomplish our shared goal of serving students this fall,” she said on Sunday. “We’ll continue this work to guarantee a safe, health and successful opening for all.”

The announcement on Sunday thrust long-simmering tensions between the city’s principals’ and teachers’ unions into the spotlight. Mr. Cannizzaro said that the principals union had not been informed about an 11th-hour agreement made between City Hall and the United Federation of Teachers on Friday that allowed more teachers to work from home if they are teaching students learning from home. The pact forced principals to again rearrange schedules during a holiday weekend.

The principals’ union has been warning for weeks of a major staffing crisis that was created by a deal made in late August between the U.F.T. and the de Blasio administration. That deal essentially mandated that schools create three groups of teachers: one to handle all-remote students, another to teach students who come to school part of the week — known as hybrid students — when they are in the classroom and a third to teach hybrid students at home. That would have required schools to double their teaching staffs — during a hiring freeze, and with mass layoffs looming.

Principals across the city have said the requirements imposed by the teachers’ union and the city were simply impossible to fulfill, and many school leaders have said they could only provide effective instruction by skirting those rules.

Alison Gendar, a spokeswoman for the U.F.T., defended the reopening plan and the union’s role.

“Since last spring, the U.F.T. has pointed out the need for additional staff if schools were to reopen safely while observing social distancing,” she said in a statement. “The current agreement is designed to staff the schools in a safe manner, and the city has committed to hiring and redeploying enough qualified educators to meet this challenge.”

Mr. de Blasio’s effort to reopen schools in New York City, which has one of the lowest virus positivity rates of any big city in America, has been plagued by political opposition and bureaucratic mismanagement. The city’s principals, who rarely wade into major political fights, have been publicly and privately raising alarms about reopening for months.

But the mayor largely brushed their concerns aside for many weeks, even as hundreds of principals said they could not fully staff their schools and that they could not answer urgent questions from their teachers, parents and students about the reopening effort.

While the teachers’ union had said earlier in the summer that schools were not ready to open because of safety issues, including outdated ventilation systems in aging school buildings and lack of school nurses, the city has been able to fulfill most of the U.F.T.’s safety demands. That union is now supportive of the city’s reopening plan.

It has become clear in recent weeks that the city was able to address those safety concerns, as daunting as they were, but was stymied by the puzzle of staffing two versions of school, one in-person and one online.

Mr. de Blasio has added thousands of educators to city schools in recent weeks, largely substitutes and educators from a pool of teachers who are still on city payroll but no longer have full-time teaching positions. But Mr. Cannizzaro estimated that the city could need over 1,000 teachers for in-person and remote classes by Tuesday, and more for when middle and high schools reopen later in the week.

If classrooms do reopen as scheduled this week, it is also still unclear how long they can stay open.

Mr. de Blasio has said the school system will automatically close if the city’s average test positivity rate reaches 3 percent. If virus clusters in parts of Brooklyn in particular continue to grow, the city could reach that threshold in only a matter of weeks, public health experts have said. For now, average positivity is hovering around 1 percent.