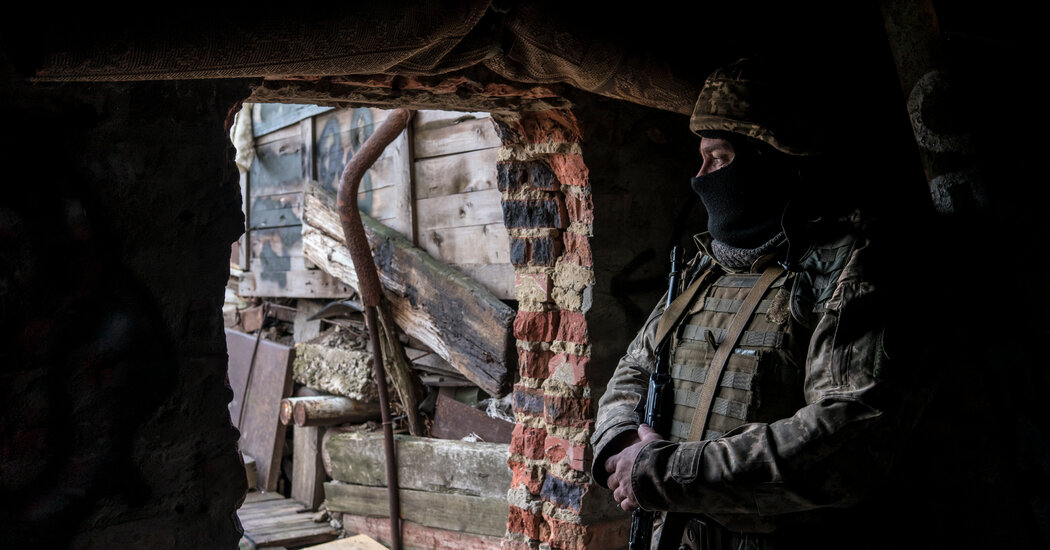 The message from the United States and the European Union has been clear: The cost of a Russian invasion of Ukraine would be very high. That price tag from sanctions as well as Russian lives lost during an invasion suggests that President Vladimir Putin should settle for some degree of diplomatic satisfaction of his demands for a secure sphere of influence. President Biden and the union have been right to seek negotiations while threatening dire repercussions if tanks begin to roll.

But European wars have broken out over lesser bluffs, and the Russian buildup along the Ukrainian border over the past month is far greater and more ominous than any saber-rattling in the past. There is no room for Western complacency here. Mr. Putin should be left with no illusions: The West would regard any further military incursion as a far greater violation of international norms than the annexation of Crimea or support for secessionists in eastern Ukraine.

The border between Russia and the West has been contested for centuries, and the amount of blood spilled across the lands of that frontier is beyond measure. There is no good reason to spill more of it in 2022.

The Russian president’s motives and calculations around Ukraine at the moment are not entirely clear. What is known from his pronouncements is that he regards Ukraine as a land with inviolable historic and cultural ties to Russia, and therefore as an intrinsic sphere of Russian influence. He has also left no doubt that he regards any Western military presence in Ukraine — or Georgia or Belarus, for that matter — and especially membership for any of them in NATO as a direct threat to Russia’s security.

These tenets are not new. Russians have been huffing over Ukraine and chafing over NATO’s expansion into Eastern Europe for years. Yet it was Russia (along with Britain and the United States) that agreed in 1994 to respect Ukrainian sovereignty in exchange for Ukraine surrendering an arsenal’s worth of nuclear weapons after the fall of the Soviet Union.

In recent months, Mr. Putin has made a point of loudly and aggressively trumpeting his views and waging a propaganda campaign depicting Ukraine as a dangerous mess. The troop buildup, along with a barrage of cyberattacks, is not the only aggressive action of late; a bill pending in the Russian legislature cites a change of the Russian border as grounds for granting citizenship.

Mr. Putin’s timing is another question. Russia’s relations with the West were relatively steady when the buildup began, with the Biden administration looking for a “stable and predictable” relationship. Mr. Putin, however, appears to have decided it was time to reassert his claim to a leading role in world affairs, with the United States in political chaos and in no mood for foreign entanglements after the chaotic withdrawal from Afghanistan, and the Europeans likewise too divided and too dependent on Russian energy to muster a serious response.

The Russian president also seems to have concluded that the president of Ukraine, Volodymyr Zelensky, had abandoned his initial efforts to build better relations with Russia and had turned entirely toward the West, actively seeking arms and NATO membership.

Mr. Putin’s concerns cannot be entirely dismissed. Were Ukraine to join NATO, the alliance would then have a 1,200-mile land border with Russia, a situation no major power would abide, no matter how loudly the Atlantic alliance claims to be purely defensive. The sale of armed drones to Ukraine by Turkey, a NATO ally — one of which was fired for the first time in October to destroy mobile artillery in the breakaway region of Donbas — has drawn acute Russian ire. Mr. Putin has also accused the West of sending warplanes on missions near Russia’s Black Sea coast.

Yet Mr. Putin’s demands for Yalta-style negotiations for a new security order in Europe are a non-starter. For one thing, the Biden administration has vowed to make no decision about Ukraine over the head of the Ukrainians, a policy summed up in the oft-heard phrase “Nothing about us without us.” That eliminates one Russian ambition — division of spheres of influence that would neutralize Ukraine without its agreement.

Mr. Biden and NATO would also not endorse any agreement that would bar a sovereign state from membership in the alliance. It is an article of faith in NATO that such decisions are up to individual nations and cannot be bartered away. Finland, for one, has declared that the option of joining NATO is key to its security, given its long border with Russia.

Step back from all of this, and it begins to look as if Russia’s real concern isn’t the placement of weapons on its borders, but the very existence of a sovereign Ukrainian democracy with the freedom to chart its own course in the world.

Still, there is room for negotiations. One constant Russian demand is that Ukraine meet its obligations under the six-year-old Minsk II agreement, a deal brokered by France and Germany that envisaged a degree of regional autonomy for rebel-held areas in eastern Ukraine in exchange for an end to Russia’s proxy war there. Minsk II was something of a victor’s deal at the time and is unpopular in Ukraine, and both sides have dragged their feet on it. But it does offer a basis on which to revive a search for a resolution of the fighting in eastern Ukraine.

There are also ways in which the United States and NATO could signal that they have no immediate intention of bringing Ukraine into the alliance or giving it advanced weaponry, while not surrendering their right to do so. Meeting Russia’s offer to hold talks on European security may not be the worst way to narrow the rift between Russia and the West.

The problem is that there is no certainty about what might persuade Mr. Putin to pull back his soldiers. He is generally regarded in Western capitals as a ruthless autocrat and nasty adversary, but also as someone who will not pick a fight he can’t win. Yet after 22 years in power, he is surrounded by sycophants who are more likely to tell him what he wants to hear than to explain a changing reality.

His talk of “historical unity” between Ukraine and Russia, for example, overlooks the fact that his brazen seizure of Crimea and proxy war in eastern Ukraine have turned many once-wavering Ukrainians against Russia, thus helping develop the very national identity whose existence Mr. Putin denies. And while there is no dispute that Russia has the military power to swiftly overwhelm Ukraine, Ukrainian regular and irregular forces would most likely fight bloody rear-guard actions with heavy Russian casualties — something ordinary Russians would not long tolerate. In the end, Mr. Putin could end up as the Russian leader who “lost” Ukraine to the West.

Isolated in his bubble of oligarchs, security chiefs and toadies, Mr. Putin is out of touch with new generations in Ukraine, Russia or other countries he regards as his sphere of influence, blithely tagging opponents and independent organizations as “foreign agents” or “terrorists” and probably believing it.

The Kremlin’s instinctive reaction to the rioting in Kazakhstan, which threatens the authoritarian rule of a Russia-friendly clique, was to blame foreign provocateurs. Yet the unrest in Kazakhstan, like Ukraine’s yearning to move closer to the West, is a distinctly homegrown rejection of the autocratic and corrupt leadership that Mr. Putin and leaders like him have practiced. That is something the old K.G.B. agent in Mr. Putin seems incapable of understanding.

Mr. Putin’s view of a declining and toothless West also does not take into account that even under the presidency of his admirer Donald Trump, the United States and its allies maintained and even toughened economic sanctions against Russia. Reports from Washington indicate that the next array of sanctions, should Russia move on Ukraine, could include a crippling ban on sales of electronic chips, among other penalties, that could sever it from the global financial system, adding to Russia’s already considerable economic woes.

These are the realities that Mr. Biden and the new chancellor of Germany, Olaf Scholz, who is seeking his own meeting with Mr. Putin, must impress on the Russian president and his lieutenants before and during the meeting of senior American and Russian officials in Geneva on Monday and subsequent meetings with NATO and the Organization for Security and Cooperation in Europe.

Mr. Putin should be made to understand that invading Ukraine isn’t worth the price, above all for Russia, raising rivalry with the United States to dangerous levels, excluding Russia for good from European security forums, alienating much of the world and bringing untold misery down on the Russian economy.