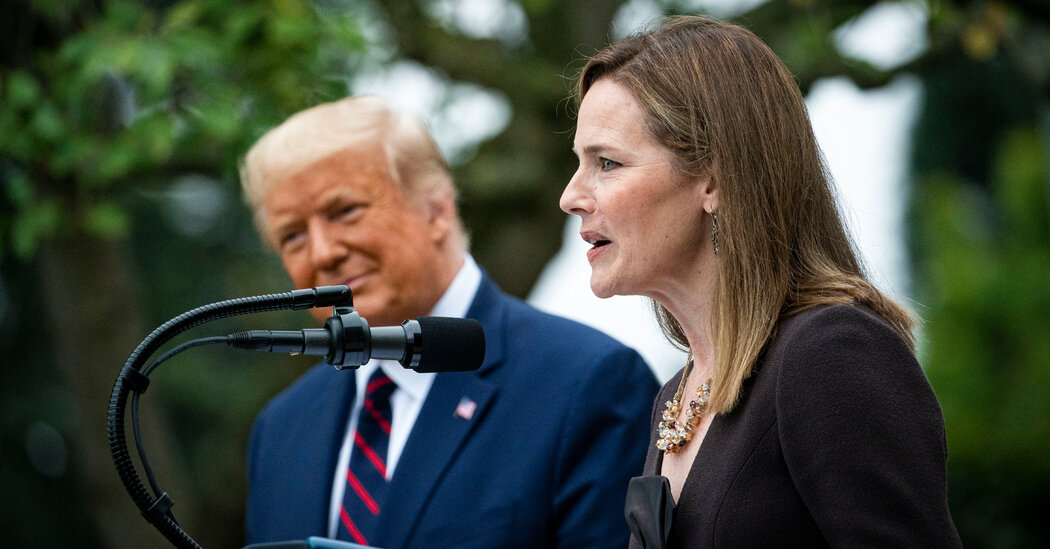 If I were a member of the Senate Judiciary Committee, here are the questions I would ask Judge Amy Coney Barrett, President Trump’s Supreme Court nominee, at her confirmation hearing scheduled to begin next week. I have grouped them into five categories.

Judge Barrett, in your remarks in the Rose Garden after the president introduced you to the public, you had this to say about Justice Antonin Scalia, whom you regarded as a mentor: “His judicial philosophy is mine, too. A judge must apply the law as written.”

You clerked for Justice Scalia 20 years ago. From the end of your clerkship until his death in 2016, was there ever a Scalia opinion with which you disagreed? If not, why not? If yes, please explain.

In those remarks, you identified yourself as a textualist, an approach championed by Justice Scalia, who maintained that the only thing that counted was the words on the page of the statute. The most prominent textualist on the Supreme Court today is Justice Neil Gorsuch, like you a Trump appointee. This past summer, he wrote the court’s majority opinion in Bostock v. Clayton County, holding that Title VII of the Civil Rights Act of 1964 protects L.G.B.T.Q. and transgender people against employment discrimination. Justice Gorsuch’s opinion turned on his interpretation of the word “sex” in the statute’s prohibition against sex discrimination in employment. Do you agree with the outcome in this case?

On the eve of your nomination, President Trump told a group of Republican state attorneys general that with disputes over the Nov. 3 election likely to end up in the Supreme Court, it was “very important” to get his nominee confirmed promptly in order to have nine justices on the bench by Election Day and thus avoid a tie vote. “I think having a 4-4 situation is not a good situation,” he said.

It’s hard to interpret the president’s words as meaning anything other than that he expects that the person who receives the favor of a Supreme Court nomination to do him a favor in return and, if necessary, break a tie on his behalf. This puts you in a very awkward position.

Obviously we don’t know what types of election cases might reach the court or what specific legal issues they might present. If your objective legal judgment leads you to support an outcome that seems to be favorable to the president, you risk being labeled by history as someone who kept her end of a dishonorable bargain. Surely, your best choice would be simply to recuse yourself from any cases growing out of the 2020 election that involve the president.

Yet although you specified in your Senate Judiciary Committee questionnaire several circumstances under which you would recuse, you have declined to say whether you would avoid participating in the kind of election cases I have just described. Please tell the committee now: Would you recuse from such cases? If not, why not?

Speaking of recusal, in 1998 you and one of your former law professors at Notre Dame, John Garvey, now the president of Catholic University, published a thoughtful and nuanced article on whether, given the Catholic Church’s opposition to the death penalty, Catholic judges who adhere conscientiously to the church’s teaching can participate in capital cases. The article concluded that recusal would sometimes be required, depending on the stage of the proceeding and the judge’s role in it.

Your own opposition to abortion and to the Supreme Court’s abortion jurisprudence is perfectly clear. In 2006, on the 33d anniversary of Roe v. Wade, you signed a two-page ad in The South Bend Tribune in Indiana declaring, “It’s time to put an end to the barbaric legacy of Roe v. Wade and restore laws that protect the lives of unborn children.” The ad was placed by the St. Joseph County Right to Life group, of which you and your husband were members.

As you know, the federal recusal statute says, “Any justice, judge, or magistrate of the United States shall disqualify himself in any proceeding in which his impartiality might reasonably be questioned.”

So my question to you is: Will you recuse yourself from abortion cases on the Supreme Court’s docket? If not, why not?

Your résumé is impressive, as the president emphasized, but if truth be told, it is quite thin for a Supreme Court nominee. You clerked, albeit on the Supreme Court; you spent the following two years as a law firm associate in Washington, D.C.; you returned to Notre Dame, your law school alma mater, to teach in 2002; and in 2017, President Trump named you to the U.S. Court of Appeals for the Seventh Circuit.

I’m hard pressed to think of a Supreme Court nominee in modern times who has brought such limited experience to the job. True, Justice Samuel Alito has spent his entire career as a lawyer for the federal government, but he had been a lawyer in the solicitor general’s office, arguing cases before the Supreme Court. He was United States attorney for the state of New Jersey and had been a judge on a federal appeals court for 15 years before he became a Supreme Court justice.

And true, Justice Stephen Breyer clerked on the Supreme Court as you did, and returned, like you, to his law school, Harvard, to teach. But along the way, he was also chief counsel to the Senate Judiciary Committee, an assistant special prosecutor in the Watergate investigation and a member of the United States Sentencing Commission. As chief judge of the U.S. Court of Appeals for the First Circuit, he was a member of the Judicial Conference of the United States, the judiciary’s policymaking body.

Justices Clarence Thomas and David Souter served only briefly on their respective federal appeals courts before being named to the Supreme Court. But Justice Thomas had worked on Capitol Hill and run a federal agency, and Justice Souter had been attorney general of New Hampshire and then a justice on that state’s Supreme Court.

You take my point. How can you reassure this committee that, in addition to your splendid academic record, you bring the depth of experience and breadth of vision that we are entitled to expect of someone ascending to this powerful life-tenured position?

In 2006, you gave the commencement address to the Notre Dame Law School graduating class. You asked the students to “keep in mind that your legal career is but a means to an end.” And you added, “that end is building the kingdom of God.”

I’m not suggesting there was anything inappropriate about giving the new graduates such a potent charge. I assume that to most of the young people who choose, as you had, to get their legal education at the University of Notre Dame, the kingdom of God means the same thing. But I’m sure I’m not the first to point out that it doesn’t mean the same thing to everyone in our great and diverse country. Your God’s kingdom may not be the kingdom of someone else’s God, if that person even has a God.

So I’m prompted to ask you a question made famous back in 1987, in the closing minutes of the Supreme Court confirmation hearing for a nominee named Robert Bork. Senator Alan Simpson, a Wyoming Republican who supported Judge Bork, tossed him the ultimate softball question. “Why,” he asked the avatar of Reagan-era judicial conservatism, “do you want to be an associate justice of the United States Supreme Court?”

“I think it would be an intellectual feast just to be there,” said Robert Bork, who was never to sit on the Supreme Court.

And so we come to my final question. Judge Barrett, why do you want to be an associate justice of the United States Supreme Court?