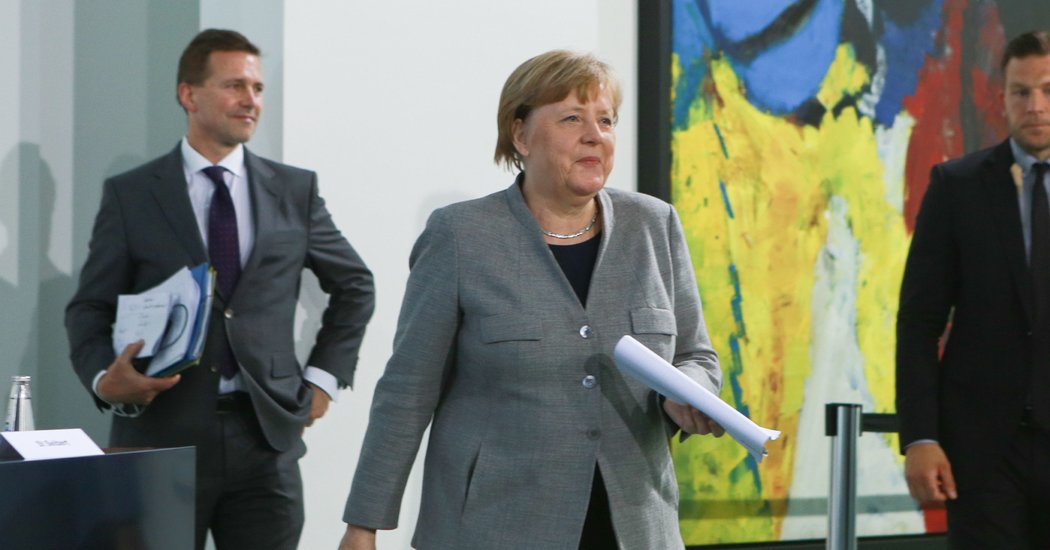 BERLIN — Chancellor Angela Merkel on Wednesday set in motion a plan for Germany to begin lifting social and economic restrictions in place because of the coronavirus, even as she warned that the road ahead would look less like a return to normal than a way to live with a pandemic that has overturned ordinary life.

The chancellor, a physicist by training, was typically restrained and focused on the science as she announced the government’s cautious step-by-step plan, for which she had won the agreement of regional leaders in Germany’s diffuse federal system.

Shorn of any bravado, her announcement seemed again to make Germany, Europe’s biggest economy, a de facto leader on the Continent and something of an example for Western nations looking to navigate the tricky course of rebooting economic activity and fighting the virus.

Her approach stood in stark contrast to the fraught political divisions in the United States, where state authorities have often been at odds with President Trump, who has made forceful but erratic predictions about the virus.

“We have achieved something,” Ms. Merkel said at a news conference, “something that by no means was a given at the start — namely that our doctors and carers, all those in the medical field, in the hospitals, were not overwhelmed.”

An economic lockdown will remain largely in place for an additional 20 days, Ms. Merkel cautioned, and strict social distancing rules will remain in force.

But some shops will be allowed to reopen beginning next week — although only those with the necessary protections in place to allow strict social distancing to continue, she said.

Older students might be allowed back to school in May but that will be contingent on a radically changed setup involving small groups, face masks and social distancing rules for school buses.

Every two weeks the government will take stock of infection numbers, Ms. Merkel said, to evaluate in real time the impact of each incremental measure that is lifted — and to avoid the danger of infections picking up pace again.

“We can’t have a wrongheaded push forward, even when the best intentions are behind it,” Ms. Merkel said. “We need to understand that we need to live with this virus as long as there is no vaccine and no treatment.”

Germany was hit hard by the pandemic but reacted quickly and decisively in trying to slow the spread of the virus.

A month ago, when the number of deaths stood at 90, Ms. Merkel’s government imposed strict social distancing rules that banned groups of more than two people of different households from gathering, and that shut down much of the economy.

By Wednesday, the number of infections in Germany stood at 136,616, the third-highest toll in Europe, after Spain and Italy. But the number of new daily infections has tapered off and the number of deaths, now at 3,428, has remained low compared with other countries.

Germany’s strategy of early and widespread testing and its large number of intensive care beds help explain the country’s relatively low mortality rate, but the trust in Ms. Merkel’s leadership and the resulting compliance with government measures has contributed too, virologists say.

As in previous stages of the pandemic, Ms. Merkel consulted widely before she made her announcement Wednesday. She had studied the recommendations from a panel of 26 top academics from a range of fields including behavioral psychology and ethics, and then hammered out an agreement with the governors of Germany’s 16 states.

Highlighting this broad consensus, the chancellor was flanked at her hourlong news conference not just by her finance minister, but also by the governor of Bavaria and the mayor of Hamburg.

“Germany has a collective philosophy, and the debates of recent days have ended up in a good result,” said Markus Söder, the Bavarian governor, who has not been shy to criticize Ms. Merkel in the past. “All states are completely united with the federal government on the strategy and the strategy is caution.”

In a week where several smaller countries in Europe have begun loosening restrictions, many had been eagerly waiting for Germany to come forward with a plan to emerge from the economic lockdown.

Ms. Merkel’s announcement came as the German government issued a bleak assessment of the impact of the coronavirus outbreak on the economy, saying the country was headed for a steep recession and a surge in joblessness.

Among the first shops allowed to reopen are bookstores, bike stores and car dealers. But they all have to ensure that the number of customers inside is limited while also avoiding long lines from forming outside.

All schools will stay closed for another three weeks and primary schools and nurseries for longer, the chancellor said. Effective immediately, the German government is also “urgently” recommending the use of face masks in enclosed public spaces like shops and public transport, but stopped short of making masks mandatory as they are in neighboring Austria.

Restaurants and bars will have to wait longer, and large events like soccer matches remain banned until Aug. 31. Religious services won’t resume until places of worship have put in place measures to ensure the required distance between worshipers.

During Wednesday’s news conference, the chancellor thanked citizens for obeying strict social distancing rules and living with so many restrictions, stressing that Germany’s relative success in combating the virus was because of their cooperation.

“The curve has become flatter,” Ms Merkel said, referring to the number of new daily infections.

But she cautioned against a false sense of security, saying the achievements could quickly be reversed.

“We don’t have much leeway,” she said.

“If we now allow more public life, in small steps, then it is very important that we can trace infections chains even better,” she said. “That must be our aim: to trace every infection chain.”

To that end, she said, Germany’s testing capacities would be increased. The country is currently capable of testing 100,000 people a day, more than any other country in Europe.

Earlier Wednesday, the European Commission presented a road map for countries in the 27-country bloc planning their own exit strategies. Chief among its recommendations is a German-style testing regime that allows for the tracing and quarantining of those who are sick while also slowly allowing those who are not to go back to some activities.

The chancellor went into detailed explanations of the science behind her own plan.

A key variable the government was looking at, she said, is the so-called reproduction factor of the virus — the number of people an infected person passes the virus on to.

That factor currently stands at about 1, she said, meaning that one person gets infected by every newly infected person. If that factor rose even to 1.1, the German health care system would reach capacity by October, she said.

If it were allowed to rise to 1.2 — so out of five infected people one infects not one but two additional people — that limit is reached by July.

“With 1.3,” Ms. Merkel continued, “we have reached the limit of our health care system by June.”

“So you can see how small our leeway is,” she said, “the entire development rests on having a number of infections that we can keep track of and trace.”