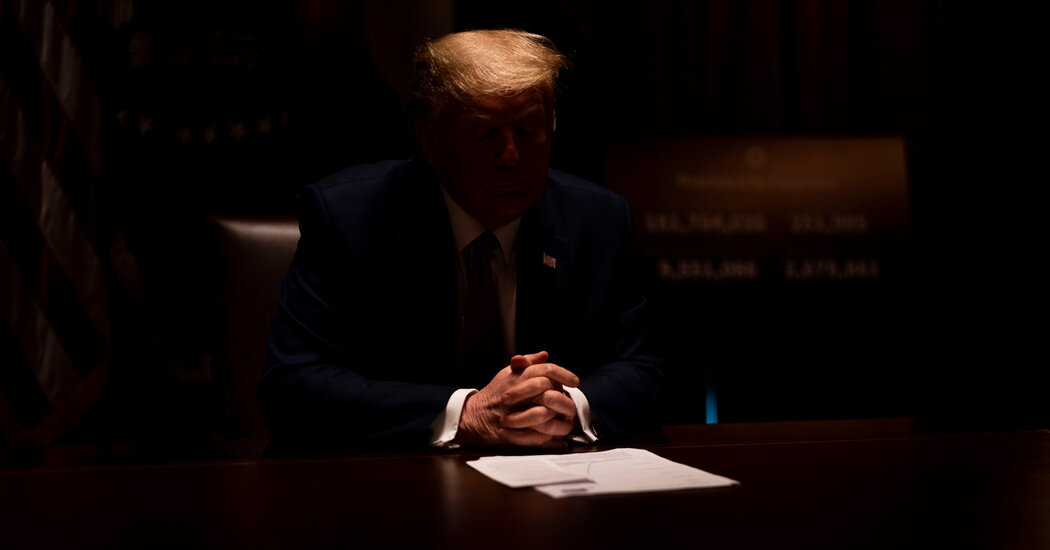 After two weeks of battling Covid-19 — thank you, dear readers, for all the good wishes — I can report that the droning discomfort has passed, some energy has returned, I can taste again, and, for better or worse, I am recovering my personality from whoever hijacked it. I can also certify that the virus is a devilish addition to life on earth. Do not mess with it.

My memory is also returning, a mixed blessing as it turns to familiar obsessions, like Trump’s ego.

You know because the president’s personality is consistent: a mix of coward, racist, liar, con artist, narcissist, grifter, and blowhard, with uncanny antennae for the worst instincts of humanity, and for how to use the media to channel insecurity and hatred into a mass political movement galvanized by his fiendish energy.

Yes, you just know with Trump. You know he insisted that Sean Spicer say his inauguration was “the largest audience to ever witness” the ceremony, and that the former senior White House counselor Kellyanne Conway used the Trump playbook when she said the statement was not false but “just alternative facts,” and that when Trump started insisting (falsely) that there had been voter fraud in the election he had won, he was laying the groundwork for real voter suppression in November 2020, and that downplaying the virus was about getting the Dow to 30,000 so he would not suffer an impossible defeat in the coming election.

Alternative facts have been the diet of Americans for 44 months now. No democracy, built on accountability and law, can survive such an onslaught indefinitely. That is why Joe Biden’s most effective slogan is a simple one: “You deserve a president who tells you the truth.”

Biden has a fight on his hands. Millions of Americans have lost their jobs. Militarized police confront angry mobs. Insecurity is rampant, as is racial tension. A plague stalks the land. These are near perfect conditions for a proto-fascist like Trump who seeks a disoriented populace.

You just know, and the knowledge is that cloying glob of sludge that can never quite be washed off in the Trump era, however hard you scrub. It permeates existence.

You know he doesn’t believe climate change is a threat, that he has done his best to eviscerate the Environmental Protection Agency, that he does not believe in science, that he thought “disinfectant” might knock out the virus “in a minute,” that he has hobbled the Centers for Disease Control and Prevention, that he couldn’t care less about transgender people, that he loathes immigrants he has described as “animals,” and that he authorized the separation of thousands of immigrant children from their parents at the border. You know that in textbook totalitarian fashion, calls a free press “the enemy of the American people.”

Yes, you know, and you also know that Trump wants you to know all this so well, and so relentlessly, that you don’t care. He has always gotten away with it. He has no reason to believe he will not continue to bat 1.000.

“The fact is, we’re here, and they’re not,” he taunted his opponents at the White House last month. It is a fact, alterable only through an immense summoning of American character and will.

You know Trump thought there were “very fine people on both sides” at the 2017 neo-Nazi Charlottesville rally, and that he thinks any Jew who votes for a Democrat shows “great disloyalty,” and that he winks daily at millions of Americans who believe he is their savior from a takeover by Black and brown people, Jewish finance, cosmopolitans, and leftist radicals. You know Trump is “very much behind” President Abdel Fattah el-Sisi of Egypt because he has yet to meet a dictator he does not dream of emulating. You know Trump must be compromised with President Vladimir Putin to the point of ignoring Russian bounties on American troops in Afghanistan.

American deaths, as this year’s virus death toll has shown, are a matter of indifference to a president who believes empathy, like patriotic sacrifice, is for suckers.

It’s important to remember that Trump believes he has done more for Black Americans than any president since Abraham Lincoln and that he claims he will preserve coverage for pre-existing conditions even as he is asking the Supreme Court to destroy Obamacare. Because Trump is delusional and a world already on the brink of an armed Chinese-American confrontation may not survive a second Trump term without disaster. Nor will the oldest democracy on earth.