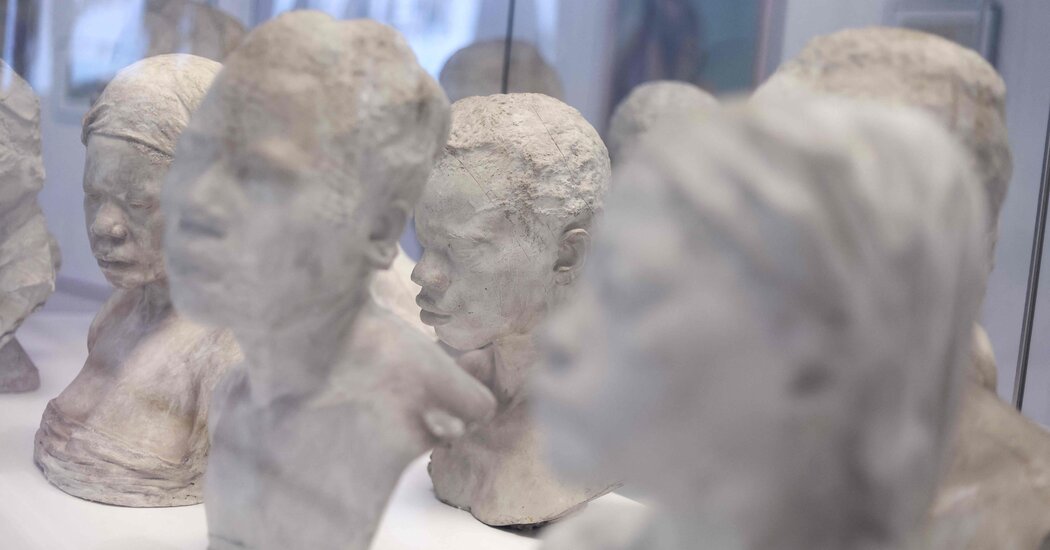 In exhibitions that were popular until the early 20th century, living people of color were displayed for the enjoyment of white audiences. The bigotry behind those shows lives on.

TERVUREN, Belgium — The Roman Catholic church at the center of Tervuren, a Brussels suburb, is no tourist spot. It’s a heavily restored building with unexceptional stained-glass windows and a little bell tower. Yet right outside its walls are seven stone graves of historical significance for Belgium as it strives to come to terms with the horrors of its colonial past.

The graves hold the remains of six Congolese men and one woman who were exhibited like zoo animals in a nearby park in Tervuren during the rainy summer of 1897 and who died of influenza and pneumonia after being forced to spend their days outside. They were among the 267 men, women and children transported to Tervuren for a colonial exhibition ordered by the Belgian king, Leopold II.

To commemorate the 125th anniversary of the tragedy that was the Tervuren exhibition, the museum that King Leopold built in that same park — which recently rebranded as the Africa Museum — has put on a show titled “Human Zoo: The Age of Colonial Exhibitions,” running through March 6. It is a meticulously documented survey of the many exhibitions of human beings that took place worldwide from the early 1800s to the mid-1900s.

Those attractions, which the museum’s curators estimate were visited by 1.5 billion people worldwide, ranged from small circus acts and “freak shows” to giant world’s fairs held in major capitals. They perpetuated theories of white superiority and racist beliefs that persist to this day.

Spectacles like the 1897 exhibition were often organized by impresarios who took troupes of unpaid or underpaid people around the world: Congolese people were shown in the United States, for instance, and Native Americans were shown in Brussels. The individuals involved were displayed behind fences and barriers, sometimes “half naked, dressed in animal skins, and performing degrading activities,” said Maarten Couttenier, one of the three curators of “Human Zoo,” on a recent tour of the exhibition.

The bigotry behind the shows lasts to this day, he added. On the morning of the interview, as Couttenier pointed out, the Belgian newspaper De Standaard ran a front-page story about a recent soccer match during which Vincent Kompany, the Black coach of one of the teams, was jeered and abused with a racist slur.

The Africa Museum’s director general, Guido Gryseels, conceded that his institution had for decades contributed to promoting racism. He said that the permanent collections were left untouched from 1956 to the early 21st century, spreading falsehoods about Africans. He recalled visiting the museum at age 4 or 5 and leaving with a negative impression of Africa. “I was scared of it,” he said. “I remembered, particularly, the wild Africans with their spears,” he added. “They were there to kill me.”

If you give “successive generations” the impression “that Africans are wild, that they’re running around naked, that they’re not civilized, you shouldn’t be surprised that these generations have problems dealing with a multicultural society,” Gryseels said.

Since taking over in 2001, Gryseels has staged multiple shows critiquing Belgian colonialism, engaged in restitution talks with African nations and hired staff of African descent. He said that the “Human Zoo” exhibition was an opportunity to “look at our past, look it right in the eyes, and come to terms with it, and realize that we as an institute, as a museum, have contributed to the problems.”

The show opens with a long wall text listing the dates of major exhibitions of men, women and children held in places including Dresden, Germany; Lyon, France; Naples, Italy; and Prague — and farther afield, in Philadelphia; San Francisco; Kyoto, Japan; and Sydney, Australia. Archive photographs offer degrading visions of humans being put on show. In one, from a “Black village” in 1900s France, a male weaver sits cross-legged at a loom as a crowd of men in top hats stare at him from behind a barrier.

There are many other photographs in the show, as well as postcards, posters depicting half-naked figures — sometimes labeled “savages” — and merchandising such as a ceramic bottle from the 1897 exhibition that depicts a Congolese woman carrying a fruit basket on her head and a baby in a pouch.

Belgium was particularly active in organizing degrading human spectacles. King Leopold — who also ruled over what is now the Democratic Republic of Congo for much of his reign, which lasted from 1865 to 1909 — enslaved the Congolese population, forcing the people there to produce rubber for his personal profit, a process in which hundreds of thousands, if not millions, were killed and maimed.

For Leopold, exhibitions were a propaganda tool to persuade Belgians of colonization’s benefits and to raise money for his ambitious plans to modernize his kingdom. Three years before the tragedy in Tervuren, the king put on a “Universal Exhibition” in the Belgian city of Antwerp and had 144 Congolese people brought over to populate a display village of 11 huts and a grotto. Photographs show them posing outside the thatched dwellings in loincloths or animal skins, holding spears or ceremonial instruments. Seven of them died in Belgium.

Nineteenth-century scientists, and the theories of racial difference that they developed and promoted, were among the driving forces behind these human parades, said Pascal Blanchard, another of the show’s curators, who put on a similar exhibition at the Quai Branly Museum in Paris in 2011.

Blanchard said it would have been “inconceivable” in the 1980s to put on an exhibition dealing with the forced display of human beings, because “people didn’t think it was a major historical subject.” It took a couple of decades of research to compile enough documentation to make the shows possible, he added.

Today, audiences in the West are eager to understand the roots of racism, Blanchard said. “If you want to deconstruct racism, and you don’t look at ‘human zoos,’ then you’re not deconstructing anything,” he added.

The exhibition ends with two sections connecting the past with the present: a contemporary art installation by the Burundi-born photographer Teddy Mazina, which pictures Africans measuring Europeans in a kind of role reversal; and a large wall display made up of sentences representing microaggressions experienced by museum staff members of African descent — illustrations of everyday racism. “I don’t see colors,” reads one; “Africa has no civilization” is another.

Marie-Reine Iyumva, an Africa Museum employee whose family came to Belgium from Rwanda, helped compile the quotations. She said that images of humans presented as though they were animals were at the root of many present-day stereotypes. “As Black women, we are compared to hyenas, described as being wild in bed,” she said. “There is a hypersexualization of our bodies.”

Crude colonialist imagery and “modern forms of ‘human zoos’” prevail to this day, said Nanette Snoep, who curated the Quai Branly Museum show with Blanchard and now leads the Rautenstrauch-Joest Museum in Cologne, Germany. In advertising, movies and stage performances, people of color are sometimes objectified and represented as curiosities, she noted.

“This idea of coloniality is still going on,” and the representations are carry-overs from colonial times, she said. “People still love exoticism.”

Such perceptions need to be dispelled, she added. “That’s why the exhibition in Tervuren is important.”