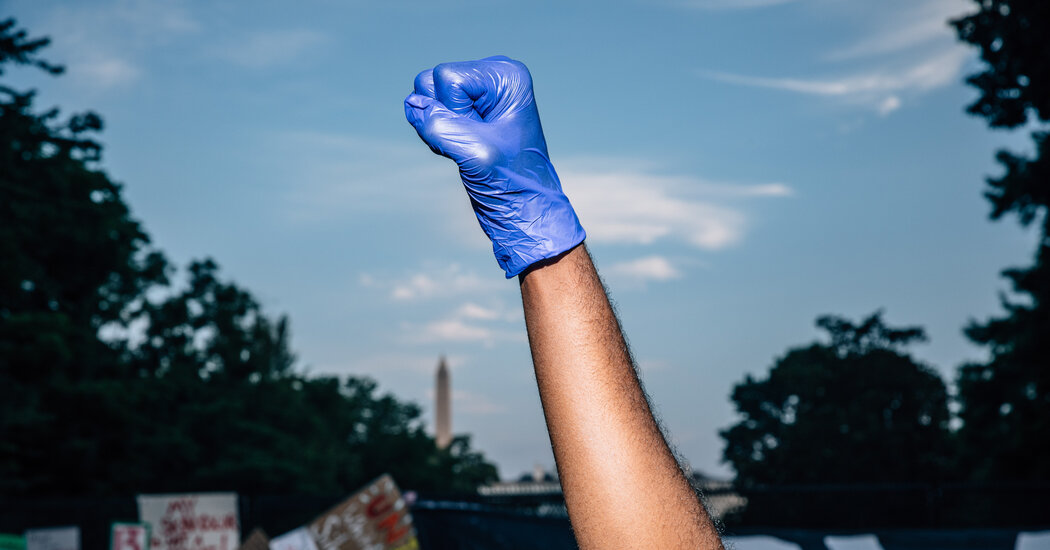 If they really wanted to help the working class, there is plenty they could do.

The Republican Party may not have much of an agenda to sell to the public right now, but it does have an enemy with which to rally its troops: “woke capital,” or those corporations that have adopted progressive rhetoric on social issues and used their platforms to support voting rights or back movements like Black Lives Matter.

“Parts of the private sector keep dabbling in behaving like a woke parallel government,” Mitch McConnell, the Senate minority leader, told reporters on Monday. “Corporations will invite serious consequences if they become a vehicle for far-left mobs to hijack our country from outside the constitutional order.”

Senator Marco Rubio of Florida wrote the commissioner of Major League Baseball to condemn the organization for moving its All-Star Game from Cobb County, Ga., to Denver in response to Georgia’s new election law. That decision, Rubio said, was “woke corporate virtue signaling.”

Some Republican critics of “woke capital” seem to understand the need to put some distance between their party and corporate America. Rubio, for example, has backed the effort to unionize an Amazon warehouse in Bessemer, Ala., as a punishment of sorts for the company’s occasionally progressive messaging. “It is no fault of Amazon’s workers if they feel the only option available to protect themselves against bad faith is to form a union,” he wrote in an op-ed for USA Today. “Today it might be workplace conditions, but tomorrow it might be a requirement that the workers embrace management’s latest ‘woke’ human resources fad.”

Senator Josh Hawley of Missouri, largely quiet since he tried to challenge the Electoral College results in January, has also pledged to take action against the “MLB & the giant woke corporations” that “keep telling Biden’s big lie about Georgia & election integrity.” Hawley said he would soon “introduce a trust busting agenda for 21st century.”

Erick Erickson, a conservative commentator and radio host, has similarly urged Republicans to take action against corporate power. “We must begin now aggressively pushing back on corporations involving themselves in public policy and advocacy,” he wrote in his personal newsletter. “The second thing we should do,” he added, “is commit to a ban on corporate welfare to attract Fortune 500 companies to red states.”

None of these things — the unionization of a single warehouse at a single firm, new antitrust legislation or an end to corporate welfare — is bad. But they are modest and would do little to curb corporate power in the aggregate. If Republicans are truly serious about standing up to “woke capital” — if this is more than just a messaging ploy meant to smooth over ideological division within the party’s ranks — then there are a few other, larger, things they can do.

For example, Republicans and conservatives could support the Protecting the Right to Organize Act. If signed into law, the act would override “right to work” laws and impose tough penalties on employers who interfered in employees’ attempts to unionize. If part of the problem of “woke capital” is that individual workers lack the power to stand up to employers who don’t share their values, then allowing workers to act and bargain collectively is necessarily part of the solution. And if you fear the overall power of “woke” corporations on American politics, then unions representing the working class are your best weapon against that influence.

Similarly, Republicans and conservatives could work to end “at will” employment, in which workers can be fired for any reason. If American corporations have been captured by activists eager to “cancel” dissenters, then workers need robust protections in the event they run afoul of an overzealous human resources department or some “woke” Walmart commissar.

A higher federal minimum wage and a more robust social safety net would also work to strengthen employees vis-à-vis their employers. The less an individual worker needs to rely on market income to survive, the more he or she can pick and choose between jobs. The more corporations have to spend on recruiting and retaining workers, the less they can spend on influencing politics.

If “woke capital” is a real problem, then it’s a labor issue as much as it is a cultural one. And there are many other policies — antitrust regulations against tech companies, “co-determination” to give workers a seat at the corporate table and strict limits on corporate political spending, to name just a few — that would curb the power of corporations to impose their values on both their employees and the broader public.

We know, of course, that Republicans aren’t interested in any of this. McConnell might denounce actual corporate speech, but he is a major recipient of corporate dollars and a staunch defender of corporate spending in elections. (He has already backed off on his comments. “I didn’t say that very artfully,” he explained the next day.) Neither Rubio nor Hawley has ever met a corporate tax cut he couldn’t support, and the entire Republican Party is united in support of an anti-labor politics that puts ordinary workers at the mercy of capital.

Recall Senator Mitt Romney’s critique of the White House’s relief package from February: “The Biden stimulus calls for checks of $400 a week in addition to state checks through September. At that level, the majority of the unemployed would make more by not working. Employers already complain that they can’t find employees.”

“Woke” capital also does not actually exist. A Black Lives Matter advertisement does not make up for the McDonald’s exploitative relationship to labor and the environment. Amazon might take a few items deemed offensive off its shelves, but it still relies on overworked and underpaid workers in its warehouses and delivery vehicles.

Capital is capital, and, culture war agitation notwithstanding, the Republican Party is more than willing to back its interests when it matters most.