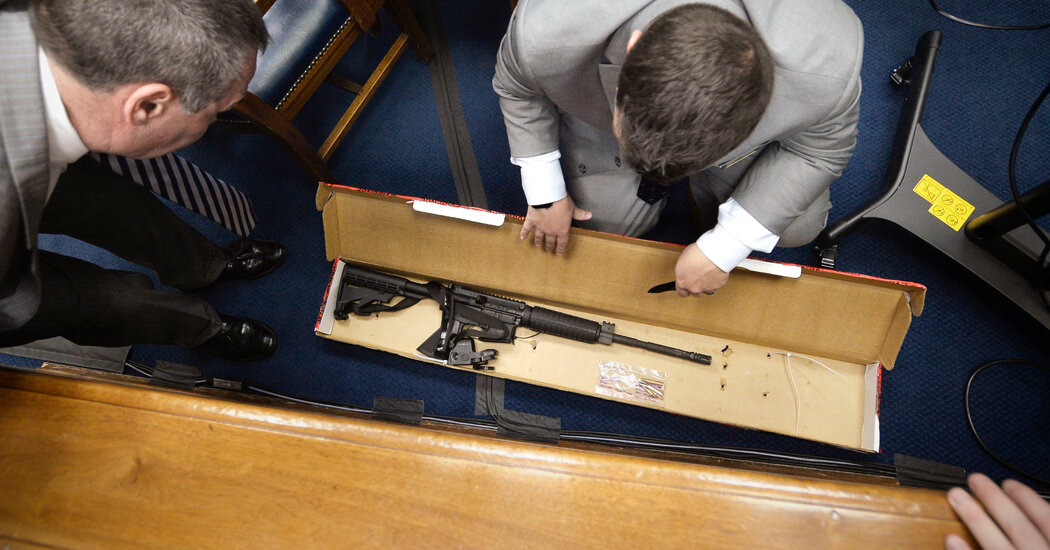 As groups debate the effect of the verdict, the legislative stalemate shows no signs of changing, and weapons on the street grow.

Four days before Kyle Rittenhouse was acquitted of murder, the judge in his case tossed out a charge: illegal possession of the military-style semiautomatic rifle he used to kill two people.

The withdrawal of the misdemeanor charge, which carried a maximum sentence of less than a year, was a footnote in a much bigger drama. Yet it was a telling reminder that the Rittenhouse case, in addition to examining the polarizing issues of race and the right to self-defense in the country, highlighted the growing proliferation of guns on America’s streets and the failure of efforts to enact even modest new gun restrictions.

While the government remains mired in stalemate on gun control, weapons purchases are at record levels: The run on ammunition has become so frenzied that gun shop owners have had to turn away hunters heading out for the winter big-game season. A spike in the firearm-related homicide rate during the pandemic has overwhelmed local police departments, and the proliferation of homemade firearms, “ghost guns,” has reached epidemic proportions in California.

Gun control advocates thought they would make some headway under President Biden but have faced a backlash.

For the advocates, there have been some gains, including a pending ban on the online sale of kit guns and $5 billion in new violence prevention funding that was included in the social spending passed by the House hours before the verdict was announced. But congressional Republicans have blocked efforts to expand federal background checks on gun purchasers and restrict the sale of semiautomatic guns, or even to confirm a permanent director for the Bureau of Alcohol, Tobacco, Firearms and Explosives.

All of that has limited the White House to adopting a series of executive actions, including new regulations on ghost guns and accessories, called stabilizing braces, that can effectively turn a pistol into short-barreled rifle; the regulatory changes are likely to provoke legal challenges. A ban on assault weapons, like the one that Mr. Rittenhouse carried, lapsed in 2004, and Republicans have blocked its renewal.

In the wake of the Rittenhouse verdict, gun control supporters face another, much more significant setback, with a conservative majority on the Supreme Court likely to strike down, or seriously weaken, a New York state law that imposes strict limits on carrying weapons outside the home.

“We are really disappointed with the outcome of the trial, and we are really worried about its implications in the case before the court, because they both deal with the same issue — whether people have the right to carry a loaded gun in public,” said T. Christian Heyne, a survivor of gun violence who is now a top official with the Brady Campaign, one of the country’s biggest gun safety organizations.

Gun laws have generally become more permissive: Open carry is now legal, to one degree or another, in many states. A majority of Americans support stricter gun laws, but a Gallup poll last year showed that support for gun regulation, which surged after a mass shooting in 2018 at Marjory Stoneman Douglas High School in Parkland, Fla., has ebbed during the coronavirus pandemic and a spike in violent crime. Other polls have showed continued strong support.

Josh Horwitz, the executive director of the Educational Fund to Stop Gun Violence, which monitors firearm-related homicides and suicides, said that “extreme gun culture” had become pervasive. “Only in America can a 17-year-old grab an assault weapon, travel across state lines, provoke a fight, kill two people and injure another and pay no consequences,” he said after the verdict on Friday in Kenosha, Wis.

Some Black Americans viewed the verdict as more evidence of racial disparity in judicial outcomes, a perspective that extended to the discussion around the right to bear arms.

The Rev. Al Sharpton contrasted the acquittal of Mr. Rittenhouse with the federal government’s aggressive, at times violent, campaign against the Black Panthers and other Black groups that cited self-defense and the Second Amendment as justifications for arming themselves.

“There’s a huge double standard,” he said in an interview, arguing that a Black man who did what Mr. Rittenhouse did “would have been convicted in two hours.”

The National Rifle Association, which has backed “stand your ground” laws to expand the legal defense for gun owners who shoot people they perceive to be threatening, responded to the verdict by posting portions of the Second Amendment on its Twitter page. “A well regulated militia shall not be infringed” it wrote, minutes after the jury delivered not-guilty verdicts on five counts facing Mr. Rittenhouse, including first-degree intentional homicide.

The Gun Owners of America, which has staked out a position to the right of the N.R.A. in hopes of capitalizing on the larger group’s recent leadership and financial woes, on Friday announced its intention to send Mr. Rittenhouse, now 18, a new AR-15 rifle in reward for his “defense” of the Second Amendment.

“Join us in saying THANK YOU to Kyle Rittenhouse for being a warrior for gun owners and self defense rights across the country!” the group wrote in a post on its Twitter page.

The legal notion of self-defense — a doctrine that has long been cherished in the United States — has been complicated by the ongoing proliferation of guns; defendants can assert that they were entitled to open fire because others could wrest their weapon from them.

During the shootings in Kenosha in August 2020, after unrest over a police shooting, many people had guns with them. One of the people Mr. Rittenhouse shot and wounded had pulled out a handgun. A police officer testified that so many armed people were roving the area that when Mr. Rittenhouse approached with his hands up, the officer made no connection to the shootings that had occurred.

In Wisconsin, a politically divided swing state, reaction to the verdict was perhaps more muted than elsewhere.

Nik Clark, president of Wisconsin Carry, a gun rights group, said the verdict would only deepen a stalemate over firearms legislation in his state. He said he did not expect that a contentious and long-stalled bill that would allow Wisconsin gun owners to carry their weapons without a special transit permit would gain new traction.

“If Kyle had been convicted, there would have been a massive chilling effect on people coming to the scenes of urban unrest, with their guns, trying to help folks protect their property,” Mr. Clark said.

“But, you know, I think there will be a chilling effect anyway,” he said. “I don’t think people want to endure the kind of thing Kyle just went through. So I think they will think twice about picking up their guns and coming when this happens again.”

Jeri Bonavia, who runs the Wisconsin Anti-Violence Effort Educational Fund, a gun control group, said the decision “was a win for the fringe” that would encourage right-wing groups to brandish their weapons at protests, leading to more bloodshed.

“The vast majority of Americans will never carry a firearm in public, but there are people who will feel emboldened now,” she said. “It’s a dangerous situation.”

Although the weapons charge against Mr. Rittenhouse was dropped, the case against his friend Dominick Black, 19, who purchased the Smith & Wesson military-style semiautomatic rifle for him at an Ace Hardware store in northern Wisconsin in May 2020, is still pending, with a court hearing scheduled next week.

Mr. Black faces two counts of intentionally giving a dangerous weapon to a person under 18 causing death, and could face up to six years in prison if convicted, though legal experts say Mr. Rittenhouse’s acquittal will greatly bolster his defense.

Yet the failure of prosecutors to secure a conviction — or even successfully pursue a weapons charge against Mr. Rittenhouse — underscored the at times confusing and inconsistently enforced state firearms regulations.

Gun owners in the state are allowed to carry weapons in public because there is simply no law restricting them from doing so, said Tom Grieve, a Milwaukee-based defense attorney and former state prosecutor who specializes in firearms cases.

There was no dispute that state law superficially bans minors, like Mr. Rittenhouse was, from owning guns.

But the fine print of state law contains a provision that exempts minors in some cases, including if their rifle’s barrel is at least 16 inches long, Mr. Grieve said. The Smith & Wesson M&P 15 that Mr. Rittenhouse had strapped around his shoulder had a 16-inch-long barrel. Mr. Grieve said he was not entirely sure how the provision got on the books, but that he believed Judge Bruce Schroeder made the correct call in the Rittenhouse trial.

In March, after several mass shootings, President Biden vowed to push for a new ban on assault weapons like the one Mr. Rittenhouse used. Mr. Biden said it “should not be a partisan issue.” But White House officials privately conceded there was virtually no chance of succeeding in a deadlocked Senate, and Democrats have not made the issue a top priority.