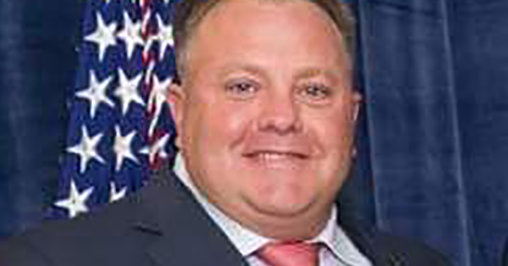 Even in an impeachment drama brimming with improbable characters, Robert F. Hyde stands out.

Mr. Hyde, an obscure Republican candidate for Congress in Connecticut, was thrust into the proceedings to remove President Trump from office on Tuesday when the House released a series of encrypted messages he exchanged last year with an associate of Rudolph W. Giuliani, Mr. Trump’s personal lawyer.

The messages suggest that Mr. Hyde had been secretly tracking the movements of Marie L. Yovanovitch, the United States ambassador to Ukraine at the time.

The conversations drew alarm from Ms. Yovanovitch, who was removed from her post on Mr. Trump’s orders, and calls from a member of Congress for an investigation. But Mr. Hyde wrote the matter off as a goof, saying on Twitter on Tuesday that he was “playing with” Mr. Giuliani’s associate, Lev Parnas.

It was only the latest in a series of erratic episodes for Mr. Hyde, a 40-year-old former landscaper with a public relations company and a congressional campaign marked by inflammatory remarks.

Last May, two months after the exchange with Mr. Parnas, the police responded to Mr. Trump’s Doral golf resort in Florida, where Mr. Hyde told officers that he feared a hit man was going to kill him, records show.

“Mr. Hyde spoke about emails he sent that may have placed his life in jeopardy,” a May 16 police report read.

It was not clear from Mr. Hyde’s messages with Mr. Parnas whether Ms. Yovanovitch was really being watched, or why.

The messages suggest Mr. Hyde had contacts in Kyiv, the Ukrainian capital, who were monitoring her. Mr. Parnas said in an interview on Wednesday that he did not participate in whatever Mr. Hyde was doing, and Mr. Giuliani said that he knew nothing about what the men had discussed.

Congressional Democrats said that some of the communications had a threatening tone.

“They are moving her tomorrow,” Mr. Hyde wrote to Mr. Parnas on March 25, just before 10 p.m. “The guys over there asked me what I would like to do and what is in it for them.”

Mr. Parnas was working with Mr. Giuliani to oust Ms. Yovanovitch, whom they considered an impediment to their efforts to improve the president’s political fortunes. Mr. Trump later ordered her removal.

The messages were included in a cache of documents that Mr. Parnas, a Florida businessman who is facing federal campaign finance charges in New York, provided to lawmakers as part of their impeachment inquiry. The materials, which had been seized by the F.B.I., were recently returned to him.

In social media posts and in text messages to reporters this week, Mr. Hyde has referred to Representative Adam B. Schiff, the chairman of the House Intelligence Committee, which released the documents, as “Adam Bull Schiff” and “liddle Adam Schitt.”

In an interview on Wednesday with Eric Bolling of the Sinclair Broadcast Group, Mr. Hyde called the messages “colorful texts” and said he was “joking around.”

“I was never a close associate of Lev Parnas,” Mr. Hyde said in the interview. “Did I like his character, and did we have a lot of laughs and joke a little bit? Of course.”

Mr. Hyde is one of four Republicans vying to challenge Representative Jahana Hayes, a first-term Democrat in Connecticut. Last month, he came under fire from members of his own party for a vulgar tweet about Senator Kamala Harris, Democrat of California, when she dropped out of the presidential race. The tweet was later deleted.

Soon after, The Hartford Courant reported that, although Mr. Hyde had made tens of thousands of dollars in political contributions, he had fallen behind on child support payments. On Wednesday, Connecticut’s Republican chairman urged him to quit the race.

Representative Eliot Engel, the House Foreign Affairs Committee chairman, on Wednesday called Mr. Hyde’s messages to Mr. Parnas “profoundly alarming” and said that members of his staff had contacted the State Department to ensure the security of the United States embassy in Kyiv and of Ms. Yovanovitch.

“This unprecedented threat to our diplomats must be thoroughly investigated and, if warranted, prosecuted to the fullest extent of the law,” Mr. Engel, a New York Democrat, said in a statement.

The State Department did not respond to requests for comment. But a Foreign Affairs Committee staff member said that the department’s Bureau of Diplomatic Security, whose agents protect diplomats and investigate certain crimes, had told the committee that it would immediately open an investigation.

In the interview on Wednesday, Mr. Parnas said that he had nothing to do with any potential surveillance of Ms. Yovanovitch, and that he doubted it had actually occurred.

Mr. Parnas said he met Mr. Hyde at the Trump Hotel Washington, where both men were frequent guests. Mr. Hyde also became a fixture at some of the same Republican fund-raising events in Washington and in Florida that Mr. Parnas attended, including the 2019 inauguration of Florida’s governor, Ron DeSantis.

Mr. Hyde, who was often spotted buying rounds of drinks for fellow supporters of Mr. Trump at the Washington hotel, gained access to the Republican events in part because he had donated $25,000 to Mr. Trump’s inaugural committee, a person briefed on the matter said. Republican fund-raising officials viewed him as a prospective donor to America First Action, a pro-Trump super PAC, although he ultimately donated only $1,000, the person said.

In recent years, according to campaign finance records, Mr. Hyde has made tens of thousands of dollars in contributions in recent years to various Republican causes, including Mr. Trump’s campaign and the campaign of Representative Greg Pence of Indiana, the brother of Vice President Mike Pence.

Mr. Hyde’s campaign website says that he served in the Marine Corps for eight years, performing security services, including in Iraq after the terrorist attacks of Sept. 11, 2001. His LinkedIn page says that he ran a landscaping and construction company near Hartford, Conn., from 2002 to 2018.

In 2011, Mr. Hyde was arrested in Avon, Conn., on a misdemeanor charge after a tree he had been hired to remove fell on a utility pole, breaking the pole in half, according to a news report that cited the police. An Avon police spokesman said the department had a record of an incident involving Mr. Hyde but he did not provide details, and the outcome of the case could not immediately be determined.

Mr. Hyde’s LinkedIn profile also describes him as a self-employed “change agent” since January 2014. In late 2018, according to his page, he started a government and public relations firm. The home page of the company, Finley Hyde & Associates — Finley is Mr. Hyde’s middle name — has pictures of him with Mr. Trump and the vice president. His campaign website also features a picture of him with Mr. Trump.

On a disclosure form filed last month in connection with his campaign, Mr. Hyde listed $30,000 in noninvestment income last year, and about $135,000 for the preceding year.

Mr. Hyde’s exchanges with Mr. Parnas last year were cryptic at times. On March 23, after exchanging some videos, articles and tweets accusing Ms. Yovanovitch of being disloyal to Mr. Trump, Mr. Hyde reported: “She under heavy protection outside Kiev.”

Two days later, he wrote, “She’s talked to three people. Her phone is off. Computer is off.” Hours later, after Mr. Parnas had picked up the exchange, Mr. Hyde wrote, apparently about his contacts, “They know she’s a political puppet.” Then, a few minutes later: “They will let me know when she’s on the move.”

“Perfect,” Mr. Parnas wrote. Mr. Hyde offered to try to learn Ms. Yovanovitch’s destination, writing, “They are willing to help if we/you would like a price … Guess you can do anything in Ukraine with money … what I was told.” Mr. Parnas responded: “Lol.”

Two months after the conversation, Mr. Hyde was at Mr. Trump’s Florida golf resort when the police got a call from a friend of his who was concerned about him, according to Rey Valdes, the Doral Police Department’s public information officer.

Besides his fears of a hit man, Mr. Hyde also claimed that the Secret Service had hacked his computer, according to a police report, which said he “continued to act paranoid” during the encounter. The police eventually took Mr. Hyde into custody “for his own protection,” Mr. Valdes said, before transferring him to a mental health facility.

This week, Mr. Hyde appeared to embrace his newfound notoriety. A stream of posts on his social media accounts included a video of himself and another man doing push-ups by a body of water as a German shepherd wandered around, a document purporting to show that he had paid his child support obligations as of Tuesday, and attacks on Democrats and the media.

“These are bad people, I’m out to expose their actions,” Mr. Hyde wrote in one post early Wednesday. “Attack me all you want, get the facts first. The media is against me because they’re either complicit or have a hand in it, I welcome an investigation. I’ll provide my email password and hand my phone over, bring it on. #hyde2020”