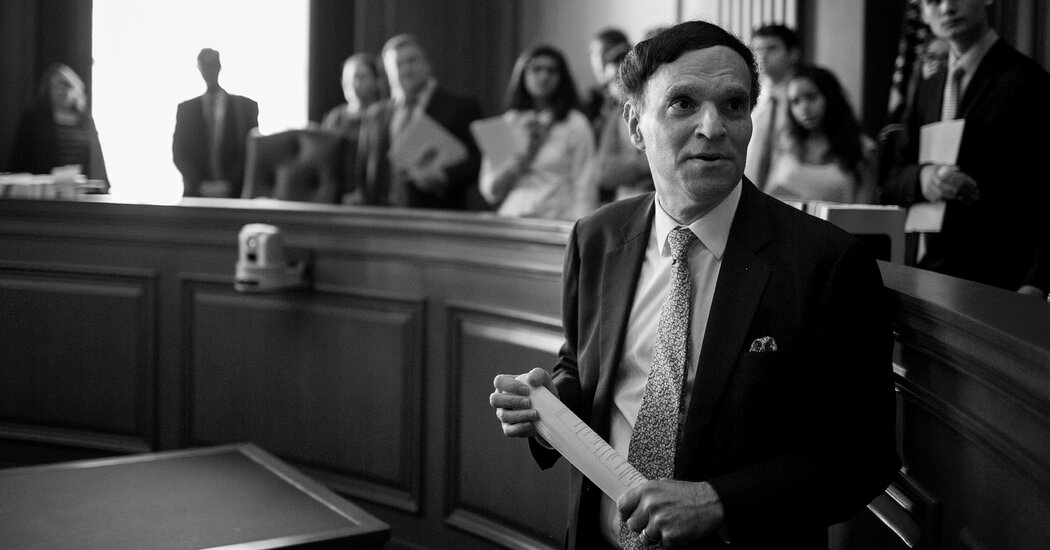 “Nothing human can be perfect,” Gouverneur Morris, the founding father, wrote in a letter to a friend in 1815. He was referring to the drafting of the Constitution, a long and contentious process in which he had played a central role three decades earlier. “Surrounded by difficulties, we did the best we could; leaving it with those who should come after us to take counsel from experience.”

The quote appears in passing in a book published a few years ago by Robert A. Katzmann, who was then chief judge of the United States Court of Appeals for the Second Circuit. The book, “Judging Statutes,” is a brief and lucid exploration of how laws get made and how judges should interpret them.

But Morris’s frank recognition of human imperfection, and of our constant striving to overcome it, is an appropriate epitaph for Judge Katzmann, who died on Wednesday at age 68. (He had stepped down as chief judge last summer but remained active as a senior judge.)

The complicated humanity of others — whether judges, litigants, citizens or lawmakers — was at the heart of Judge Katzmann’s understanding of the world. He saw it in the work of Congress, where laws that are supposed to serve as clear guideposts are often vague, ambiguous or self-contradictory, like the people who wrote them. Some jurists see all that messiness as irrelevant if not dangerous, and steer as far from it as possible. Supreme Court Justice Antonin Scalia was the leading advocate of this approach, known as textualism, and refused to consider anything that was not in the black-and-white text of the law in front of him.

Judge Katzmann, the first ever federal judge with a Ph.D. in political science, worked from a more balanced perspective. Laws are “expressions by the people’s representatives of this nation’s aspirations, its challenges, and approaches to those challenges,” he wrote. “When judges interpret the words of statutes, they are not simply performing a task. They are maintaining an unspoken covenant with the citizenry on whose trust the authority and vitality of an independent judiciary depend.”

A narrow focus on a law’s words alone, ignoring the history and context behind its writing and passage, leads a court to “divorce law from life,” Judge Katzmann wrote, quoting Justice Stephen Breyer. Judge Katzmann’s more inclusive approach is also better suited to an age in which new federal laws and regulations fill thousands of pages every year.

The expansive, generous attitude Judge Katzmann brought to his work on the bench extended to his engagement with the people whose lives and futures were affected by his rulings. As the son of a refugee from Nazi Germany, Judge Katzmann was deeply aware of how destructive it can be for citizens to feel abandoned by the law.

He noticed this particularly in immigration cases, where many litigants spoke no English and the quality of their legal representation was often shockingly poor. “I was really having trouble sleeping, thinking about what an awful situation this is,” he told me in 2018. “And then I realized there was an even more fundamental problem, and that is, most immigrants didn’t have lawyers at all. And if you don’t have a lawyer, you’re really in difficult shape.” Judge Katzmann began to study the issue and found that immigrants with lawyers had a 74 percent chance of winning their cases. Without a lawyer, that number dropped to 13 percent.

In 2014, Judge Katzmann created the Immigrant Justice Corps, a program that pairs recent law school graduates with immigrants facing legal proceedings without a lawyer. At the same time, he had begun to think about how to make the legal system more accessible, especially for those whose interactions with the law are not generally positive.

The result was Justice for All, a multimedia civic-education center based at the Second Circuit’s courthouse in Lower Manhattan. Since 2018, groups of high school students, many of them racial minorities, have been visiting the center to learn how to do basic legal research online, take part in moot courts and meet with judges, all with an eye toward combating the widespread public ignorance about American government and its legal system. “How can we expect the public to support the judiciary and the Constitution and the rule of law when they know so little about it?” Judge Katzmann once asked me.

He was interested not only in educating students about legal power but in setting them up to one day share it. “When I’ve done moot courts, I take the students back to the robing room and I say, ‘Put on the robe,’” he told me after meeting with one group of students. “And these are often kids of color. I say, ‘This could be your future.’ And you really can see in their faces, oh yes, this could be their future.”

Judge Katzmann’s gentle humility was disarming and widely remarked on, perhaps because of its relative rarity in the hard-charging, self-assured culture of the legal world, not to mention most of American political life these days.

In one conversation in his chambers, he told me how proud he was of the judicial commitment to nonpartisanship. “That’s one of the great things about the judiciary. We come from all different kinds of backgrounds, but we’re playing off the same score. Musicians are part of an orchestra; there’s a common language. Were judges to become involved in partisan disputes, we would devalue the institution we serve, and we are very careful to avoid that kind of language and rhetoric.”

As someone who writes about the courts on a regular basis, I found myself skeptical of Judge Katzmann’s faith in an independent judiciary. But he meant it. In our last phone call, he pointed with pride to his 2018 decision for the full Second Circuit in the case of Zarda v. Altitude Express, Inc. — in which the court ruled that Title VII of the Civil Rights Act prohibits employment discrimination on the basis of sexual orientation. The Supreme Court upheld that decision in a landmark ruling last June. That gratified Judge Katzmann, but perhaps no more so than the manner in which he had won over his colleagues with his own opinion two years earlier. “The vote in that case was 10-3. And in the 10 votes, you have the support of judges who were appointed by Republican presidents. If you look at the dissent, the three, the dissent was written by someone appointed by a Democratic president,” he told me.

Then he admitted to some trepidation. “A concern that I do have is that there may be a perception out there that courts are just political actors and that what they do is just serve their political sponsors. And I don’t think that that is healthy,” he said. “Because I also don’t think it’s correct.”

If Robert Katzmann’s vision of the judiciary is to be a reality, it will require more judges like him.