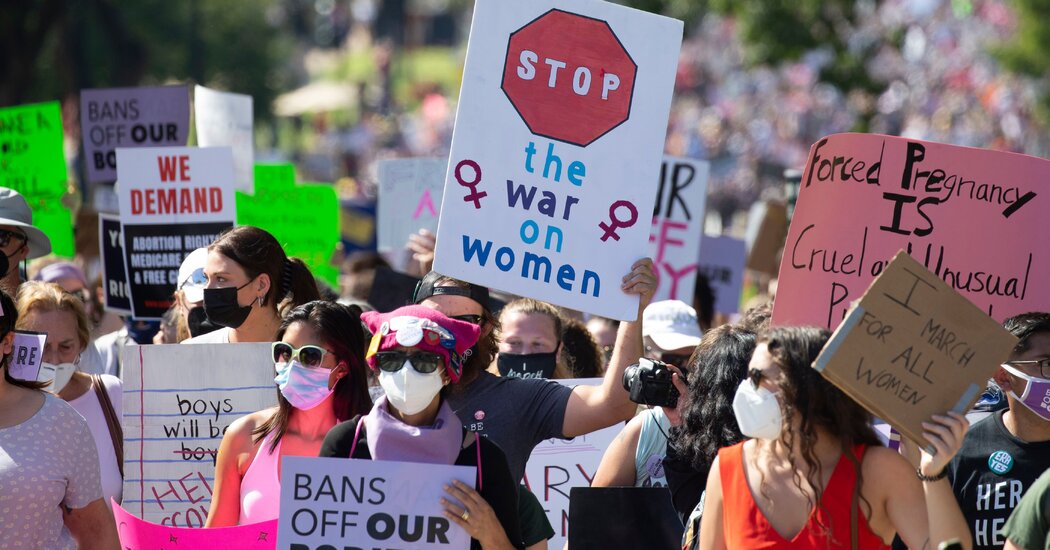 For the first time in a generation, the Supreme Court appears likely to overturn Roe v. Wade. The end of Roe need not herald the end of an era of reproductive freedom. It may instead launch a new strategy that protects the fundamental human right to decide whether to have children and raise them in safety and dignity.

The Supreme Court will hear oral arguments on Monday in two separate cases challenging the new Texas law effectively banning abortion. The more direct nationwide threat to Roe, however, comes in December in a case challenging a Mississippi law that would ban most abortions after 15 weeks.

To fully grasp what is at stake now, it’s worth looking back. In 1992, one of us, Ms. Kolbert, argued on behalf of Pennsylvania abortion providers in Planned Parenthood v. Casey, which challenged abortion restrictions including a waiting period requirement, biased mandatory counseling, parental and spousal notification requirements and other obstacles to care. At the time many court watchers believed Roe was doomed. Justice Clarence Thomas had just joined the court, and at least four other justices appeared likely to vote to overturn the ruling.

More than two decades later, Justice John Paul Stevens’s memoir confirmed how close supporters of abortion rights were to losing Roe: Following the oral argument seven justices agreed that most of the onerous Pennsylvania abortion restrictions should be upheld. Justice Stevens wrote that he and Justice Harry Blackmun “assumed that the result would be explained in an opinion overruling Roe v. Wade.” Indeed, Chief Justice William Rehnquist then “circulated a draft opinion for the court on May 27, 1992, that met our expectation,” Justice Stevens wrote. The drafted opinion did not explicitly overrule Roe, but it “effectively repudiated its central holding.”

Thankfully, at the 11th hour, Justice Anthony Kennedy had a change of heart. He quietly worked with Justices David Souter and Sandra Day O’Connor to draft a joint opinion reaffirming Roe’s holding that a woman has the right to choose abortion until viability (usually at 24 to 28 weeks of pregnancy) and thereafter if necessary to protect her life or health. But the court reduced the high level of constitutional protection that Roe afforded, permitting states to impose restrictions on abortion so long as they do not constitute an “undue burden.” The court upheld most of the Pennsylvania restrictions, but fortunately, struck a provision requiring spousal notification.

In recent years, the courts have upheld more barriers to care under the Casey standard, effectively placing abortion out of reach for many women, particularly teenagers, those living in rural areas and low-income women — limitations that are disproportionately experienced by women of color.

Still, Casey supported legal abortion in all 50 states. Today, the votes are likely no longer there to save even this diminished version of Roe. The new ultraconservative-dominated Supreme Court is poised to give states the unfettered ability to ban most abortions.

In the cases on Monday, the Supreme Court will address whether the Justice Department and abortion providers have the ability to challenge the Texas law in federal court.

The more significant case, Dobbs v. Jackson Women’s Health Organization, will be argued on Dec. 1. Dobbs, with its ban on most abortions even well before the point of fetal viability, poses the central question of whether Roe v. Wade and Planned Parenthood v. Casey remain the law of the land.

Five justices — Brett Kavanaugh, Amy Coney Barrett, Neil Gorsuch, Clarence Thomas and Samuel Alito —  are expected to eviscerate abortion access with their decision in Dobbs. None of these extremely conservative justices are likely to join a last-minute reprieve as happened in Casey.

When Roe falls, 26 states are likely or certain to ban abortion. Just 14 states and the District of Columbia will reliably continue permitting abortion, safeguarding women’s liberty.

“Save Roe” has been the rallying cry of abortion-rights groups for nearly 50 years. But we need to stop banging our heads against the Supreme Court’s marble walls. While the situation is dire, we do have the potential today to realign American politics and develop a new strategy that not only preserves but expands reproductive freedoms.

First, we must think and talk about this issue differently. While our opponents talk about protecting religious beliefs or the “pre-born,” we must highlight the rights of women themselves, and point out that enabling them to choose whether, when and with whom they have children is central to gender equality and essential to the ability to control one’s own life.

Such fundamental reproductive freedoms require more than just access to abortion. Rather, they require access to basic services that empower all families to have and raise their children when and how it is best for them, including affordable birth control and child care, equitable health care and an end to L.G.B.T.Q. discrimination. We need a framework for recognizing basic human rights that goes well beyond the privacy rights that Roe rests upon and aligns with the goals that women of color have pursued for decades through the reproductive justice movement.

All of this requires political power, and that means getting active in electoral politics. The right has used abortion as a wedge issue for over 40 years; we must likewise vote as if our lives depend on it in every election, not just once every four years. Reproductive rights supporters must insist that all elected officials — from school board members to state legislators to members of Congress — be champions for the cause.

We also need to make noise. We need to organize protests and boycotts well before state laws like the one in Texas come to a vote, let alone make it to the Supreme Court. Eight years ago, a Texas state senator, Wendy Davis, conducted an 11-hour filibuster that briefly stopped an anti-abortion law and started a run on pink sneakers. Creative, newsworthy resistance builds public awareness and support, rallying voter support from the Capitol steps to social media influencers. Those voting for abortion restrictions should pay a political price for doing so.

At the same time, we must help all who need critical reproductive health care services. The pandemic has exposed and worsened economic and racial inequities in getting health care. We must raise money for abortion funds to fill the gap for patients forced to travel. In states where abortion remains available, we must push for broad access to medication abortion by expanding telemedicine and encouraging student health services and urgent care centers to provide these essential services.

The cases before the Supreme Court this fall are cause for alarm. Let’s make them a rallying cry for demanding reproductive freedom as a fundamental human right — and not just a privilege dependent on your race, where you live, whom you sleep with or how you define your identity.

Have you or a partner had, or considered having, an abortion?

Opinion would like to hear you tell your story for a future project. Leave us a voice message at (405) 804-1422 using the questions below as prompts‬. Please include your name, age, where you live and the best way for us to contact you (email or phone number) if we decide to publish your message.

How did your choice to have — or not to have — an abortion change you, or change your life? How did it affect others in your life, if at all?

How did you come to your decision?

What challenges did you face, if any, getting access to abortion services?

How did your decision affect how you feel about reproductive rights?

Kathryn Kolbert and Julie F. Kay are co-authors of “Controlling Women: What We Must Do Now to Save Reproductive Freedom.” Ms. Kolbert co-founded the Center for Reproductive Rights and argued Planned Parenthood v. Casey in 1992. Ms. Kay is a human rights attorney who has argued for abortion rights internationally, including before the European Court of Human Rights in the case of A, B and C v. Ireland, which spurred liberalization of Ireland’s abortion law.