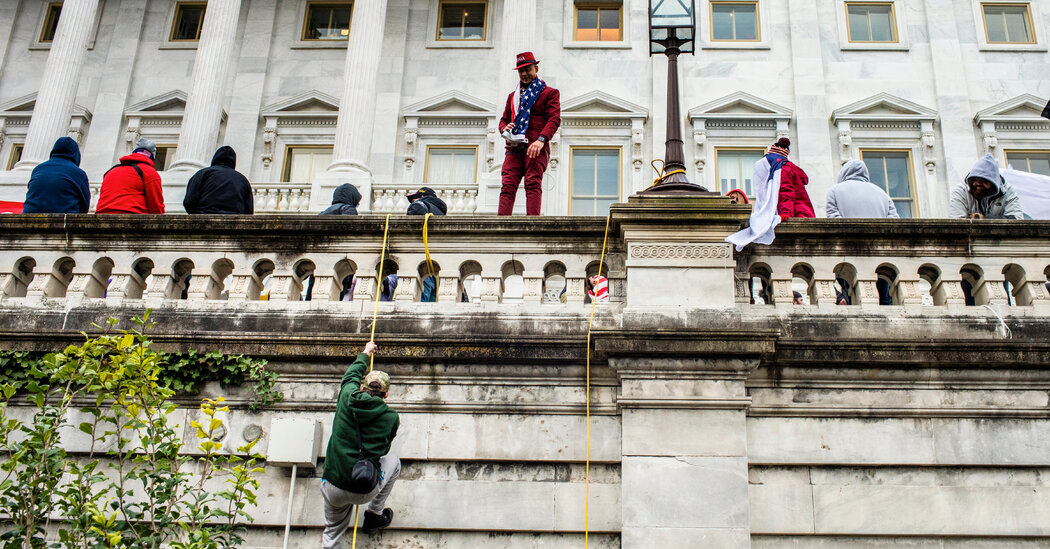 The sentence given to Scott Fairlamb, a former New Jersey gym owner, is the most severe so far for any of the more 650 people charged in the Jan. 6 attack.

A former New Jersey gym owner who was the first person to plead guilty to assaulting a police officer during the attack on the Capitol in January was sentenced on Wednesday to 41 months in prison, the most severe punishment given so far to any of the more than 650 people charged in the riot.

The gym owner, Scott Fairlamb, admitted in August to breaking into the Capitol and then after he left, approaching a group of officers outside as they were making their way through a large and angry group of pro-Trump protesters.

A hulking, bearded man who once competed as a mixed martial artist, Mr. Fairlamb could be heard on video shouting at the officers: “Are you an American? Act like it!” Then, unprompted, Mr. Fairlamb shoved one of them and punched him in the face.

At a hearing in Federal District Court in Washington, Mr. Fairlamb apologized in halting tones to his family, saying he had tarnished the name that “they had built up” with his “completely reckless” actions. His father once worked for the New Jersey State Police and his brother is a Secret Service agent who was formerly assigned to Michelle Obama.

“That was not Scott Fairlamb,” he said of his behavior on Jan. 6. “That’s not who I was raised to be.”

But Judge Royce C. Lamberth called Mr. Fairlamb’s assault on the officer “an affront to society and the law,” adding that he needed to serve time in prison even though he had shown remorse for the attack.

“The offense itself that you committed is at the heart of our democracy,” Judge Lamberth said.

Mr. Fairlamb’s sentence was slightly lower than the 44 months in prison that prosecutors had requested and could set a benchmark for dozens of other defendants charged with assaulting police officers on Jan. 6. Judge Lamberth said he would get credit for the 10 months he had already spent in custody after being denied bail.

The authorities have said that, according to a review of cameras worn by the police, there were over 1,000 attacks on federal officers that day. More than 200 people have been charged with assaulting, resisting or interfering with officers, but aside from Mr. Fairlamb, only five of them have pleaded guilty.

At the hearing, prosecutors read a statement from Mr. Fairlamb’s victim, who has been identified as Officer Z.B. In the statement, the officer said he still recalled the “dread and fear” of being attacked, alone, outside the Capitol on Jan. 6, calling it “the scariest day” of his career.

In court papers filed last week, prosecutors noted that Mr. Fairlamb’s menacing behavior continued after Jan. 6. Two days later, they said, he took a video of himself threatening further violence and saying, “They pulled the pin on the grenade and the blackout is coming.”

Then, after F.B.I. agents sought to interview him, prosecutors said, he wrote on social media that he would go to the Capitol again.

In his own court papers, Mr. Fairlamb’s lawyer, Harley Breite, wrote that his client had expressed “remorse” and “tremendous shame” in September when he sat down to discuss his case with prosecutors and investigators. In online posts both before and after Jan. 6, Mr. Fairlamb seemed to echo many aspects of the QAnon conspiracy theory and voiced concerns that a civil war was coming. But according to Mr. Breite, he has since come to believe that he was “duped by social media.”

While new arrests continue almost daily and show no sign of ending, the vast prosecution of the Capitol attack has started to shift toward the process of entering guilty pleas and meting out sentences. At this point, slightly more than 30 people have been sentenced — a majority for low-level crimes like disorderly conduct and illegally parading in the Capitol. Most have avoided jail time altogether, receiving penalties of home confinement or probation.

Before Mr. Fairlamb was sentenced, the stiffest punishment given to a Jan. 6 defendant was the eight-month jail term handed down in July to a Florida man, Paul Hodgkins, who breached the Senate floor with a pro-Trump banner.

On Tuesday night, prosecutors filed court papers recommending their most severe sentence yet — four years and three months in prison — for Jacob Chansley, the so-called QAnon Shaman, who pleaded guilty in September to obstructing the business of Congress by storming the Capitol shirtless, in a horned fur hat and carrying an American flag attached to a spear.

The question of how severely to punish those involved in the attack has prompted a kind of a philosophical debate among judges on the federal bench in Washington. One judge, Tanya S. Chutkan, an Obama appointee, has more than once handed out a harsher sentence than the one requested by the government, often accompanying her decisions with the statement, “There must be consequences.”

Another judge, Trevor N. McFadden, appointed by President Donald J. Trump, has questioned whether low-level defendants should serve any time in jail.

Washington’s chief federal judge, Beryl A. Howell, criticized the Justice Department’s “almost schizophrenic” approach to sentencing at a hearing last month, noting that prosecutors had consistently described the events of Jan. 6 in disturbingly extreme terms and yet allowed scores of defendants to plead guilty to what amount to petty offenses.

This “muddled approach by the government,” Judge Howell complained, was not only confusing, but also tied her hands in issuing tough sentences.