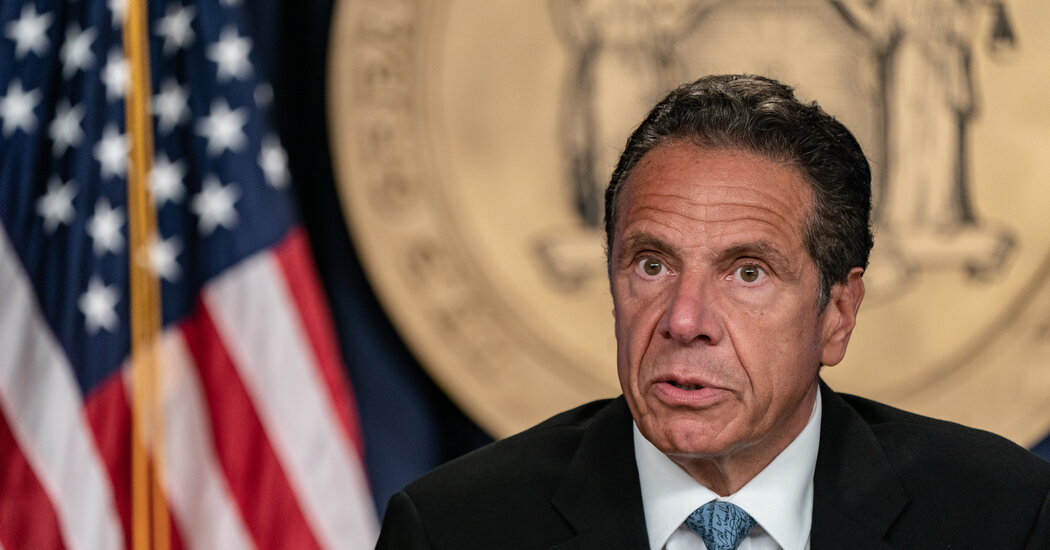 Allegations that two women made against the former governor were credible, the Westchester County district attorney said, but she said that his conduct was not criminal.

Miriam E. Rocah, the Westchester County district attorney, said on Tuesday that her office had investigated accusations of unwanted kisses that two women — one a state trooper — made against Mr. Cuomo. The women said the episodes had occurred within her jurisdiction.

The women’s allegations were “credible” and Mr. Cuomo’s conduct was “concerning,” but his conduct was not criminal under state law, Ms. Rocah said in a statement.

The announcement came five days after Joyce Smith, the acting district attorney in Nassau County, on Long Island, reached a similar conclusion after investigating a separate allegation made by the trooper involving an incident at Belmont Park racetrack in Elmont, N.Y.

Ms. Smith said that her inquiry had found the accusation “credible, deeply troubling, but not criminal under New York law.”

A spokesman for Mr. Cuomo declined to comment. The former governor has repeatedly denied acting inappropriately with women, and he has insisted that the actions that gave rise to the sexual harassment allegations against him were misinterpreted.

In August, Letitia James, New York’s attorney general, released a report that detailed 11 women’s sexual misconduct allegations against Mr. Cuomo. Some of Mr. Cuomo’s accusers were state employees, including the trooper, who was a member of his security detail. Mr. Cuomo, a third-term Democrat, resigned shortly after the report was issued.

The trooper, who has not been publicly identified, told investigators that Mr. Cuomo had asked her in 2019 if he could kiss her while she was on duty outside the home in Mount Kisco, N.Y., where he was living at the time, according to Ms. Rocah’s statement and the attorney general’s report.

Fearful of saying no, she obliged, allowing him to kiss her on the cheek, according to Ms. Rocah.

Mr. Cuomo then “said something to the effect of, ‘Oh, I’m not supposed to do that’ or ‘unless that’s against the rules,’” Ms. Rocah said in her statement.

Thomas H. Mungeer, the president of the New York State Troopers Police Benevolent Association, said in a statement that he “would not play Monday morning quarterback regarding the district attorney’s decision to not prosecute the former governor’s abhorrent conduct against a trooper.”

“However,” he added, “our trooper continues to live with what happened to her at the hands of someone she was tasked to protect.”

The second set of allegations that Ms. Rocah’s office investigated, which was not covered in the attorney general’s report, involved a White Plains public school office manager who has said Mr. Cuomo kissed her without her consent after a 2018 event at a local high school.

“He grabbed my arm and pulled me toward him and kissed me on the cheek without asking if I was OK with such a personal greeting,” the woman, Susan Iannucci, said at an August news conference, according to lohud.com. “I smiled nervously afterward. I had to endure comments from people in attendance.”

The Downfall of Andrew Cuomo

The path to resignation. After drawing national praise for his leadership in the early days of the pandemic, New York Governor Andrew Cuomo was confronted with several scandals that eventually led to his resignation on Aug. 10, 2021. Here is what to know about his political demise:

Sexual harassment accusations. Multiple women accused Mr. Cuomo of harassment, including groping and lewd remarks. An independent inquiry by the New York State attorney general corroborated the accounts. The investigation also found that he retaliated against at least one woman who made her complaints public.

Nursing home controversy. The Cuomo administration came under fire for undercounting the number of nursing-home deaths caused by Covid-19 in the first half of 2020. The official tally might have undercounted the true toll by as much as 50 percent.

Book deal. The attorney general’s report found that Mr. Cuomo used state workers to produce his pandemic memoir, breaking a promise to the Joint Commission on Public Ethics not to use state resources for its completion. The board subsequently voted to revoke its authorization for the book.

Chris Cuomo’s involvement. Chris Cuomo, a CNN anchor and Andrew Cuomo’s brother, was suspended indefinitely by the network on Nov. 30, after the New York State attorney general released new evidence about his far-reaching efforts to assist his sibling that were in breach of journalistic standards. He was fired on Dec. 4.

“We are gratified that the district attorney’s office in their press statement today indicated that they found her allegation and Susan to be credible,” said Gloria Allred, Ms. Iannucci’s lawyer.

Ms. Rocah noted in her statement that her decision not to prosecute Mr. Cuomo did not preclude his accusers from suing him.

Mr. Cuomo does face a misdemeanor sex crime charge in Albany County based on a criminal complaint filed by the sheriff there. The Albany County district attorney, David Soares, who called the complaint “potentially defective,” has not yet committed to prosecuting the case.

“As of now, that is still the scheduled court appearance date,” Cecilia Walsh, a spokeswoman for Mr. Soares, said on Tuesday. “There are no additional updates at this time.”

The Oswego County district attorney’s office, which is investigating an allegation concerning an incident involving Mr. Cuomo in its jurisdiction, did not respond to a request for comment. A spokesman for the Manhattan district attorney, which has also opened an inquiry, declined to comment.