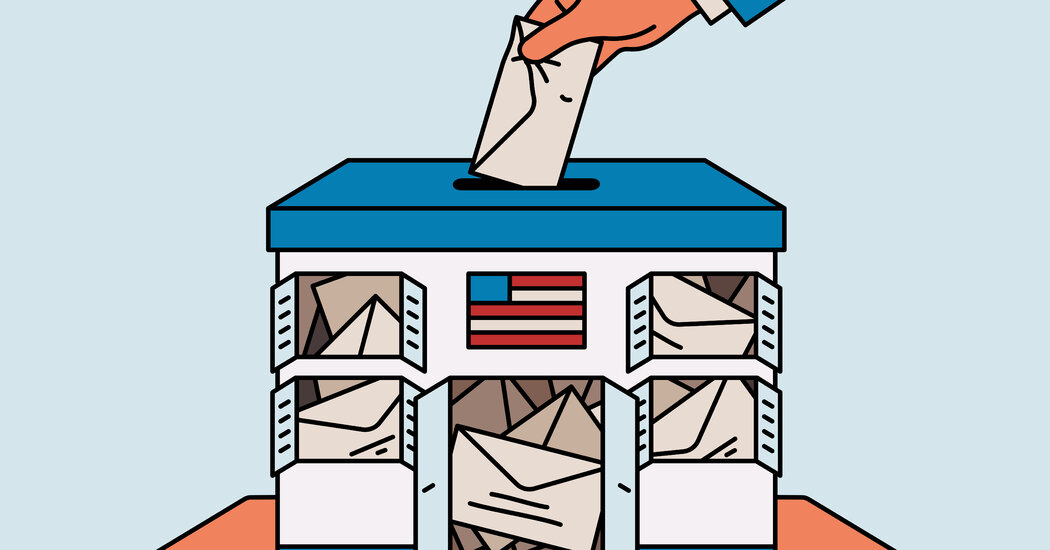 With an opinion piece in The Charleston Gazette-Mail on Sunday, Senator Joe Manchin, Democrat of West Virginia, effectively killed his party’s ambitious voting-rights reform twice over. First, he said he would vote against the bill in question — the so-called For the People Act. (In a Senate split 50-50, his defection looks decisive.) Second, he promised to defend existing Senate filibuster rules, which allow Republicans to prevent the bill from coming to a vote in the first place.

For Democrats, the op-ed held more insult than injury. Mr. Manchin’s position has been clear for months. What is new is the grounds for it: Low partisanship, he implied, not high ideals, is the source of his colleagues’ vision.

He has a point.

The vision of voting rights that worries Mr. Manchin was succinctly captured in a communiqué that arrived last month in the inboxes of those who support the Brennan Center for Justice at the N.Y.U. School of Law. New laws proposed or passed in Republican-controlled states — Georgia, Florida, Texas, Arizona — have cracked down on early voting, voting by mail and the use of unmanned drop boxes, the email warned. “Nobody,” it stressed, “should erect barriers that would curb the freedom to vote. Period.”

It is a stirring exhortation, but does it make any sense? Democracy is a system, a set of procedures — not just a mood or a dream. Barriers and curbs are what it is built out of. If you don’t have them, you don’t have a democracy. The important thing is that they be reasonable.

The definition of reasonableness is proving elusive. When Republicans in the Texas Legislature were on the verge of passing their new voting law at the end of May, Democrats staged a walkout, denying the chamber a quorum and stalling the bill’s passage. Observers disagree about whether these Texan tactics are protecting democracy or sabotaging it.

The Democrats who control both houses of the U.S. Congress discuss the conflict over voting in apocalyptic terms. The For the People Act aims to extend the voting practices that Republicans have been curtailing. Democrats describe Republicans’ tighter regulation as “disenfranchisement” and even “voter suppression.” Representative John Sarbanes, the Maryland Democrat who introduced the House version of the For the People Act, H.R. 1, has spoken of the bill as a way of addressing “the need for comprehensive, structural democracy reform.”

That is the wrong way to look at the For the People Act. It has none of the hallmarks of a revolution in voting rights. It does not open the vote to new classes of people as the 15th, 19th and 26th Amendments did. Those amendments granted the vote to ex-slaves and nonwhites (1870), women (1920) and 18-year-olds (1971). (The new bill does seek to disqualify states from permanently denying the vote to felons, though that would most likely require a constitutional wrangle over the 14th Amendment.)

Since real voting-rights breakthroughs, by definition, admit people from outside the political system, they shatter political coalitions and produce bipartisan votes. Women’s suffrage did that a century ago. So did civil rights in the 1960s. By contrast, the new election bills, on both sides, are among the most partisan in memory. H.R. 1 got no Republican votes. On initial passage, Texas’ Republican-sponsored bill got no Democratic support in either chamber.

You will find good ideas in the Democrats’ bills (like making Election Day a national holiday, and backing up electronic ballots with paper ones, to facilitate recounts) and just as many in the Republicans’ (Texas’ bans the public funding of third-party ballot distribution). What you won’t find is a single innovation that works against the partisan interests of its sponsors. When Mr. Manchin writes in his op-ed that the argument over voting rights “is not about finding common ground, but seeking partisan advantage,” he does not lack for evidence.

Democrats are offering something different than what they say: not an expansion of voting rights but a relaxation of voting regulations. The For the People Act would codify the looser rules many states adopted in order to conduct the 2020 elections in the midst of a pandemic. That election had the largest turnout rate (66.3 percent) since 1900, and strengthened Democrats. But the looser rules were not so much triumphs of reason as concessions to Covid-19. The conditions that made the new rules seem normal or common-sensical no longer obtain. We might want those rules. But we don’t need them.

There is always a paradox when it comes to democratic elections. They must be opaque, in order to guarantee ballot secrecy and prevent intimidation. But they must also be transparent, in order to prevent fraud. The perennial danger is that some actor with a partisan interest might interpose himself in one of the opaque spaces to make the contest less fair.

At the crudest level, a politician can use private pressure as a way to render himself unaccountable to an electoral verdict. That is what President Donald Trump did when, on Jan. 2, two months after his electoral defeat, he phoned the Georgia secretary of state to seek the reversal of its results in that state. (“Fellas, I need 11,000 votes. Give me a break.”) Certain reforms urged by Democrats are meant to pre-empt abuses and irregularities specific to the Trump era. Title X of H.R. 1, for instance, includes requirements that presidents and vice presidents disclose their tax returns.

The basic practice that Republicans seek to curb is ballot harvesting: Whenever voting happens elsewhere than at a voting booth, third parties are responsible for conveying voters’ intentions to authorities. Obviously, bringing couriers into the voting system can increase turnout — consider “shut-in” older people in nursing homes and elsewhere. Just as obviously, ballot-harvesting increases opportunities for fraud — consider the same older people, chatting about their voting preferences as they plan to hand their votes to a partisan political activist. Some states authorize only relatives or caregivers to deliver votes; others, like California, have no such restrictions, opening the way for activist groups.

It is largely to prevent ballot harvesting that most states used to allow absentee voting only in extraordinary circumstances. The prevailing understanding was that, other things being equal, a slightly lower rate of participation was a price worth paying for an election less susceptible to corruption. Absent a pandemic, there is a coherent case that there should never be absentee or mail-in balloting.

It is striking that reformers in both parties have so little to say directly about what is arguably the biggest problem for the country’s electoral integrity: the dragging out of vote-counting till long after Election Day. Nothing did more to escalate tensions in the days immediately following last Nov. 3 than the indeterminate results in Arizona, Georgia, Nevada, North Carolina and Pennsylvania, as Americans waited for who-knows-how-many votes to come in from who-knows-where.

Except in extraordinary cases like the Florida recount of 2000, there is no valid reason for long counting lags. They seldom happened even when vote counting was much more primitive than it is today.

An election in which votes are still being received even as counts are being made public is, ipso facto, an election vulnerable to manipulation. When political operatives understand that they need only a few votes from their allies in District X to put them over the top, occasions arise for malfeasance on one side and paranoia on the other. The result can be lawsuits meant to muddy the count, desperate searches for new sources of votes and back-room chicanery of the sort in which Mr. Trump tried to involve the Georgia secretary of state.

Maintaining wide and equal access to ballots is a democratic necessity. If it were the only necessity, the For the People Act would be unobjectionable, and Mr. Manchin’s misgivings idle. But there is a second necessity: simplicity. The public will trust a voting system only to the extent that it is comprehensible and resistant to manipulation. Multiplying the methods, platforms and times of voting adds complexity. And in a democracy, complexity is often corruption waiting to happen.