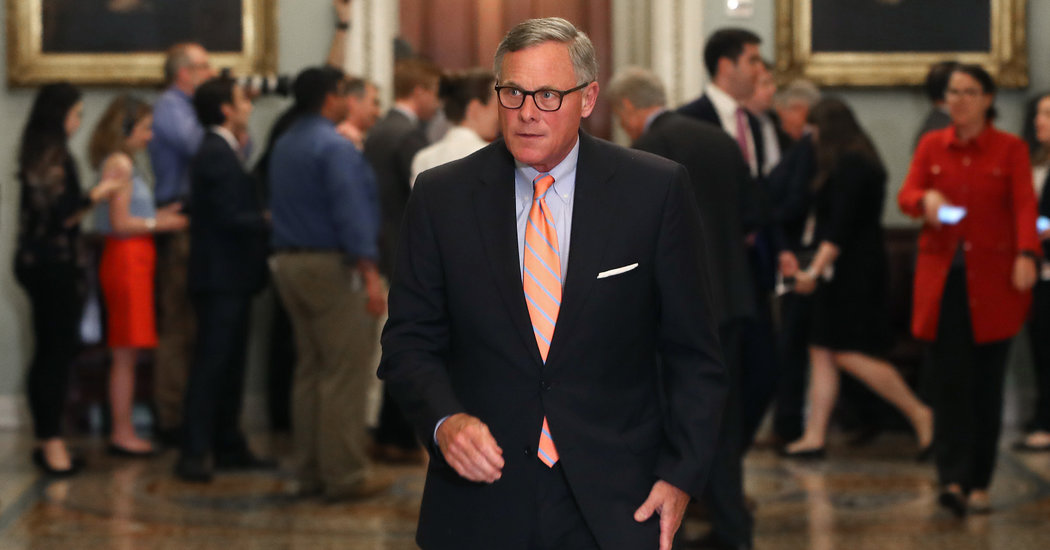 Crisis often brings out the best in a people. As the coronavirus spreads its devastation, countless Americans are stepping up to perform acts of heroism and compassion, both great and small, to aid their neighbors and their nation.

Then there are certain not-so-inspiring members of the United States Senate.

Richard Burr, Republican of North Carolina, and Kelly Loeffler, Republican of Georgia, are in the hot seat this week, facing questions about whether they misused their positions to shield their personal finances from the economic fallout of the pandemic, even as they misled the public about the severity of the crisis. According to analyses of their disclosure reports filed with the Senate, the lawmakers each unloaded major stock holdings during the same period they were receiving closed-door briefings about the looming pandemic.

These briefings were occurring when much of the public still had a poor grasp of the virus, in part because President Trump and many Republican officials were still publicly playing down the threat. Instead of raising their voices to prepare Americans for what was to come, Mr. Burr and Ms. Loeffler prioritized their stock portfolios, in a rank betrayal of the public trust — and possibly in violation of the law.

It is unclear precisely what information about the pandemic either Mr. Burr or Ms. Loeffler received in the briefings before their stock sales. But any use of nonpublic information in guiding such dealings would have been not only unethical but almost certainly illegal. Lawmakers and their aides are explicitly barred from using nonpublic information for trades by the STOCK Act of 2012 (the acronym stands for Stop Trading on Congressional Knowledge). Mr. Burr of all people should know this, since he was one of only three senators to vote against the bill.

As chairman of the Intelligence Committee, Mr. Burr is privy to classified information about threats to America’s security. In February, his committee was receiving regular briefings about the coronavirus. He is also a member of the Health Committee, which, on Jan. 24, co-sponsored a private coronavirus briefing by top administration officials for all senators.

On Feb. 13, Mr. Burr began a series of stock sales, according to an investigation by ProPublica, which found that, in 33 separate transactions, he unloaded “between $628,000 and $1.72 million of his holdings,” including significant investments in three hotel chains. Unlike his previous disclosure reports, which showed a mix of selling and buying, these transactions were all sales.

Mr. Burr’s public comments during this period were more bullish. In a Feb. 7 opinion piece for Fox News, he and his co-author, Senator Lamar Alexander of Tennessee, a Republican, boasted of how well Congress and the Trump administration had prepared America to deal with whatever public health threats came its way.

To be fair, the senator did give at least a few of his constituents a heads up. At a Feb. 27 private luncheon with business and community leaders from North Carolina, he warned that the virus stood to cause major upheaval. “There’s one thing that I can tell you about this: It is much more aggressive in its transmission than anything that we have seen in recent history,” he said, according to a recording obtained by NPR. “It is probably more akin to the 1918 pandemic.” He told his audience to prepare for travel disruptions, school closings and other shocks to the system.

On Thursday, Mr. Burr unleashed a Twitter thread accusing NPR of misrepresenting his speech in a “tabloid-style hit piece.” He did not mention his stock dump.

Mr. Burr’s spokesman has since offered up a defense that sounds more like a confession, noting that Mr. Burr filed disclosures on transactions made “several weeks before the U.S. and financial markets showed signs of volatility due to the growing coronavirus outbreak.”

Yes. That is the point.

Ms. Loeffler, who also sits on the Health Committee, is in a similarly sticky situation. On the very day of the committee’s coronavirus briefing, she began her own stock sell-off, as originally reported by The Daily Beast. Over the next three weeks, she shed between $1,275,000 and $3.1 million worth of stock, much of it jointly owned with her husband, who is the chairman of the New York Stock Exchange. Of Ms. Loeffler’s 29 transactions, 27 were sales. One of her two purchases was of a technology company that provides teleworking software. That stock has appreciated in recent weeks, as so many companies have ordered employees to work from home.

Early Friday, Ms. Loeffler issued a statement asserting that neither she nor her husband is involved in managing her portfolio.

Even as she was shedding shares, Ms. Loeffler was talking down the threat of the coronavirus. “Democrats have dangerously and intentionally misled the American people on Coronavirus readiness,” she tweeted on Feb. 28, assuring the public that the president and his team “are doing a great job working to keep Americans healthy & safe.”

As anxiety spread, she talked up the economy. “Concerned about the #coronavirus?” she tweeted on March 10. “Remember this: The consumer is strong, the economy is strong & jobs are growing, which puts us in the best economic position to tackle #COVID19 & keep Americans safe.”

Faced with calls for his resignation from across the political spectrum, Mr. Burr on Friday issued a statement insisting that his stock sales had been based solely on public information and that he had asked the Senate Ethics Committee to “open a complete review of the matter with full transparency.”

There is pressure for Ms. Loeffler to step down as well, and the recent stock dealings of other senators are now being dissected — as well they should be.

One might have expected lawmakers to be more circumspect about even the appearance of self-dealing after what happened to the Republican Chris Collins, the former congressman from New York, who was sentenced to 26 months in prison earlier this year after pleading guilty to insider trading charges. While at a White House picnic in June 2017, Mr. Collins repeatedly called to alert his son that a small pharmaceutical company in which the family was deeply invested had failed a critical drug trial. Based on the not-yet-public information, Mr. Collins’s son unloaded his holdings in the company, avoiding hundreds of thousands of dollars in losses.

“What I’ve done has marked me for life,” Mr. Collins said tearfully at his sentencing hearing in January.

Apparently, more needs to be done to protect lawmakers from themselves. Last May, two Democratic senators, Jeff Merkley of Oregon and Sherrod Brown of Ohio, introduced legislation requiring members to place personal investments in a blind trust, or hold off on making any trades, during their time in office. They would also be prohibited from serving on corporate boards.

There may, of course, be perfectly reasonable explanations for what, initially, appears to be illegal — and morally reprehensible — behavior. Mr. Burr and Ms. Loeffler deserve the opportunity to provide those explanations. The Senate should initiate an ethics investigation of all accusations, and, if warranted, refer relevant findings for criminal prosecution.

That said, explicit criminality aside, the real scandal here is the way in which these public servants misled an already anxious and confused public. In times of crisis, the American people need leaders who will rise to the occasion, not sink to their own mercenary interests.