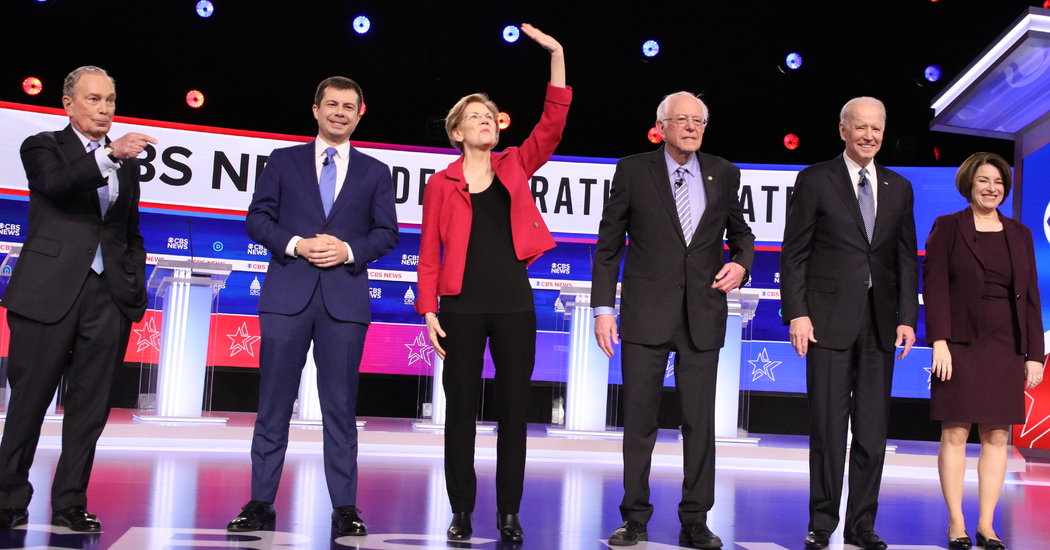 This Tuesday is the big one — Super Tuesday, when 14 states, and American Samoa, will vote in Democratic primaries and caucuses. We recently asked our columnists to make their best cases for the six strongest Democratic candidates.

We also checked in with readers to see which candidates they’ve landed on at this point in the race. They told us how they’ve adjusted their expectations, compromised idealistic ambitions and, for some, settled on a backup hero(ine).

A selection of their stories, edited for length and clarity, follow.

Joe Biden: ‘All I want is Uncle Joe to read me a bedtime story’

I was a strong Joe Biden supporter and then I got Pete Buttigieg curious. But I still plan on voting for Biden on Super Tuesday. The world needs healing right now and Biden is the only candidate that can restore the world’s faith in America. After four years of Trump, all I want is Uncle Joe to read me a bedtime story that ends in happily-ever-after. — Jocelyn Arthun, 36, Memphis

Pete Buttigieg is my first choice, but I’m not sure he’s electable nationally so I changed my dream ticket to Biden/Buttigieg. I would gladly vote for a Michael Bloomberg/Buttigieg ticket as well, though I often think about the fear that involuntarily grips me if I ever see a police car following me, an elderly white woman. I cannot imagine what it must be like for a young black male. Bloomberg has acknowledged that stop-and-frisk was a mistake. Still, he and Buttigieg both have issues with black voters, so I guess it’s back to the practical ticket of Biden/Buttigieg. — Deborah Horan, 66, Wayne, Pa.

It has been, and will be, Biden all the way. I’m a moderate Democrat that wants a president who will be able to compromise and work across the aisle, who takes the oath of his office as a sacred promise to all residents of the United States. All the rest of the candidates have something to bring to the table, but I want Biden sitting at the head of it. His nickname is Papa Joe for good reason. — Carol Chaoui, 70, Pleasantville, N.J.

For the first time, I’ve been uncommitted but drifting to a safe harbor of Biden and generating excitement with a choice like Stacy Abrams for vice president. — Lawrence Arendt, 63, Indiana

Michael Bloomberg: ‘According to game theory, Bloomberg is our best bet’

Being a left-leaning moderate, I was reluctantly on Team Pete. Now that Bloomberg is in the race, I believe he is best suited for the job and the most likely to win. I see his ties to Republicans as an asset. He can bring in moderates who hate Trump, but would vote for Trump over Sanders. Not a single Republican I know would vote for Bernie Sanders or Elizabeth Warren. According to game theory, Bloomberg is our best bet. — Elle F., 36, Columbus, Ohio

I switched from Warren to Sanders, and settled on Bloomberg. I’m a person of color, a child of immigrants, and a woman. I am proud of America and proud to be American with my cultural roots adding to the enrichment of our evolving modern culture. I am deeply thankful to this great country and want it to be a world leader on climate issues and education. This is where I trust a Bloomberg administration to lead us, and actually excel. — Andrea, 40, Brooklyn

As a sophomore in college, I was a Bernie ideologist. I enjoyed the concept of free college. But as I realized there were better middle-of-the-road candidates like Cory Booker, I changed my mind. Now that other centrists have dropped out, the best option to unite the parties is Bloomberg. I think Trump saying he would rather face Bloomberg than Sanders is a bluff. He knows he can beat Bernie, and he is scared of Bloomberg. — Graham Sweetnam, 20, Massachusetts

I’m a 2016 Trump voter looking for a better alternative. Not a progressive by any means, but at the outset of the Democratic primaries I was interested in Andrew Yang and Amy Klobuchar. I had a look at Bernie but I can’t stomach his radical ideas and take-no-prisoners approach. I don’t trust Biden’s age or what Warren says. Yang is out and Klobuchar has no realistic shot, so I’m down to my best case scenario: a Bloomberg/Buttigieg ticket. — Dennis M, 36, Atlanta

I’m a millennial and gay. I was leaning toward Elizabeth Warren, but the more I heard the rhetoric spewed by many of the candidates, the more I began to love hearing Pete Buttigieg speak of unity rather than division.

I live in the rural south and many of my neighbors are voting for Trump because they can’t bring themselves to vote for a Democrat because of religious reasons surrounding abortion. Pete Buttigieg reflects my views as a Christian; it’s unlikely God would want people to vote for Trump. I’ll likely vote blue regardless, but I don’t think the other candidates will do as good a job as Pete if they are elected, despite his limited experience in Washington. — Mitchell Faust, 29, McKenzie, Ala.

I Initially supported Cory Booker, but his support for reparations lost me. I drifted to Elizabeth Warren’s enthusiasm but I don’t believe her health care plans have a chance on a number of levels. I’m now supporting Mayor Pete. He’s mature beyond his years, whip smart and has an even keel. — Steve McMahon, 69, New Jersey

I’m a progressive and now favor Amy Klobuchar over Elizabeth Warren. People are anxious enough and Klobuchar doesn’t promise utopian dreams. She also seems to be the only one who isn’t angry. — Margaret, 70, Palo Alto, Calif.

I shifted from Buttigieg to Warren to Amy Klobuchar. Warren and Sanders lost me with their inability to clearly explain the financing and administration of Medicare for All, despite my actually wanting a single payer option. I still like Pete — he’s intelligent and articulate, and understands the big picture. But his “you can keep your insurance if you want” policy only works if it is a continuation of the ACA, which I believe is the best policy short of a single payer plan.

Enter Amy, a compassionate, realistic progressive with experience and heart. I know she’s not resonating with African-Americans and Latinos, but hopefully they would warm up to her if she were the nominee. As for Biden and Sanders: good people, but too old. As to the billionaires, forget about it. — Tom Johnson, 69, Carson City, Nev.

I started out supporting Kamala Harris, then Cory Booker. Compared to Warren and Sanders, I am a moderate (but liberal-minded) Democrat and I believe every candidate must explain how to pay for their proposals. I now support Amy Klobuchar because she is experienced, practical, realistic, moderate and willing to work with independents and Republicans. — Kris Abrahamson, 67, Santa Rosa, Calif.

I was hoping for a strong showing from Elizabeth Warren, but it has become clear to me that Bernie Sanders has to be the nominee if the Democrats are to beat Trump and take seats in the Senate. His youthful supporters in red states are far more important than any swing voters that the Democratic establishment thinks they need to win. — Walt Roshon, 59, Delaware

The last time I voted for a Democrat for president was Barack Obama in 2008. He was such a crushing disappointment that I’ve voted third party in each presidential election since. If Bernie is not the Democratic candidate, it will be very difficult for me to vote for another, but I would consider it. The only one entirely off the table for me is Bloomberg, whose “selection” I think would be worse for the country than another four years of Trump. — Carla, Old, Northeast Ohio

I started off supporting Beto O’Rourke because I was really inspired by his Senate race in Texas. Although he’s 47, he felt more “millennial” to me than Pete Buttigieg and more “woke” to common millennial concerns than any other candidate at the time. But once he started his presidential campaign, he just fell flat. He seemed more like a youth pastor trying to stay relevant. I went back to Elizabeth Warren, who I had supported as far back as 2012. I knew her politics aligned with mine and that she was qualified for the job. But then it seemed like her chances of electability were dropping. After watching several debates, I remembered why I voted for Bernie Sanders in the 2016 primaries: every time he’s onstage or talking at an event, I clap after nearly everything he says. I find myself saying, “Hell yes!” every time he talks about M4A, Universal Child Care and legalizing cannabis. Once again, I’m feelin’ the Bern! — Colin C., 29, Indianapolis, Ind.

I am a supporter of Andrew Yang, and even though he has dropped out I still advocate for his platform and hold him as my new benchmark for candidates. All others fall short, so I am voting based on whom I think is most likely to bring Yang into their administration, which I believe is Senator Sanders. I think he is too old and too divisive, but here we are. #CouldaHadYang — Dylan Biggs, 22, Washington, D.C.

Elizabeth Warren: ‘By far the most qualified’

At the start of the primaries, I was troubled by aspects of all of the candidates. But now I am staunchly for Elizabeth Warren. Every candidate makes mistakes and has flaws, but she is by far the most qualified, the most dynamic on the debate stage and the most nimble minded. Also, she’s a little bit of a freak, and I love that. — K.D. Sagias, 23, Sarasota, Fla.

I was originally a Kamala Harris supporter, but was unmoored when she dropped out of the race. I’m moderately progressive (or is it progressively moderate?) so I was looking for someone who I thought would match where I think the party needs to head. At first, I thought I could find that in Buttigieg, then Klobuchar, then Booker, then Klobuchar again. I thought Warren was too far left for me, but after reading her plans and listening to her debates, I have no doubt that she will be the best president for our country right now. She knows what it’s like to be on the bottom, and I think she’ll bring that mentality to the presidency to help the entirety of our population move forward into a better future. — Anthony Reale, 23, Los Angeles

I originally wanted Sherrod Brown to run, and was disappointed when he decided not to. He’s a progressive who appeals to working people in red Ohio. I still think he would have made the best candidate. Then I saw a clip of Mayor Pete, and like many Democrats was blown away by his intelligence, thoughtfulness, ability to talk about anything, but eventually gravitated to Elizabeth Warren, who seemed to have all the pluses of Bernie Sanders’ progressive agenda, while appealing to a broader range of the electorate. — Eric Beldoch, 61, Ardsley, N.Y.

My heart has been with Warren from Day 1. It’s pointless to try to predict who has the best chance of beating Trump, so I’m going to stick with her and hope she can prevail at a brokered convention. I’d like to see all the serious candidates — Kamala Harris and Cory Booker (not Tulsi Gabbard) — make a public appearance immediately, pledging not only to support each other in the general election and to serve in each other’s administrations, but to agree on a common denominator platform or statement of principles, so that we know what unites this party even while they differ over details. I think this year calls for this collective approach. — Joan Friedman, 66, Wooster, Ohio