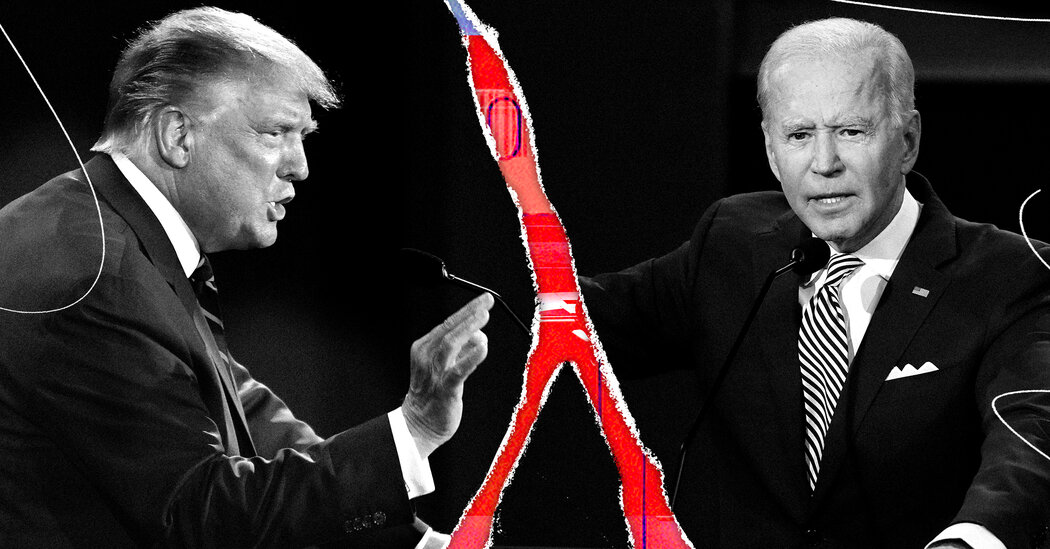 On a spring day in the nation’s capital in 1856, five years before the start of the Civil War, Preston Brooks, a staunchly pro-slavery congressman from South Carolina, entered the Senate chamber, approached the desk of Charles Sumner, an abolitionist senator from Massachusetts, and, in retaliation for a scathing speech Sumner had given two days earlier condemning his colleagues for their perpetuation of human bondage, bludgeoned him with a gold-capped cane until he lost consciousness, blinded by his own blood.

So in one sense, Tuesday night’s presidential debate was not the worst breakdown of official discourse in American history. But it was, nonetheless, an acutely cursed spectacle, the logical descent of political pornography into civic snuff film.

Another debate is scheduled to take place on Oct. 15, and a third one on Oct. 22. But in the wake of Tuesday’s fiasco, many journalists and even sitting members of Congress have called for those debates to be called off. Are they right? Here’s what people are saying.

The case for cancellation

In Slate, Christina Cauterucci argues that the debates should be canceled for the simple reason that the first was almost completely unhelpful to the American public, who had nothing to gain from a night of men screaming at each other. “With the exception of a few uninterrupted moments of Biden explaining his climate plan, there was almost nothing of substance to glean from the event,” she writes. “If there is someone out there who hasn’t heard enough about these two candidates yet, who isn’t quite sure whether the country would be best served by the current president ruling for another four years or Biden taking the wheel, I don’t know her.”

There is reason to question the public utility of such pageants. According to a predebate poll, 74 percent of Americans had planned to watch on Tuesday, but just three percent thought it would be “very likely” to sway their vote. And the debate didn’t seem to: “In fact, very few people changed their minds at all about how likely they were to vote for each candidate,” FiveThirtyEight reported on Wednesday.

What’s more, some viewers felt that the debate was not just uninformative but dangerous. At one point, Mr. Trump refused to condemn white supremacist and neo-fascist groups, who immediately celebrated the moment as an endorsement of their violent ideology. “He legitimized them in a way that nobody in the community expected,” Rita Katz, executive director of a nongovernmental organization that monitors online extremist groups, told The Washington Post. “In my 20 years of tracking terrorism and extremism, I never thought I’d see anything like this from a U.S. president.”

Throughout the debate, Mr. Trump also assailed the integrity of the election, which some analysts say constituted its own threat to the democratic process. In keeping with a long disinformation campaign aimed at suppressing the vote, the president angrily insisted there was no way the election could be conducted without fraud and refused to say he would accept the result, promising to throw it to the Supreme Court, Congress or the streets if he was not re-elected.

“We have never heard a president deliberately cast doubt on an election’s integrity this way a month before it happened,’’ Michael Beschloss, a presidential historian, told The Times. “It reeks of autocracy, not democracy.”

At another point, the president encouraged his supporters to “go into the polls” and “watch very carefully” — a formulation many interpreted as an incitement to voter intimidation.

For these reasons, the Times columnist Frank Bruni argues that the Commission on Presidential Debates has a responsibility to cancel the remaining events: “He’s maneuvering himself into position to steal this election. On Tuesday night he turned the debate commission and every television network and internet site that aired or streamed the event into his accomplices,” he writes. “To give him a stage that grand again is to commit civic suicide.”

Can the debates be saved?

The Commission on Presidential Debates seemed to recognize that Tuesday’s event did not exactly redound, as they had hoped, to “the benefit of the American electorate.” On Wednesday, the organization announced that they would be pursuing measures and “additional tools” to ensure “a more orderly discussion of the issues.”

How? The organization is reportedly weighing cutting off the candidates’ microphones if they break the rules, a practice that has been used in senatorial and gubernatorial debates with some success, as Aaron Mak notes in Slate. The plans have not been finalized, however, and some argue that the idea might fail — the president is loud — or even backfire. Another option under consideration is penalizing interruptions by forcing the offending candidate to yield more time back to his opponent.

Steve Almond of WBUR suggests that the commission also empower an independent fact-checking organization that can inform viewers whether candidates’ claims are true, mostly true, misleading or false. “This might not deter the candidates from making false and slanderous statements,” he writes, “but it would create a set of consequences for lying to the American people.”

In Politico, Jeff Greenfield also points out that the next debate will have a town-hall format, which he argues might make for a much more productive experience. Because the candidates will have to interact directly with voters, the burden of maintaining order won’t fall solely on the moderator, and Mr. Trump may find himself less willing to interrupt someone whose vote he needs. “To strain an image, even the most disputatious of family arguments sometimes cease when the neighbors arrive,” Mr. Greenfield writes.

On the other hand, in the view of The Times editorial board, the dysfunction of the first debate was precisely what made it instructive. “The debate was excruciating to watch for anyone who loves this country, because of the mirror it held up to the United States in 2020: a nation unmoored from whatever was left of its civil political traditions, awash in conspiratorial disinformation, incapable of agreeing on what is true and what are lies, paralyzed by the horror of a pandemic that has killed hundreds of thousands and beholden to a political system that doesn’t reflect the majority of the country,” the board wrote. “Americans need to face the man who is their president.”

Mr. Biden, for his part, has confirmed that he plans to. “Politically and substantively that’s the right move,” tweeted Liz Mair, a Republican strategist. “It will just suck for the rest of us expected to tune in.”

MORE ON THE DEBATES

“Last Night’s Debate Was a Disaster. That’s Exactly Why There Should Be More of Them.” [Reason]

“The Ugly Familiarity of Trump’s Debate Interruptions” [The Atlantic]

Here’s what readers had to say about the last edition: What have we learned from Trump’s tax revelations?

Dean Baker, an economist at the Center for Economic and Policy Research, from Washington, D.C.: “If we want to get more money out of the rich, and reduce evasion/avoidance, a simple route is to change the focus of the corporate income tax from profits to stock returns. The only way for a company to get out of a tax on stock returns would be to cheat its shareholders. I did a piece on this for Bloomberg a few weeks ago.”

Gary from Washington: “The central question this episode points us to is ‘Who owns the Congress, and how can we overcome their resistance to reform?’ There’s little genuine debate about the fact that the tax system is broken — conservatives and big business have bludgeoned the I.R.S. into submission, and federal prosecutors have surrendered to the reality that pursuing tax evasion is often a long road to a dead end. … Reform will likely require a lot more outrage than a cowed and shamefully ignorant public is capable of.”