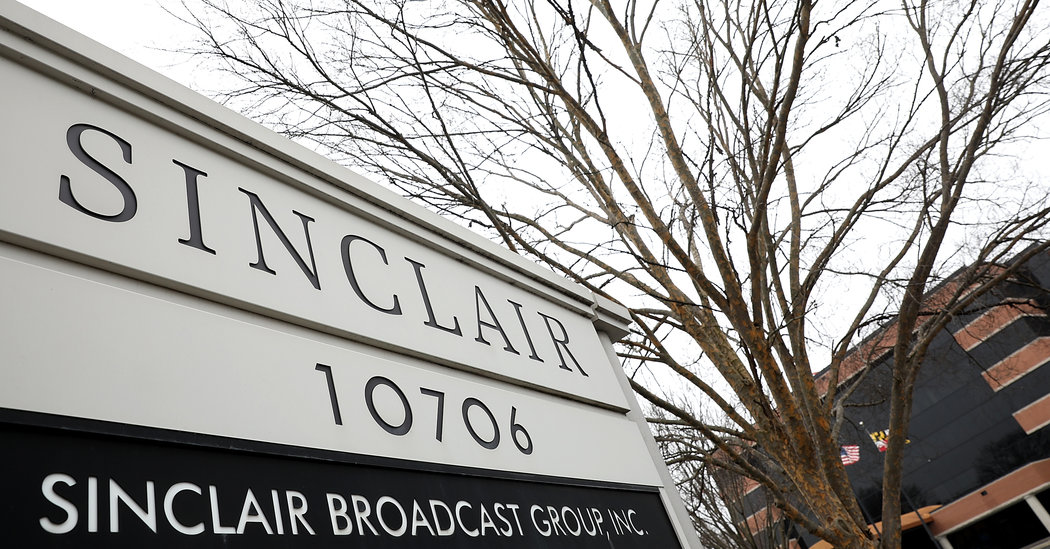 Sinclair Broadcast Group was meant to be the new Fox News, a conservative media outlet that would become an even more vocal proponent of President Trump and his policies as it took control of local televisions from coast to coast. As Sinclair’s leaders forged ties with the White House, the company’s move to buy a rival group of TV stations at one point appeared assured.

But after a series of reports raised concerns about Sinclair’s chumminess with federal agencies, there was a sudden reversal fortune. Instead of taking control of 215 stations across the country, as it had hoped when it broached the idea of buying Tribune Media in 2017, the company ended up with a booby prize: a fine of $48 million.

On Wednesday, the Federal Communications Commission ordered the company to pay the penalty, which it called the largest ever meted out against a broadcaster in the commission’s 86-year history. The fine stemmed from three investigations of the company and its thwarted attempt to acquire Tribune Media, another large operator of local TV stations, the F.C.C. said.

“Sinclair’s conduct during its attempt to merge with Tribune was completely unacceptable,” Ajit Pai, the commission’s chairman, said in a statement. “Today’s penalty, along with the failure of the Sinclair/Tribune transaction, should serve as a cautionary tale to other licensees seeking commission approval of a transaction in the future.”

The company seemed to take its punishment in stride. “Sinclair is pleased with the resolution announced today by the F.C.C. and to be moving forward,” Chris Ripley, Sinclair’s chief executive, said in a tweet on Wednesday.

The company is controlled by its chairman, David D. Smith, whose father founded the business in 1971. He had planned to give the stations — which would have reached seven in 10 American households if the deal had a gone through — a common voice through so-called “must-run” editorials that Sinclair’s on-air personalities would read before the camera.

Sinclair has been criticized in the past for its must-run editorial, accused of engineering public relations gambits favoring the Trump administration. In 2018, anchors across its stations were mandated to read a prepared script, some of which had warned viewers of “fake news” being perpetrated by mainstream outlets. In an April 2018 interview, Mr. Smith fiercely disagreed with the criticism.

“You can’t be serious!” he said in an email interview at the time. “Do you understand that as a practical matter every word that comes out of the mouths of network news people is scripted and approved by someone?”

Sinclair’s ambitions seemed unlikely to come to fruition in August 2018, when Mr. Pai said he had “serious concerns” about the broadcaster’s merger with Tribune. He asked the agency’s four commissioners to hand off its review of the merger to an administrative law judge to determine the legality of the proposal.

Still, the commission’s action on Wednesday represented was a stunning reversal. Three years ago, the merger seemed to be a done deal, thanks in part to policy changes proposed or enacted by the F.C.C. that Mr. Smith lobbied hard to obtain. They included an easing of the cap on how many stations a broadcaster could own and a relaxing of a restriction on advertising revenue and other resources shared by TV stations. The changes appeared tailored to allow a local broadcast business to get even bigger — perfect for Sinclair’s ambitions.

Toward the end of 2017, the top internal watchdog for the F.C.C. had opened an investigation into whether Mr. Pai had improperly pushed for the rule changes.

Tribune was eventually sold to another TV broadcast group, Nexstar Communications, in December 2018 for about $6.4 billion, creating the largest local broadcast company in the nation. The F.C.C. approved that deal.

In August 2018, Tribune Media revealed some of Sinclair’s hardball tactics in a lawsuit it had filed against Sinclair after the merger plan fell through.

Those tactics came about at a time when Sinclair faced opposition from the Justice Department in its bid to buy Tribune. The agency told Sinclair it would need to sell off stations in at least 10 markets to obtain approval, but the company refused, “deciding instead to antagonize D.O.J. officials,” the suit read.

In a 2017 letter addressed to Makan Delrahim, the head of the Justice Department’s antitrust division, Sinclair contrasted his position to that of Mr. Pai. “It was so refreshing to see the F.C.C., under Ajit Pai’s leadership, undertake a fundamental reform of its media ownership rules to relax regulations,” the letter read.

As the record fine on Wednesday showed, the F.C.C. ended up disapproving of Sinclair’s way of doing business.