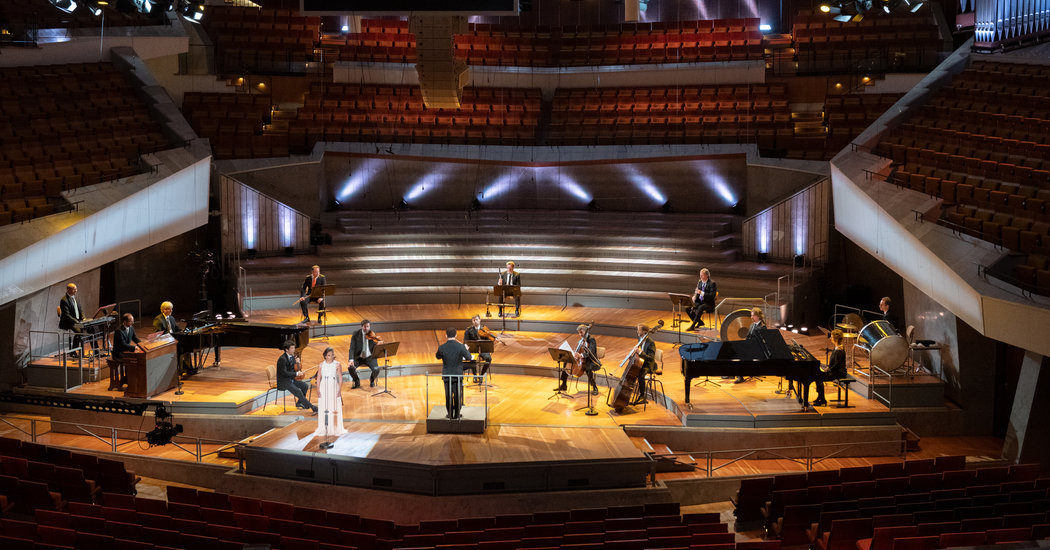 Mahler’s “Symphony of a Thousand” might not be a great idea. Schoenberg’s “Gurrelieder,” with 150 instrumentalists and even more singers? Ditto.

As the coronavirus pandemic endures, much of the attention in resuming the performing arts has been on the size and density of audiences. But symphony orchestras are often just as packed onstage as in their auditoriums. If concerts are to go forward with social distancing restrictions in place, they will have to include not just fewer listeners, but also fewer players.

But what about more varied fare? Schott/EAM, a publisher of contemporary composers, recently posted an inspiring list of works from its catalog appropriate for social distancing. Universal Edition put out an intriguing selection of opera and symphonic reductions. In a livestreamed panel discussion on Thursday, several innovative chamber orchestras will share repertory ideas. We have followed their lead with our own playlist of pieces, old and new.

Our size criteria are vague, in keeping with the broad strokes with which health advice has been drawn. But we’ve assumed that with six feet or so between string players — and rather more for winds and brasses — our hypothetical distanced orchestra couldn’t be bigger than about 40 musicians. (My pick would be Pierre Boulez’s lambent “Éclat,” for just 15.)

It may be wishful thinking that even reduced, distanced concerts will be widespread, at least among American ensembles that lack European levels of government funding. On Friday, the Nashville Symphony announced that it was canceling all its performances through July 2021; it likely won’t be the last full-season loss.

But orchestras that are able to muster even a smattering of music in the coming months would do well to use those events as opportunities for depth and diversity — not merely as proof of bare survival. ZACHARY WOOLFE

The old argument that programming risks can’t be taken for fear of losing ticket sales makes even less sense given curtailed capacities and audiences desperate for live music. Time, then, to rectify the balance: Step forward Ethel Smyth, the English suffragist and composer who was, alas, the only woman to have her work put on at the Metropolitan Opera before 2016. Her 1890 Serenade has striking vigor in its outer movements, balanced by charm and lightness in between. DAVID ALLEN

Julius Eastman: ‘The Holy Presence of Joan of Arc’

Minimalism, expressionist harmonies and punk rock energy blend to combustible effect in this high-octane piece for 10 cellos. They start out in unison, laying down a propulsive rhythm that runs like a news ticker through the 20-minute piece. Individual voices break free in yearning, sometimes anguished arcs as the texture grows ever more complex, insistent and fierce. CORINNA da FONSECA-WOLLHEIM

Keep the quotient of strings low and you could play most of Mozart’s ensemble music with distanced players, but distance is an inherent part of this piece. He clearly intended the four string sections, each joined by two horns, to sit apart, toying with space in echoes and overlapping phrases. Like so many of the serenades and divertimentos that Mozart turned out to accompany Salzburg’s social events, it’s an unbridled joy. DAVID ALLEN

Brash, zesty and confrontational, Biber’s 1673 battle piece for 10 players has always been one of the gems of Baroque music. With groups of musicians facing off like combatants, it also lends itself wonderfully to spatially distanced staging. Its eight short movements sketch various martial situations in confident strokes and a sprinkling of special effects — like the rendition of eight different campsite songs played in seven different keys. CORINNA da FONSECA-WOLLHEIM

This 1979 piece for 14 players is more opulent than its slender requirements suggest. Winds, brasses, strings, piano and percussion cycle through chattering yet softly voiced motifs — until Mr. Singleton punctuates the mist with sinuous solos or dramatic eruptions. (Listen for the trumpet launching to the top of the ensemble’s textures shortly after six minutes and 30 seconds have passed in the London Sinfonietta’s recording.) Mr. Singleton’s work for orchestras is not played often enough; this piece could help bring his voice into more regular circulation. SETH COLTER WALLS

This suite is an adaptation of an adaptation, drawn from Ms. Neuwirth’s 2003 opera “Lost Highway,” based on the David Lynch film. Of the three, it’s the most distilled version of this enigmatic and nightmarish story. Scored for six soloists and an ensemble, and incorporating live electronic processing, it conjures a funhouse of sounds — some eerie slow dance, some noir — that fade in and out like road signs passed on a night drive. JOSHUA BARONE

Just 21 minutes long and played without break, Schoenberg’s restless Chamber Symphony No. 1 (1906) is like an intensely compressed five-movement symphony. Its harmonic language clings to late-Romantic richness while inching toward atonality. Scored for just 15 instruments, this thick-textured piece might actually benefit from a performance where players are spaced apart a little, so that you can really hear the intricate individual lines, which do pile up. ANTHONY TOMMASINI

Pick a Kurt Weill piece from the 1920s, and it could probably fit onto this list. Weill was a master orchestrator, scoring his works for only the instruments he felt each needed: no more, no less. His violin concerto — written in 1924, with a young composer’s nods to Mahler and Stravinsky — pairs the soloist with a small ensemble of winds, percussion and bass. Balancing the sound isn’t easy, but when it happens, the music rings with inevitability. JOSHUA BARONE

Strauss was 81 and ailing, and Europe lay in ruins, in March 1945, when he began work on his seething, elegiac “Metamorphosen.” Written for 23 string players, it has generated many interpretations. Is it a memorial to a culture irretrievably lost? An indictment of war? The mea culpa of a bystander to Nazi crimes? What’s certain is that the music immerses the listener in a web of complicated beauty. CORINNA da FONSECA-WOLLHEIM

Once a group devotes the time to learn this composer’s language — which embraces both traditional notation and improvisation — it can play his complex scores without his direct involvement. In this 1989 composition for 29 players, the clarinets channel the excitability of Mr. Braxton’s own playing on reed instruments. Meantime, the mutating writing for strings — droning one second, quickly marching the next — reveals Mr. Braxton’s agile moves between mystery and whimsy. SETH COLTER WALLS

Wagner wrote the “Siegfried Idyll” as a birthday present for his wife, Cosima, after the birth of their son Siegfried. Scored for 13 players, the piece was first performed on Christmas morning in 1870, with the musicians arrayed on the stairs of the composer’s villa in Lucerne, Switzerland, awakening Cosima in her bedroom. Themes from the piece wound up in Wagner’s “Siegfried,” and though he later wrote an orchestral version of the “Idyll,” the original has lucid beauty. ANTHONY TOMMASINI

Getting musicians on and off the stage safely while following social distancing protocols is a particular challenge. But the finale of Haydn’s “Farewell” Symphony has a built-in solution, at least for exiting. During the last long section, Haydn, an inveterate musical jokester, instructs certain musicians to stop playing and, one by one, walk off the stage, until only the first violinist remains. ANTHONY TOMMASINI