A Spencer’s storefront in Dolphin Mall in Sweetwater, Florida. 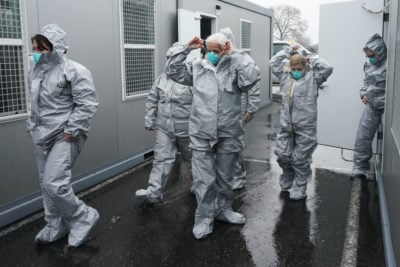 As epidemiologists urged the public to avoid nonessential shopping in hopes of controlling the spread of the novel coronavirus and suppressing its death toll, Spencer’s, as of Wednesday morning, was still asking employees to come into its stores to sell lava lamps, rubber chickens and fake poop.

The gag and gift shop that prides itself on being “the best place to work” remained open in malls across the country and beyond, five days after President Donald Trump declared a national emergency, and as employees and their families begged store leadership to close, calling its headquarters, speaking up during conference calls and peppering its social media accounts.

Just before its deadline to comment for this story Wednesday, Spencer’s announced to its employees that it would close all of its stores at 7 p.m. and would not reopen them until March 28. It said it would pay all associates during that time.

But its late response forced many to work at a time when many similar businesses had closed for the safety of their staff and customers. Three Spencer’s employees told ProPublica they are now sick, naming symptoms consistent with COVID-19, the disease caused by the virus. They mentioned colleagues who are sick as well. One tried to get a test this week but was unable to; another planned to try Wednesday.

Before Wednesday, the company had said that anyone not willing to work could stay home without losing their jobs, according to five employees and concerned family members who spoke with ProPublica. That didn’t mean they would be paid. Sales associates do not qualify for benefits. For employees who do, sick days accumulate over time, and managers have collected only a handful at this point in the year.

One woman, who said she has symptoms associated with the coronavirus but has been unable to get tested, said she went to work with early symptoms because she had already used up her only sick days. “I started to get sick. My supervisor started to get sick,” she said. “It was a sore throat, but we were still functioning. By Saturday, the two of us were really starting to feel bad. … Sunday was my day off. Monday, I went in to work and I knew at that point, my symptoms had turned into headache, had turned into chest pains and coughing, and at that point, I was like: ‘OK, you know what? This is not cool.’”

Her co-worker, who also spoke to ProPublica, was having similar symptoms and said he planned to get tested Wednesday. He confirmed that all three management associates at the store were having symptoms. The third, whose symptoms were the most mild, was asked to work on Tuesday but told to close the store early, take a couple of days to rest and come back on Friday, according to both other managers. She worked alone, afraid to call anyone else in and get them sick.

ProPublica spoke to another worker from a store in a different region. “I just woke up freezing and I haven’t taken my temperature,” she said Wednesday morning. She started feeling sick Tuesday, with a sore throat and chest congestion; her children are coughing. Because she and her husband had to work, her parents, who are older, were their only option for child care.

The employees went to work in malls where they said most stores had shuttered — department stores like Macy’s as well as competitors like Hot Topic and Journeys. Spencer’s had reduced its hours and closed in places where malls were closed. Employees were told, on a conference call with district managers on Tuesday, that stores would remain open until malls chose to close or the state or federal government mandated closure. Spencer’s, which operates more than 650 stores in the U.S. and Canada, is owned by a holding company that also includes costume and accessory retailer Spirit Halloween. The parent company, Spencer Spirit, generated over $940 million in revenue in its last fiscal year.

Hours after being sent questions by ProPublica on Wednesday, public relations officials with Spencer’s replied with an email announcing the closure and plan to pay associates. “The health and welfare of our associates and guests is always paramount,” it said. “If an associate experienced symptoms associated with Covid-19, the associate would not be permitted to work.” Store employees heard the news around the same time.

That morning, the Spencer’s website had blog posts, written in the past week, that were out of sync with the new normal, including tips for using portable toilets at music festivals at a time when large gatherings have been banned. The posts had been removed by early afternoon, and corporate officials did not comment on them or answer specific questions about employees being asked to come in sick or what precautions they had taken to keep their staff safe. Its press release said, “Our daily lives have drastically changed over the last few weeks. Our associates worked incredibly hard to provide the best experience possible and a sense of normalcy for our customers.”

Mark Robinson’s wife works as a Spencer’s store manager. He told ProPublica he was terrified every time she went to work.

“You don’t know if today is going to be the day that she came into contact with someone. People who are asymptomatic are basically carriers,” he said. “My wife had someone yesterday waiting at the gate, so a mother and her son could buy earrings. You’re going to tell me that’s essential right now, that we’re going to risk spreading contagion over earrings? At what point have we lost our minds?”

On Wednesday, he learned his wife would have to complete only one last shift before coming home. “I’m happy that they finally decided to do the right thing,” he said. “But I think it’s still worth noting that over the course of the past few days, they’ve tried to defend their stance and put money over people’s lives.

“They just fell short,” he said. “They should have been quicker to act.”