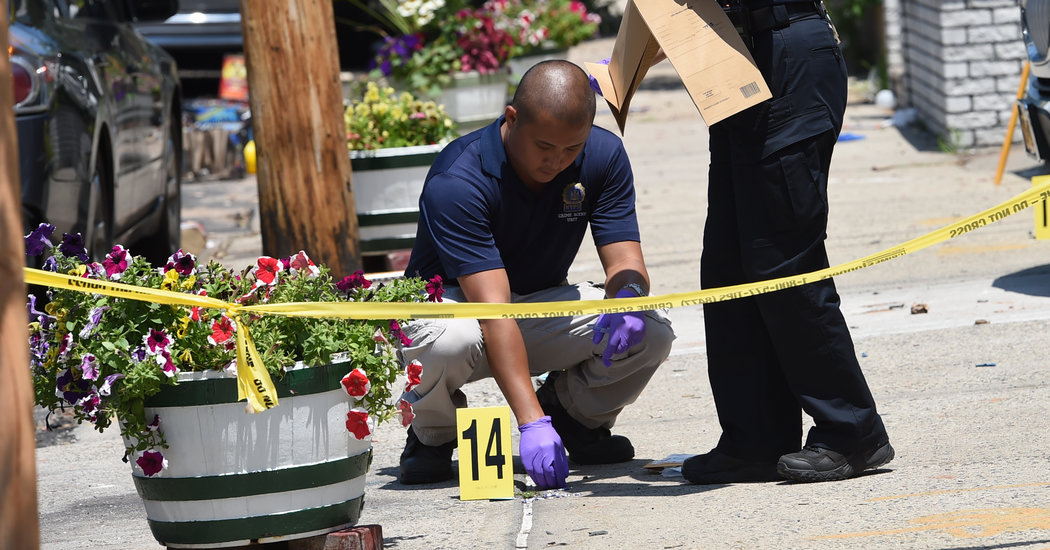 A young father crossing a Bronx street, holding hands with his 6-year-old daughter. A 15-year-old who refused to talk to the police in Manhattan. A man in a Staten Island public housing complex, found prone in his apartment.

They were among 64 people shot in a surge of shootings over the weekend in New York City, the police said. Ten of those shot lost their lives, including the young father and the Staten Island man — a wave of summertime violence that has given renewed urgency to a gun violence crisis that had been overshadowed this year by the coronavirus pandemic and by unrest over police racism and brutality.

The city surpassed 400 shootings in the first half of the year for the first time since 2016, with 528 by the end of last month; the 205 shootings in June were the highest for that month since 1996, the police said.

Other cities have seen similar spikes in shootings, most notably Chicago, where the current pace of homicides has the city poised to near its record high of 778 set in 2016. Chicago had 336 murders as of July 2; New York, with nearly three times the population, had 181 at the end of June — compared to 147 at the same time last year but a far cry from the homicide totals that exceeded 2,000 in 1990 and 1991.

Still, the surge in shootings has caused alarm in the city, and has appeared to create a rift between Mayor Bill de Blasio and senior police officials as to its cause.

“This is something that we have to double down on,” Mr. de Blasio said at a news conference on Monday, adding that the rise in shootings was fueled by several factors, but mainly the “dislocation that has happened over these last four months with the coronavirus.”

“The fact that the court system is not working, the economy is not working, people have been penned up for months and months, so many issues underlying this challenge,” he said.

But senior police officials have attributed the rise in violence to criminal justice reforms put in place over the last few years by lawmakers and prosecutors. Those changes, which include efforts by the mayor’s office to reduce the population of the Rikers Island jail complex, have put more violent criminals back on the street and erased deterrents and consequences for carrying guns and shooting them, the police have argued.

“When you take basically half the population of Rikers Island and put it onto the street and then wonder what’s going on, it’s dumbfounding to me,” the police commissioner, Dermot F. Shea, said during a radio interview on 1010 WINS on Monday, alluding to the number of inmates released from the city’s jails during the pandemic.

The commissioner directed his ire at people who he said “think they know more about law enforcement” than the police, and cited a chokehold bill passed by the City Council that makes it a crime for officers to put their knees into someone’s back during an arrest. He said officers need more resources, public support and laws that help them fight crime rather than constraining them.

Commissioner Shea’s remarks were not the only example of the police casting blame for the outbreak in violence. On Sunday, the department’s top two borough commanders in Manhattan attacked the borough’s district attorney, Cyrus R. Vance Jr., on Twitter for not showing up at crime scenes and lashed out at elected officials and violence interrupters, civilians who work to prevent gun violence.

Chief Kathleen O’Reilly, of Manhattan North, wrote on Twitter that it was “disgraceful” how many people had been shot over a 24-hour period, and asked where were the elected officials and violence interrupters. “The community is suffering,” she said.

“It is unclear what the Manhattan district attorney could substantively contribute at a crime scene,” he said.

Officials who have found themselves on the receiving end of the blame have pushed back against claims they say are incorrect and distract from the fact that police are struggling to protect a city that has become less safe. Investigators have solved one in four shootings with an arrest this year, which means the cycle of shootings and retaliations has largely been uninterrupted. The police usually solve close to a third of shootings and about half of homicide cases.

Rory Lancman, the chairman of the City Council’s committee on the justice system, and the sponsor of the chokehold bill, said the police were grasping at everything they could to fight systemic changes from the outside. Chokeholds are already banned by the department, he noted, and the Council law has not yet taken effect.

The police commissioner “has been desperately looking anywhere but the mirror” to explain the rise in major crimes and shootings, he said. “It’s not serious, and if he cannot competently and safely keep New Yorkers safe, while adhering to the very same chokehold and knee restraints that are in the patrol guide, then it is definitely time for a new commissioner.”

Donovan Richards, the chairman of the City Council’s public safety committee, said that it is the job of the police to fight crime, and he said that the department appeared to be doing the opposite of what was needed to counter calls to cut its budget and head count.

Chief of Department Terence A. Monahan, the police department’s top uniformed official, denied there was a slowdown.

John Eterno, a Molloy College professor and former city police captain, said there appeared to be a real and significant increase in shootings that is connected to officers’ sinking morale, given the barrage of criticism from politicians and the public.

“Many people have the idea that police feel very powerful with their badge and gun, and it’s the opposite,” he said. “So when you see a lack of support from a lot of places, not just from the community but also from politicians, I do think police do change their job and how they do it.”

He also cited the failure to devise effective policing strategies to replace those that have been curtailed, like street stops, or eliminated, like precinct anti-crime units.

At a news conference on Monday, police officials announced an arrest in the killing of a 17-year-old basketball player shot while attending a barbecue, and asked for the public’s help to solve several other recent shootings, including the killing of the young dad in the Bronx.

Police released video of that shooting on Sunday that showed the young father, Anthony Robinson, 29, crossing a street in the Claremont neighborhood with his daughter before a car pulled up alongside him.

A man in the front seat pointed a gun out of the passenger window and pulled the trigger, and Mr. Robinson collapsed on the pavement.

His cousin, Michael Robinson, said the father and daughter were headed to the subway station to return to Brooklyn after celebrating Independence Day in the Bronx. The girl, he said, was “a daddy’s girl, literally attached to his hip.”

The police are offering a $10,000 reward for information that would help solve the shooting, Chief Jason Wilcox announced on Monday.