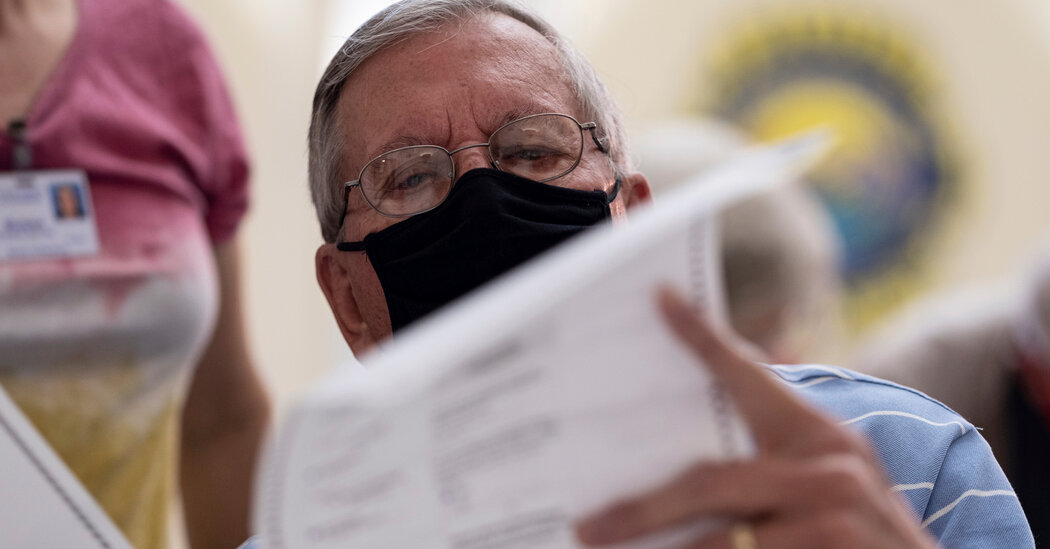 Tucked into many of the election laws Republicans are pushing or enacting in states around the country are pernicious provisions threatening punishment of elections officials and workers for just doing their jobs.

Laws like those already passed in Republican-controlled states like Georgia and Iowa, no matter their stated intent, will be used as a weapon of intimidation aimed at the people, many of them volunteers, charged with running fair elections at the local and state levels. By subjecting them to invasive, politically motivated control by a state legislative majority, these provisions shift the last word in elections from the pros to the pols. This is a serious attack on the crucial norm that our elections should be run on a professional, nonpartisan basis — and it is deeply wrong.

It is so wrong that having once worked together across the partisan divide as co-chairs of the 2013-14 Presidential Commission on Election Administration, we have decided to come together again to mobilize the defense of election officials who may come under siege from these new laws.

Bear in mind that this is happening after the 2020 election, run in the midst of a once-in-a-century pandemic, went off much better than expected. Voter turnout was the highest since 1900. A senior official in the Trump administration pronounced it the “most secure election in American history,” with “no evidence that any voting system deleted or lost votes, changed votes or was in any way compromised.” Multiple recounts, contests and court cases brought by former President Donald Trump and his allies failed to persuade any courts or state officials to overturn the results of any election.

The new laws establish civil penalties for technical infractions and subject officials to threats of suspension and even criminal prosecution. Iowa state election officials are now subject to fines of $10,000 and suspension for any actions that “hinder or disregard the object of the law.” They are also subject to criminal penalties when seeking to address disruptive conduct by partisan poll watchers. In Georgia, an election official threatened with suspension may appeal, but the law restricts state-financed support for the individual’s legal defense. The Georgia secretary of state, the chief election official, has been removed from the chairmanship of the State Elections Board, demoted to nonvoting ex officio status.

Other states are considering laws containing similar threats to the impartial administration of elections. It can be no surprise that officials around the country are also experiencing threats and harassment ranging from physical confrontation to social media postings of personal information from their Facebook pages. And this dangerous behavior is spreading throughout the electoral process. Last month, election officials in Anchorage, Alaska, issued a report describing the “unprecedented harassment of election officials” during the conduct of a mayoral runoff election.

The partisan efforts to control election outcomes will result in the corruption of our system of government, which is rooted in fair, free elections. We say this as longtime election lawyers from opposing political parties. In jointly leading the presidential commission, we worked with numerous local and state elections officials. We saw firsthand the dedication and professionalism they brought to their jobs. They work hard with inadequate resources and are rarely praised for what goes well and are quickly blamed for what goes wrong.

In 2020, after the pandemic struck, these officials performed the near-impossible task of locating replacements for thousands of poll workers, reconfiguring polling places to offer safe voting spaces for voters and poll workers and ramping up effective mail voting where allowed under state law.

Now their nonpartisan performance of their duties is under attack — even to the point of being criminalized. So we are committed to providing these officials a defense against these attacks and threats by recruiting lawyers around the country, Democrats and Republicans, to establish a network that would provide free legal support to election officials who face threats, fines or suspensions for doing their jobs. This national network will monitor new threats as they develop and publicly report on what it learns.

The defense of the electoral process is not a partisan cause, even where there may be reasonable disagreements between the parties about specific voting rules and procedures. The presidential commission we led concluded that “election administration is public administration” and that whenever possible, “the responsible department or agency in every state should have on staff individuals who are chosen and serve solely on the basis of their experience and expertise.” To serve voters, those officials would require independence from partisan political pressures, threats and retaliatory attacks.

These state laws, and the blind rage against our election officials that they encourage or reinforce, will corrode our electoral systems and democracy. They will add to the recent lamentable trend of experienced officials’ retiring from their active and vitally needed service — clearing the way for others less qualified and more easily managed by partisans. Early surveys show that in our nation’s larger jurisdictions, up to a quarter of experienced election officials are planning to leave their jobs. A primary reason they cite: “the political environment.”

No requirement of our electoral process — of our democracy — is more critical than the commitment to nonpartisanship in the administration of our system for casting and counting of ballots now being degraded by these state laws. This challenge must be strongly and forcefully met in every possible way by Democrats and Republicans alike.

Bob Bauer, a former senior adviser to the Biden campaign, is a professor at New York University School of Law and a co-author of “After Trump: Reconstructing the Presidency.” Ben Ginsberg practiced election law for 38 years representing Republican candidates and parties.