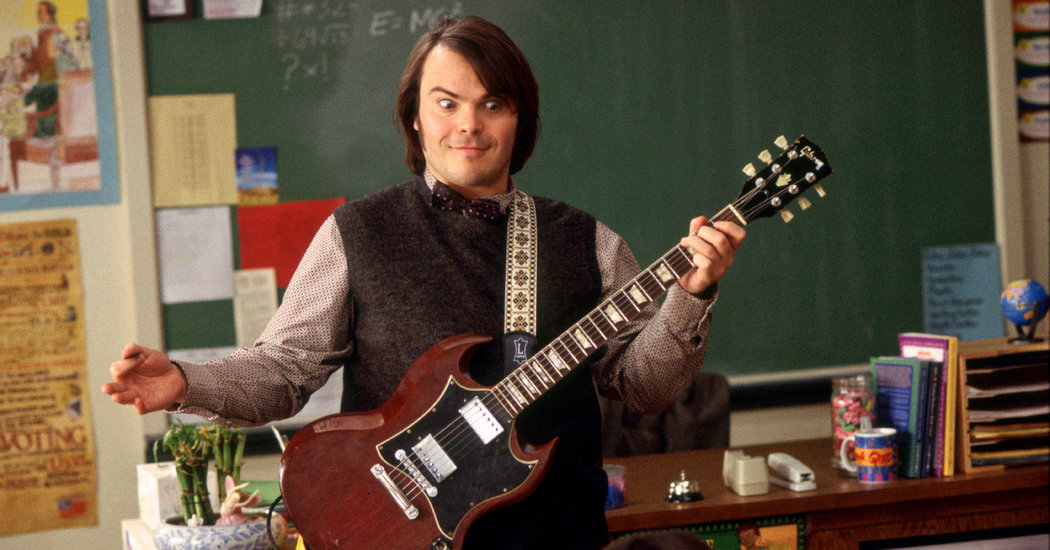 Jack Black, Michael B Jordan, Richard Pryor: A lot of favorites are leaving for U.S. subscribers this month.

Two much-loved television series leave Netflix in the United States this November, along with some heartbreaking dramas, “Dad movies,” an Oscar winner for best picture and vehicles for the considerable comic talents of Richard Pryor and Jack Black. Find out about those and more of this month’s catch-them-while-you-can titles, below. (Dates reflect the final day a title is available.)

This quietly tender and very funny comedy-drama from the writer and director Azazel Jacobs (“French Exit”) tells a story elegant in its simplicity: A long-married and long-miserable couple (Debra Winger and Tracy Letts), each in the midst of a serious affair and ready to call it quits, find themselves suddenly and unexpectedly attracted to each other again, placing them in the precarious position of cheating on their lovers with their spouse. Jacobs’s witty screenplay mines the situation for its copious comic possibilities, while Winger and Letts convincingly convey both a prickly history and an unbreakable chemistry.

Colin Firth picked up his first Oscar nomination for his rich and wrenching work in this powerful adaptation of the novel by Christopher Isherwood, written and directed by the fashion designer-turned-filmmaker Tom Ford. Firth stars as George, an English professor in 1960s Los Angeles quietly commemorating the one-year anniversary of his lover’s death while contemplating his world and his place in it. Ford casts a rapturous spell, deftly intertwining past and present, and Julianne Moore is marvelous as George’s best friend, who nurses a broken heart of her own.

Ryan Coogler made his feature directorial debut — and teamed, for the first time, with his future “Creed” and “Black Panther” star, Michael B. Jordan — in this devastating dramatization of the final day of Oscar Grant III, the young Black man who was harassed and fatally shot in the back (on camera) by a Bay Area transit officer on New Year’s Day, 2009. Coogler pulls no punches in bringing that horrifying event to life, but his film refuses to wallow in misery, either; he considers the full measure of Grant’s life, using the small interactions of that day to reveal both his struggles and his joy. Jordan’s keenly felt performance beautifully captures Grant’s complexity.

Few things on this earth are more binge-able than crime procedurals, and this import from BBC America, which ran from 2013 to 2017, is one of the best. The future Academy Award winner Olivia Colman and the “Dr. Who” star David Tennant are Hardy and Miller, a pair of mismatched police detectives whom we first meet as they investigate the murder of a young boy in a British seaside town. The personal dynamics of the duo (prickly conflicts turn to begrudging respect) are dusty, but these gifted actors breathe life and freshness into the characters and their interplay, while the gorgeous cinematography and adept supporting performances (particularly by Jodie Whittaker, who went on to play the Doctor in “Dr. Who”) keep things interesting.

Jon Favreau began his career with intimate, indie comedy-dramas like “Swingers” and “Made,” yet he ended up at the helm of giant tentpole productions like “Iron Man,” the “Lion King” remake and “The Mandalorian.” This 2014 production was something of a return to his roots, with Favreau writing, directing and starring as a chef who abandons his high-profile restaurant gig to get back to basics in a food truck. The sense of art imitating life is a bit much, but this low-key effort boasts plenty of charm, a handful of laughs and enjoyable appearances by Favreau’s famous friends.

Harrison Ford’s second (and final) outing as the C.I.A. analyst turned director Jack Ryan is one of the best spy pictures of its era, a muscular but intelligent action adventure blending politics, conspiracy theories and shootouts. The film’s finest (and most imitated) sequence, however, is also one of its quietest: a white-knuckle scene in which Ryan attempts to access and print incriminating document files as a traitorous underling (the great, wormy Henry Czerny, later of “Mission: Impossible”) is deleting them. Phillip Noyce, who also directed the previous Ryan film, “Patriot Games,” composes and cuts that scene with such sizzling style, it’s like watching the techno-thriller genre come together before your eyes.

The prolific and popular television showrunner Ryan Murphy went from respected writer to marquee name thanks to the explosive success of this six-season musical comedy-drama, which jolted the age-old conventions of the high school show with generous infusions of social issues and mature subject matter — as well as plentiful (and often ingenious) interpretations of contemporary and classic pop music. But “Glee” didn’t just solidify Murphy’s more-is-more style. It also became something of a star-making machine, elevating the likes of Darren Criss, Lea Michele, Melissa Benoist and (most memorably) Jane Lynch, who turned the slightly deranged cheerleading coach Sue Sylvester into an unforgettable comic character.

Matthew McConaughey kicked off his unexpected midcareer renaissance with this 2011 adaptation of the novel by Michael Connelly. It was something of a throwback, recalling the actor’s big break in the film version of another legal potboiler (John Grisham’s “A Time to Kill”), but this time as a more morally ambiguous protagonist, allowing McConaughey to display both the earnestness and cynicism that would reappear in his best work of the 2010s. A four-star supporting cast (including Marisa Tomei, John Leguizamo, Josh Lucas, Bryan Cranston and William H. Macy) helped make this a modest hit upon release, and such a Netflix favorite that the network turned it into an original series.

Clint Eastwood won his second Academy Award for best director (and his second for best picture) with this lean, mean boxing drama, adapted from a short story by the sportswriter F.X. Toole. Hilary Swank likewise won her second Oscar for her leading work as Maggie Fitzgerald, a tough tomboy from the wrong side of the tracks who persuades the old-timer Frankie Dunn (Eastwood) to manage her — with considerable resistance, since Frankie insists, “I don’t train girls.” The film is old-fashioned in its style, recalling the fight melodramas of Hollywood’s golden era. But it is contemporary in its storytelling, particularly when Frankie and Maggie’s bond is put to an unimaginable test.

The “Freaks and Geeks” co-stars Seth Rogen and James Franco reunited for this uproariously funny stoner action comedy, penned by Rogen and his “Superbad” co-writer, Evan Goldberg, and directed by David Gordon Green, then best known for modest indie dramas like “George Washington.” That odd combination of backgrounds and specialties could’ve made for a real mess, but Rogen and Goldberg’s script is wry and witty, Green’s direction is sure-handed, and Rogen and Franco are a pitch-perfect team, their opposites-attract chemistry recalling ’80s buddy movies like “48 HRS” and “Midnight Run.” Bonus laughs come from a pre-“Eastbound and Down” Danny McBride, who all but steals the film as a trigger-happy third wheel.

In December of 1978, Richard Pryor took the stage of the Terrace Theater in Long Beach, Calif., and delivered what may still be the greatest recorded stand-up comedy performance in history. It captures the comic at his zenith; his insights are razor-sharp, his physical gifts are peerless, and his powers of personification are remarkable as he gives thought and voice to household pets, woodland creatures, deflating tires and uncooperative parts of his own body. But as with the best of Pryor’s stage work, what’s most striking is his vulnerability. In sharing his own struggles with health, relationships, sex and masculinity, Pryor was forging a path to the kind of unapologetic candor that defines so much of contemporary comedy.

Before the miniboom of decidedly adult-oriented filmmakers trying their hands at family entertainment (Martin Scorsese’s “Hugo,” Wes Anderson’s “Fantastic Mr. Fox,” Todd Haynes’s “Wonderstruck”), the “Dazed and Confused” director, Richard Linklater, and the “Enlightened” creator, Mike White, joined forces to tell this story of a slacker musician who uses his prep-school substitute teaching gig to turn a class of fourth-graders into a rock band. White’s script is clever without being cute, and Linklater’s direction is engaged but unobtrusive. The biggest draw, though, is Jack Black in the starring role, one seemingly designed to show off his simultaneous gifts for broad comedy and hard rocking. It’s a warm, winning, endlessly funny performance.