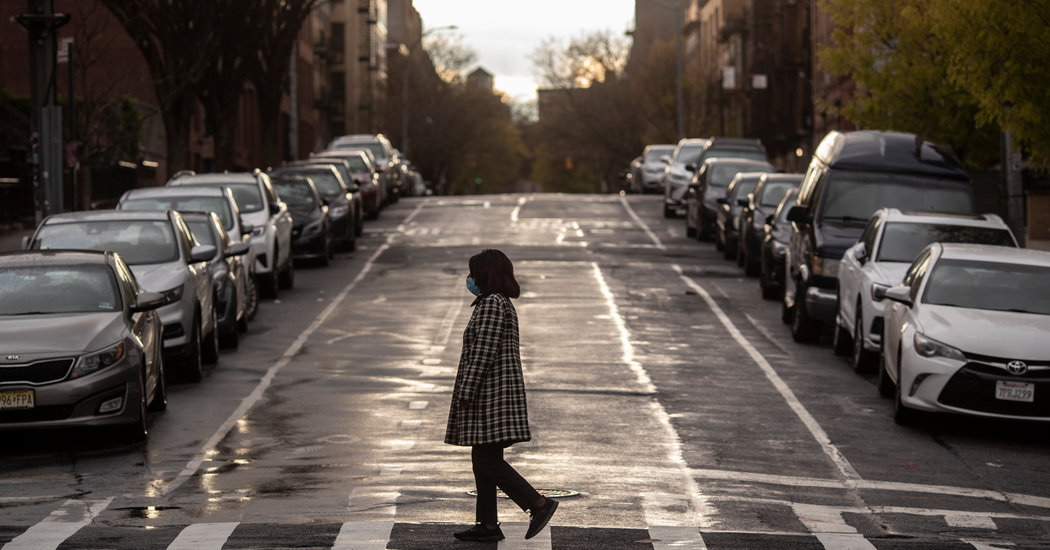 Late Tuesday afternoon, New York’s City Council speaker, Corey Johnson, was on a nine-mile walk, one the current crisis has him taking everyday — the quest for fresh air and decompression. Beginning from his boyfriend’s apartment in Williamsburg, he heads north into Queens over the Pulaski Bridge and through Hunter’s Point South Park. That is where he was when I caught up with him by phone, watching people for the most part diligently perform the choreography of social distance without, he noted, the interventions of the police.

For several weeks, Mr. Johnson had been pushing to close miles of city streets to cars as a means of accommodating what would only become a growing desperation to safely and more comfortably walk and bike outside as warmer weather approached. Mayor Bill de Blasio resisted for a long time, initiating a small pilot program and then abruptly shutting it down deciding that it wasn’t worth the trouble. He maintained that the Police Department, itself badly hit by the pandemic, was too depleted to enforce the plan, which implied that law enforcement was essential to carrying it out.

This week the mayor announced that he would indeed set aside up 100 miles of road in phases, the first 40 miles over the next month. Though many of the details have yet to be finalized, the police will monitor closings in some capacity. Advocates for livable streets have had a hard time understanding why the police would be so critical to the venture given that other cities like Oakland, Calif., have largely managed to ban traffic from select locations with barricades and signs.

Crises of the kind we are experiencing require nimble and innovative thinking, the willingness to break with frameworks of the past. The slow implementation of a measure that seems at once relatively simple and destined to provide so much good, offers one more example of the bureaucratic inertia that has distinguished management of the corona outbreak at so many different levels of government. If we can’t quickly summon cars off the street — and only some of them and just provisionally — at a time when no one is going anywhere, how can we expect the city to brilliantly and flexibly reimagine itself once the pandemic is over?

Throughout the 19th and early 20th centuries, public-health catastrophes managed to inaugurate the wholesale re-engineering of societies. Ingenuity was the hallmark of a time in which public health was intricately linked to urban planning and design. The continued eruptions of cholera and other diseases ultimately brought about transformative infrastructural changes to deliver clean air and water to places marked by filth, stench, pestilence.

The Paris that Georges-Eugène Haussmann famously conceived — a city of wide boulevards, parks, fountains — arose in response to a cholera outbreak that had moved the French government to demolish medieval buildings where illness was thought to spread too easily.

In this country, by the 1870s, the seven founding members of the American Public Health Association included an architect and a housing specialist. Frederick Law Olmsted was already a celebrated landscape architect when he became secretary of the United States Sanitary Commission, a precursor to the Red Cross, where he oversaw a medical network that aided wounded soldiers during the Civil War.

The ongoing health emergencies of the period were deeply personal for him. Olmsted’s first child had died of cholera. Both his brother and stepson were lost to tuber­culosis. The urban parks movement, led by Olmsted, was built on the notion that green space was the respiratory apparatus for any urban environment, the prerequisite for expectations of sound collective health.

Later, the advance of Modernist architecture was grounded in some of the same assumptions about the curative properties of light and air. The flat roofs, terraces, balconies, huge windows — the lean clinical aesthetic borrowed to a great extent from the design of sanitariums where tuberculosis patients were sent for treatment.

Twenty years earlier, Le Corbusier, the Swiss architect whose legacy is best observed in the unadorned apartment tower, looked to a future where cities were distinguished by a kind of stylized hygiene. “There are no more dirty, dark corners,” he wrote. “Everything is shown as it is. Then comes inner cleanliness.”

What New York will look like — how and under what circumstances we will come to feel “clean” — remains the great uncertainty. Disaster brings the opportunity for reinvention, but how enthusiastically will we embrace it? The two major cataclysms to afflict 21st century New York — 9/11 and then a decade later, Hurricane Sandy — similarly occasioned chances to abandon anachronistic approaches to the development of public and private space; were those chances squandered?

After the Twin Towers fell, government authorities and committees and subcommittees were formed and spent many years and billions of dollars to essentially refashion Lower Manhattan into a bigger and more elite mall. (Has anyone you have ever known set foot in the Montblanc store in the Oculus? Or even thought about it?) Hurricane Sandy was supposed to have awakened us, viscerally, to the threats of climate change, and instead it led the real-estate industry right back to constructing high-rises on the waterfront, adjusting by moving building mechanicals to the top of whatever went up.

The back and forth over whether or not to open streets fully to pedestrians and how to do it stems in part from concerns held by the police department that drivers won’t behave themselves and might ram either by accident or intent into people retreating onto open streets. This is the reasonable mind-set of counterterrorism, one that dominated the thinking of the department, to great success, for two decades. But it now requires a shift to new and different realities.

Much of the opposition to how New York might do things differently in the age of the coronavirus has followed the logic that we cannot adopt models deployed in other cities because we are not other cities — we are not Oakland; we are not Denver. We are bigger, denser, more complicated.

“I am so tired of this argument about New York exceptionalism,’’ Corey Johnson told me. “We are New York. The whole point is that we are creative.”