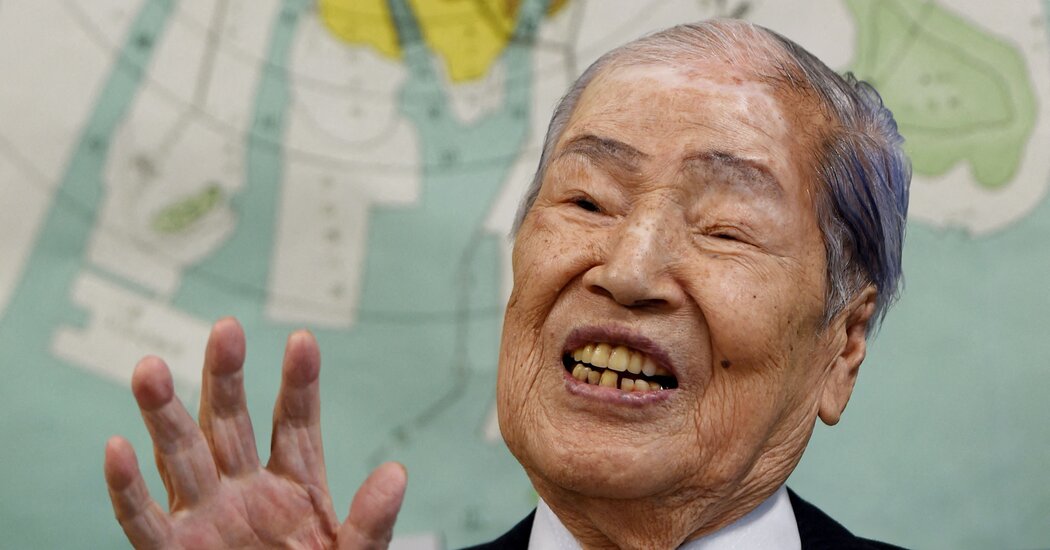 After suffering through the agony of the attack and its aftermath, he devoted himself to spreading the message that nuclear weapons should be abolished.

Sunao Tsuboi, who as a 20-year-old engineering student found himself less than a mile from the center of the atomic blast at Hiroshima and somehow survived, and who went on to devote himself to the cause of nuclear disarmament, including in a much-publicized meeting with President Barack Obama in 2016, died on Oct. 24 at a hospital in Hiroshima. He was 96.

The cause was abnormal cardiac rhythm from anemia, said Koichiro Maeda, the secretary general of the Hiroshima branch of Nihon Hidankyo, a Japanese group of atomic bomb survivors of which Mr. Tsuboi served as co-chairman.

Mr. Tsuboi would spend decades describing his experience on the cloudless morning of Aug. 6, 1945, when the Enola Gay, an American B-29 Superfortress, dropped a 9,700-pound uranium bomb on Hiroshima. It killed tens of thousands of people instantly and led to the deaths of many more in the following days, months and years.

Mr. Tsuboi was too close to the blast site to see the mushroom cloud. There was a silver-white flash and a bang, and he was hurled into the air. When he gained consciousness, he found his body burned from head to toe.

In an interview with The New York Times, he described the aftermath of the attack as “a living hell on earth.” All around him, he saw people trying to walk and collapsing, people with exposed organs or missing limbs.

After being taken to a military hospital and lapsing back into unconsciousness, he slowly recovered. For some time, he could crawl but not walk. Scars covered his body and his face.

Mr. Tsuboi was the first of several survivors of the attack whom President Obama met in the presence of Prime Minister Shinzo Abe of Japan during a trip to Hiroshima. It was the only visit to the city by a sitting U.S. president since World War II.

A handshake between President Obama and Mr. Tsuboi transformed into a more intimate and sustained moment of hand-holding and conversation. Mr. Tsuboi, then 91, told the president that he would be remembered for listening to survivors of the nuclear bomb.

In a speech that same day, President Obama called for a “moral revolution” in pursuing a world without nuclear weapons. Mr. Tsuboi had long devoted himself to making the same argument, leading The Guardian to label him in a 2015 profile “one of the world’s most active A-bomb survivors.”

Sunao Tsuboi (pronounced SOO-nah-oh tzu-bo-ee) was born on May 5, 1925, in Ondo, a rural town on Kurahashi Island, a short drive from Hiroshima, and grew up there. In 1943, he enrolled in the department of machinery at Hiroshima College of Technology (known today as the department of engineering at Hiroshima University).

Following the Hiroshima attack, he began working as a math teacher. He fell in love with a former student, Suzuko Enoki, but her parents objected to the match because they believed that Mr. Tsuboi could soon die from his lingering wounds and ailments. The couple took an excess of sleeping pills in a failed attempt to kill themselves. Her parents relented, and they married in 1957.

In an interview with “Memories of Hiroshima and Nagasaki — Messages From Hibakusha,” an online archive composed of firsthand accounts by people who survived the nuclear attacks (known as hibakusha in Japan), Mr. Tsuboi talked about making use of his wartime experience as a teacher.

“Today we have no class. Just listen to my story,” he would announce every year on Aug. 6. “Remember the horror of atomic bombs long after you become adults.”

After retiring in 1993, Mr. Tsuboi traveled the world. Again and again, he told his horrific story. During one trip to the United States, he visited the Steven F. Udvar-Hazy Center, an annex of the National Air and Space Museum in Chantilly, Va., to protest an exhibition about the Enola Gay that focused on the technology of the bomber rather than on the impact of the bomb it dropped. When Mr. Tsuboi stood before the plane itself, he looked at it silently.

Mr. Tsuboi’s wife died from a brain hemorrhage in 1992. He is survived by their son, two daughters and several grandchildren.

Despite the solemnity of the nuclear attack, Mr. Tsuboi took on a nickname in an effort to engage students: Mr. Pika-Don (Mr. Flash-Bang).

“The term ‘atomic bomb’ is difficult for children to grasp, but ‘Pika’ and ‘Don’ are easy to understand,” he said in the “Messages From Hibakusha” interview. “When I walked down the street, they would often call out to me, ‘Hello, Mr. Pika-Don!’”