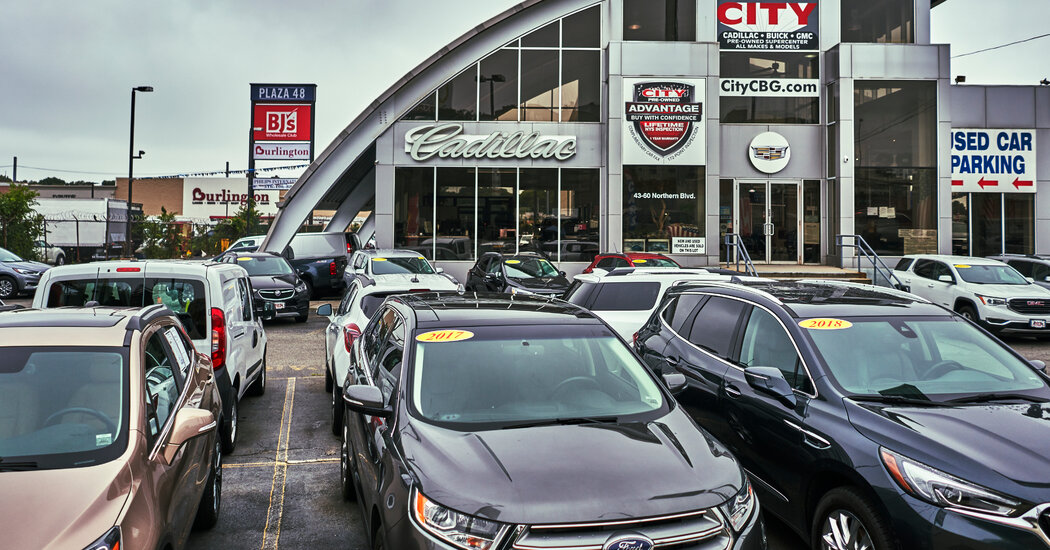 The limited supply of new and used vehicles is forcing some Americans to go to great lengths to find and buy them, including traveling to dealers hundreds of miles away.

When Rachael Kasper started shopping for a new car in August, she had her heart set on a Ford Escape plug-in hybrid. The problem was that Ford hasn’t made many of them this year because of a computer chip shortage that has slowed auto production around the world.

Ms. Kasper first came up empty in her home state of Michigan and, later, in neighboring states. When she expanded to the East Coast, she found one — at a dealership 537 miles away, in Hanover, Pa.

“I flew to Baltimore, took a Lyft to the dealer, and then drove all the way home,” said Ms. Kasper, who owns a water-sports equipment retailer. “It was quite an adventure.”

The shortage of computer chips, in large part caused by decisions made in the early days of the pandemic, has rippled through the auto industry this year. Manufacturers have had to close plants for lack of parts, leaving car dealers with millions fewer vehicles to sell.

As a result, car buyers have had to travel hundreds of miles to find the vehicles they want, give up on haggling and accept higher prices, and even snap up used cars that have been repaired after serious accidents.

The supply squeeze coincides with an apparent increase in demand. Some people are trying to avoid mass transit or taxis. Others simply want a vehicle. Many families have saved thousands of dollars thanks in part to government benefits and stimulus payments and because they have been spending less on travel, restaurant meals and other luxuries that have fallen by the wayside because of health concerns.

The end of the year is normally a peak selling season, with some automakers running ads in which cars are presented as gifts complete with giant bows. But this year consumers are finding that locating the car of their desires is not quick, easy or cheap.

As Ed Matovcik, a wine industry executive in Napa, Calif., neared the end of his lease on a Tesla Model S, he decided to switch to a Porsche Taycan, a German electric car. He ordered one, but it won’t arrive until May, three months after he has to give up the Tesla.

He is planning on renting cars until the Taycan arrives and is looking on the bright side. “It’s a different world now, so I don’t really mind the wait,” he said. “I’m thinking of renting a pickup for a week so I can finally clear out my garage.”

The disruption to car production has rippled through the automotive world. For a time in the spring and summer of 2020, rental car companies stopped buying new cars and sold many of their vehicles to survive while travel was restricted. Now those companies are seeking to take advantage of a hot rental market and are scrambling to buy cars, often competing with consumers and dealers.

The big discounts and incentives that were once standard features of car-buying in the United States have all but disappeared. Instead, some dealers now add an extra $2,000 or $3,000 on top of the list price for new cars. That has left car buyers fuming, but the dealers who are jacking up prices know that if one customer balks, another is usually waiting and willing.

Because of the rising prices of used cars, some consumers are spending to fix up older vehicles and keep them going for longer. More cars that have been damaged in accidents are getting fixed instead of being declared a total loss by insurers and sent to the scrap yard.

“The math has changed on whether a car is totaled,” said Peter DeLongchamps, a senior vice president at Group 1 Automotive, a Houston-based auto retailer that operates its own chain of auto-body shops. “Our parts and service business is very good. We’re seeing more cars getting fixed based on the high used values.”

The auto industry’s chip shortage stems from the start of the pandemic, in the spring of 2020, when automakers closed factories for weeks and cut orders for computer chips and other parts. At the same time, homebound consumers were snapping up laptops, game consoles and other electronics, spurring makers of those devices to increase orders for semiconductors. When automakers resumed production, they found chip suppliers had less production capacity for them.

As a result, automakers have produced significantly fewer trucks and cars this year than they had planned. In addition to closing plants, they’ve built vehicles without certain features, such as heated seats and electronics that maximize fuel economy. Tesla dropped power lower-back support in the passenger seat of certain models.

The Omicron variant. The highly transmissible Covid strain appears to be less severe than previous variants, according to new studies. Research also suggests many non-mRNA vaccines offer almost no defense against infection, though the Pfizer and Moderna boosters, which are mRNA-based, likely provide strong protection.

The holiday season. With planned end of the year gatherings, the new Covid surge is prompting worries and cancellations. The Times asked experts to share some holiday guidance, as well as some tips on using at-home Covid tests (if you can find any). Here is what to do if you test positive for Covid.

The lower production has limited sales of new vehicles this year. Edmunds expects the industry to sell about 15 million light trucks and cars, well short of the 17 million that was considered a benchmark in the years before the pandemic. It expects a modest rise in 2022, to 15.2 million vehicles.

Carmakers have said the supply of chips has improved in recent months, but executives expect the components will remain a problem for much of next year.

Some automakers are testing new strategies to ensure a steady supply of chips in the future. Ford Motor recently said that it was collaborating with GlobalFoundries, which operates semiconductor plants, to develop chips specifically for Ford vehicles, and that it was seeking ways to increase chip production in the United States.

General Motors is working with chip makers to develop three basic chips that can handle most of its needs. The company expects that strategy to increase supply while cutting costs significantly.

“We do see the chip issue continuing to run through ’22,” Ford’s chief financial officer, John Lawler, told analysts on a conference call in October. “We’re doing everything we can to get our hands on as many chips as we can.”

That means consumers are going to be paying full price for new cars and shopping far and wide.

For some would-be car buyers, though, the market is just too rich.

Tom Maletic, a retired medical sales executive in New Orleans, recently started shopping for a two- or three-year-old Ford EcoSport, a small sport-utility vehicle. He had hoped to find one with fewer than 20,000 miles priced around $15,000, which is what he paid for an EcoSport for his wife earlier in the year. “But it was 17, 18, 19, 21,000” dollars, he said. “And these were five years old, six years old, with a lot of miles on them.”

In the end, he flew to Michigan to take back a 2015 Ford Escape he had passed on to his son, and drove it the 1,100 miles back to New Orleans.