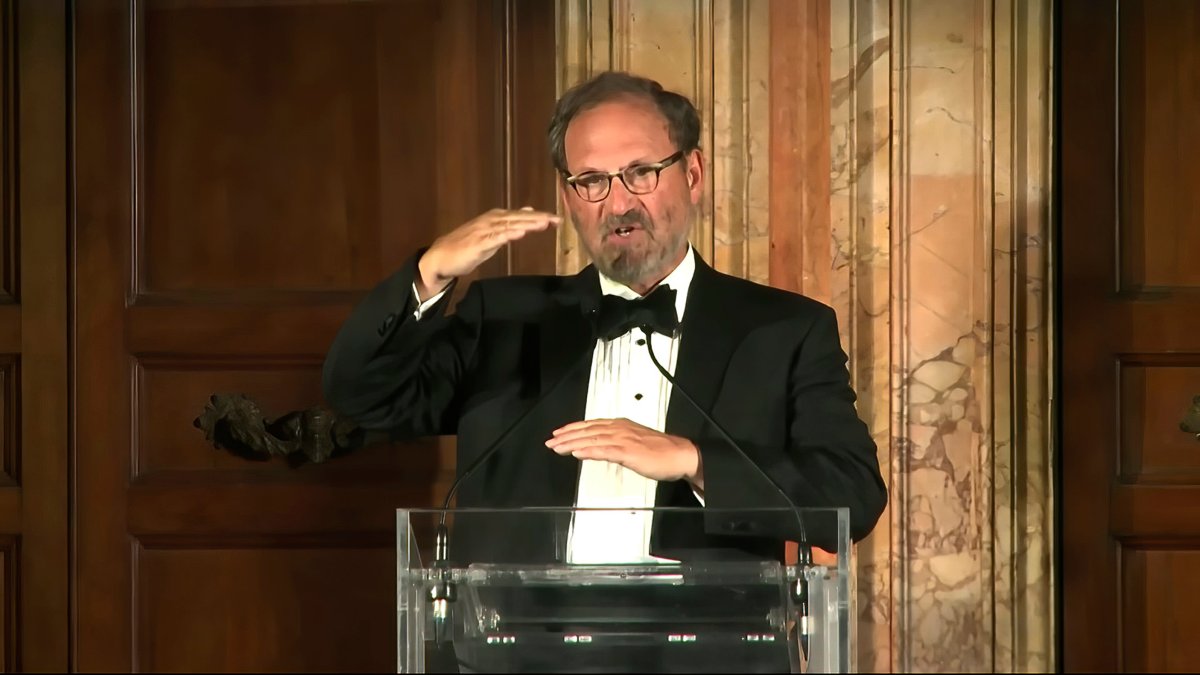 Justice Samuel Alito mocked foreign leaders’ criticism of the Supreme Court decision he authored overturning a constitutional right to abortion, in his first public comments since last month’s ruling. The justice’s remarks drew more criticism as well as some support.

Speaking in Rome at a religious liberty summit, Samuel Alito, 72, spent only a couple of minutes on the subject of abortion, and then only to discuss his foreign critics — an unusual step for a high court justice.

Dressed in a tuxedo and sporting a beard he sometimes grows when the court is out of session, Alito quipped that the ruling he authored had been “lambasted by a whole string of foreign leaders,” then joked that British Prime Minister Boris Johnson had “paid the price” for his comments. Johnson called the decision “a big step backwards” shortly before stepping down amid unrelated ethics investigations.

The decision by the court’s conservative majority led roughly a dozen states to shut down or severely restrict abortions within days. Eventually half of U.S. states are expected to ban or seriously restrict the procedure.

Alito also drew laughs from the audience at the conference, sponsored by the University of Notre Dame law school, when he said that “what really wounded me” were remarks made” by Britain’s Prince Harry. Speaking to the United Nations last week, Harry talked about the “rolling back of constitutional rights here in the United States” as one of a series of converging crises that also included the Russian invasion of Ukraine.

French President Emmanuel Macron and Canadian Prime Minister Justin Trudeau also drew Alito’s attention in the talk he gave in Rome on July 21 at the invitation-only event. The law school posted the video this week. Alito was not identified in advance as a speaker at the conference.

Johnson’s office did not immediately respond to a request for comment. Trudeau’s press secretary Cecely Roy said he would “always will stand up for women’s constitutional rights — including the right to choose and access to abortion.”

While justices routinely engage in pointed exchanges with their colleagues in dueling opinions, they rarely respond to outside critics. That’s especially true when talking about foreign leaders in an appearance outside the U.S., said Neil Siegel, professor of law and political science at Duke Law School.

“His tone can be quite dismissive and scathing. It’s as if he simply doesn’t care that there are tens of millions of people in this country and abroad who disagree with him profoundly,” he said. “I think the most important thing is that this is not how our justices are supposed to behave.”

Yet there is no prohibition on justices discussing cases publicly once they are decided, said Akhil Reed Amar, professor of constitutional law at Yale Law School. Alito’s comments weren’t about the underlying issue of abortion, but rather about foreign dignitaries weighing in on American law without necessarily being well versed in the subject, he said. Johnson, for example, may have been seeking to draw attention away from his own domestic issues, Amar said.

“This was slightly impertinent on their part,” Amar said, who also praised Alito for responding “with a little bit of wit and style.”

“I’m an activist, and whenever I’m given a platform to share my activism work or support people in my community, I’m going to do just that. So honestly, Matt Gaetz has gifted me a national platform on a silver platter,” says Olivia Julianna of Gen Z For Change. The 19-year-old activist joined LX News host Tabitha Lipkin to discuss her viral fundraiser launched after the Florida Congressman insulted her online.

The justice’s speech drew criticism Friday from U.S. Rep. Alexandria Ocasio-Cortez, D-N.Y., who wrote in a tweet the remarks were politicized and said they “should be alarming to anyone.”

It’s “ironic” that Alito scoffed at international opinions even though he cited English jurists from the 17th and 18th centuries in the opinion overturning Roe v. Wade, said Michele Goodwin, a professor at the University of California, Irvine, and the founding director of the Center for Biotechnology and Global Health Policy. “He himself invested in an ideology from abroad that was quite arcane in order to do what he did in this decision,” he said.

The speech comes amid a sharp increase in the portion of Americans who say their confidence in the Supreme Court is eroding. A poll from The Associated Press -NORC Center for Public Affairs Research this week found 43% of Americans have “hardly any confidence” in the court, up from just 27% percent three months ago.

The abortion ruling was one of several seismic decisions this summer, but overturning Roe v. Wade and ending a nearly half-century guarantee of abortion rights had the most widespread impact.

Alito’s speech was dedicated primarily to praising religious liberty, another area in which conservatives prevailed at the Supreme Court in cases involving tax dollars for religious schools in Maine and a football coach’s right to pray at the 50-yard line.

Indiana OBGYN Dr. Caitlin Bernard has received calls of support, and others that were threatening, after she provided abortion care to a 10-year-old Ohio girl who survived a sexual assault. In an interview with NPR, Bernard said she will continue providing care to the fullest extent the law will allow. NPR reporter Sarah McCammon joins LX News to discuss her recent interview with Bernard.

He has been a justice since 2006, appointed by President George W. Bush.

Four years later, attending President Barack Obama’s State of the Union speech, Alito was caught on camera mouthing the words “not true” in response to Obama’s criticism — also unusual — of another major, conservative-driven court decision, the Citizens United case that opened the floodgates to corporate and union spending in federal election campaigns.

Alito has never addressed that controversy in public, but it seems clear from the questions he posed when the court heard arguments that he objected to Obama saying the ruling reversed a century of law.

Alito has never again attended the State of the Union address.