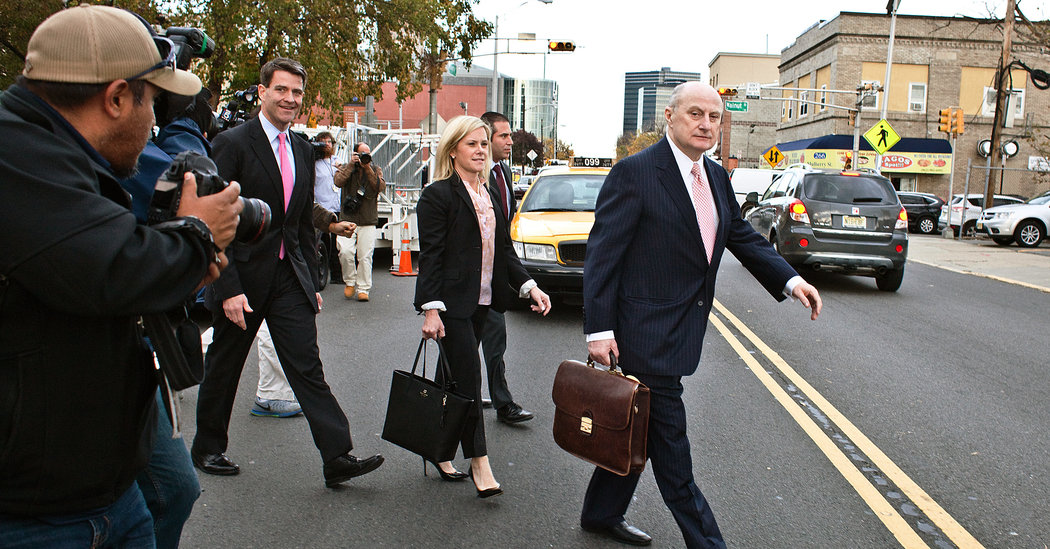 WASHINGTON — The Supreme Court on Thursday unanimously overturned the convictions of two defendants in the “Bridgegate” scandal that snarled traffic on the world’s busiest bridge, upended New Jersey politics and doomed the presidential aspirations of Chris Christie, the state’s governor at the time.

The case resulted from a decision in 2013 by associates of Mr. Christie to close access lanes to the George Washington Bridge in a wild scheme that was meant to punish one of the governor’s political opponents and ended up creating four days of enormous traffic jams that posed risks to public safety.

That was an abuse of power, the Supreme Court ruled, but not a federal crime.

The associates, Bridget Anne Kelly and Bill Baroni, were convicted of wire fraud and other federal charges for their roles in concocting what they said was a “traffic study” that caused extreme delays for motorists seeking to cross the bridge from Fort Lee, N.J., to Manhattan.

The mayor of Fort Lee, Mark Sokolich, a Democrat, had rebuffed a request to endorse Mr. Christie’s re-election bid in 2013, and this was his punishment. Mr. Christie has denied any knowledge of the scheme.

“Time for some traffic problems in Fort Lee,” Ms. Kelly, an aide to Mr. Christie, wrote in an email to officials at the Port Authority of New York and New Jersey, which operates the bridge.

She went on to write that “the evidence the jury heard no doubt shows wrongdoing — deception, corruption, abuse of power.”

“But the federal fraud statutes at issue do not criminalize all such conduct,” she wrote. “Under settled precedent, the officials could violate those laws only if an object of their dishonesty was to obtain the Port Authority’s money or property.”

And, she wrote, “the realignment of the toll lanes was an exercise of regulatory power — something this court has already held fails to meet the statutes’ property requirement.”

It is not the first time that the justices have shown their skepticism of public corruption cases. In 2016, it unanimously overturned the conviction of Bob McDonnell, a former governor of Virginia who was accused of accepting luxury products, loans and vacations from a business executive in return for arranging meetings and urging underlings to consider the executive’s requests.

In New Jersey, the controversy touched off by the traffic diversion helped sink the presidential campaign of Mr. Christie in 2016, allowing Donald Trump to become the face of the anti-Washington sentiment that the governor had hoped to tap into.

In a statement on Thursday, Mr. Christie said he had been vindicated.

“As many contended from the beginning, and as the court confirmed today, no federal crimes were ever committed in this matter by anyone in my administration,” he said. “It is good for all involved that today justice has finally been done.”

He went on blame the Justice Department under President Barack Obama and the U.S. attorney who prosecuted the case, Paul J. Fishman.

“This case was driven by a U.S. attorney and Justice Department in search of a predetermined and biased outcome,” Mr. Christie said. “In recklessly pursuing that outcome, they violated the oath sworn by every member of the Department of Justice.”

A lawyer for the U.S. attorney’s office in New Jersey said the court’s decision “speaks for itself” and offered no further comment.

Mr. Fishman, now in private practice, took issue with Mr. Christie’s comments. “It is stunning, but perhaps not surprising, that Chris Christie’s response is to concoct accusations of political ambition, partisanship and personal vindictiveness,” he said in a statement. “Chris Christie may try to rewrite his legacy — and he may want to rewrite history — but the fact remains that the ‘deception, corruption and abuse of power’ was committed for precisely those reasons by his team on his watch.”

But the self-proclaimed mastermind of the plan, David Wildstein, a former Port Authority official who eventually pleaded guilty and cooperated with the prosecution, said he was still remorseful for the lane-closing scheme.

“The conduct by me and others was still wrong,” Mr. Wildstein said in a statement. “This is not a vindication. My apologies stand, my remorse continues and I fully accept responsibility for my role.”

For Mr. Christie, the scandal halted a rapid political ascent, battered his legacy and sent his approval rating — once a record high in New Jersey — plummeting to the low 20s. And though he was never personally implicated, the guilty convictions of his two former top aides was enough for many voters in New Jersey and around the country to turn on the once-popular governor.

In interviews during the twilight of his second term, Mr. Christie pointed to the scandal as one of the reasons the trust he had with New Jersey voters had been shaken.

“The theory behind Bridgegate was it was an act of bullying, right?” Mr. Christie said in an interview with The Times in 2017. “And people saw me as a tough guy, but as long as you don’t go over that line that’s drawn somewhere between being tough and principled and being a bully, they’re OK with it. But Bridgegate seemed to indicate to them that that line had been crossed.”

In a statement, Ms. Kelly, who had been Mr. Christie’s deputy chief of staff, praised the decision issued Thursday. “Today, the court gave me back my name and began to reverse the six-and-a-half-year nightmare that has become my life,” she said.

Ms. Kelly was sentenced to 13 months in prison but remained free while the Supreme Court considered her case.

In his own statement, Mr. Baroni said, “I have always said I was an innocent and today, the Supreme Court unanimously agreed.”

Mr. Baroni, who served as deputy executive director at the Port Authority of New York and New Jersey, was sentenced to 18 months in prison in February 2019 and reported to a federal corrections facility in Pennsylvania two months later. He was released on bail after the Supreme Court agreed to hear the case in June.

The traffic scheme was undertaken gleefully, Justice Kagan wrote, and was calculated to create chaos. The idea was Mr. Wildstein’s, she wrote, but it was embraced by Ms. Kelly and approved by Mr. Baroni. Mr. Baroni contended that he had not been told that the traffic plan was political payback rather than a legitimate traffic study, but the jury did not accept his testimony and found him guilty of wire fraud and conspiracy.

The traffic problems started on the first day of the school year, and almost immediately brought Fort Lee’s streets to a standstill. “An ambulance struggled to reach the victim of a heart attack,” Justice Kagan wrote. “Police had trouble responding to a report of a missing child.”

The defendants, Justice Kagan wrote, “merrily kept the lane realignment in place for another three days.”

Justice Kagan wrote that the defendants had given false reasons for their actions, but that lying by government officials was not by itself a federal crime. The lies must also result in “obtaining money or property.”

She rejected the prosecution’s two theories of why the scheme had indeed obtained property. The defendants had not commandeered the traffic lanes in a meaningful sense, she wrote, as realigning them was a mere regulatory decision. And the additional personnel costs the scheme entailed, Justice Kagan added, were “an incidental byproduct of the scheme.”

Chief Justice John G. Roberts Jr., writing for the court in the McDonnell case in 2016, said that only formal and concrete government actions could form the basis of a corruption prosecution. Anti-corruption laws, the court has indicated, were meant to cover only classic bribery and kickbacks.

Justice Kagan struck a similar note on Thursday. “Much of governance involves (as it did here) regulatory choice.” she wrote.

“If U. S. attorneys could prosecute as property fraud every lie a state or local official tells in making such a decision, the result would be,” she wrote, quoting an earlier decision, “a sweeping expansion of federal criminal jurisdiction.”

“In effect, the federal government could use the criminal law to enforce (its view of) integrity in broad swaths of state and local policymaking,” Justice Kagan wrote. “The property fraud statutes do not countenance that outcome.”