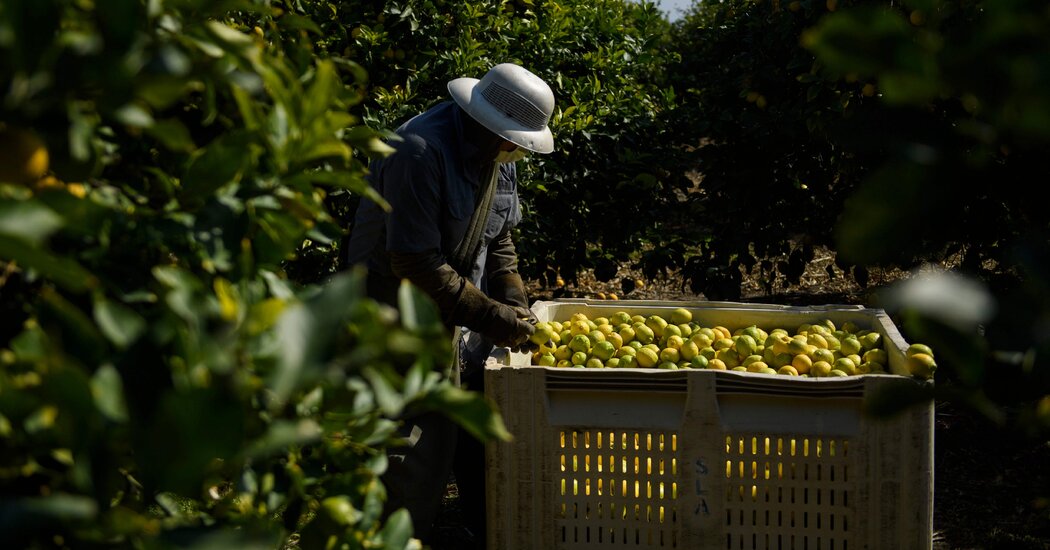 The justices considered a California regulation that allowed labor representatives to meet with farm workers at their worksites for up to three hours a day for as many as 120 days a year.

WASHINGTON — The Supreme Court on Monday searched for a middle ground in a case pitting union organizing campaigns against private property rights.

A majority of the justices seemed uneasy with a California regulation that allows union representatives to meet with farmworkers at their worksites for up to three hours a day for as many as 120 days a year. The regulation’s drafters said this was the only practical way to give the workers, who are often poorly educated and hard to locate, a realistic chance to consider joining a union.

But several justices said they were concerned about ruling that the regulation amounted to a government taking of property, fearing such a decision could endanger all kinds of laws authorizing entry onto private property, including government safety inspections and visits from social services workers.

Justice Stephen G. Breyer said a broad ruling could affect “dozens and dozens and dozens” of other laws, including one allowing inspections of coal mines four times a year. At nuclear power plants, Justice Sonia Sotomayor said, “there are inspections almost on a daily basis, if not a weekly or monthly basis.”

Joshua P. Thompson, a lawyer with the Pacific Legal Foundation, which represents the two businesses challenging the state regulation, said that “reasonable government inspections” did not amount to the taking of private property. But the activities of labor unions and other private entities, he said, were a different matter.

Chief Justice John G. Roberts Jr. said the government might be able to delegate its power. “Why doesn’t,” he asked, “promoting peaceful labor relations fall under the same category as safety inspections? In other words, it benefits the public interest to have limited access along those lines.”

The case, Cedar Point Nursery v. Hassid, No. 20-107, arose from organizing efforts in 2015 at Fowler Packing Company, a shipper of table grapes and citrus, and Cedar Point Nursery, which grows strawberry plants. They sued California officials in 2016, saying the law allowing unions to have access to their properties amounted to a government taking of private property without compensation, and lost in the lower courts.

Justice Brett M. Kavanaugh proposed a solution that he said avoided the extreme positions taken by the businesses challenging the regulation on the one hand and the state officials defending it on the other. He said the court could draw on a 1956 decision concerning a federal labor law, one that excluded agricultural workers.

“If the location of a plant and the living quarters of the employees place the employees beyond the reach of reasonable union efforts to communicate with them,” Justice Stanley Reed wrote for the court, “the employer must allow the union to approach his employees on his property.”

Under that approach, Justice Kavanaugh said, the court could rule that the California access regulation was too broad without making a general statement about government takings of private property.

“We’ve already considered 65 years ago the balance of property rights against labor organizing,” he said. “We set forth a very clear rule.”

Mr. Thompson appeared reluctant to win on those grounds, saying the case presented a larger question about property rights.

Michael J. Mongan, California’s solicitor general, urged the court to rule only that the access regulation did not amount to the sort of “per se” taking of property that requires compensation no matter how minor.

The businesses challenging the regulation, issued by the California Agricultural Labor Relations Board, he said, “can’t credibly claim that the board’s regulation destroys all their rights to any part of their property or that it’s the functional equivalent of the government taking over their farm.”

Justice Kavanaugh also asked Mr. Mongan about the 1956 decision. Mr. Mongan responded that the regulation addressed the same concerns as the ones at issue in the decision — to try to ensure that union organizers have access to workers whom they would have difficulty contacting anywhere but at their workplaces.

“I think the board expressly recognized that same need in its regulation,” Mr. Mongan said, “and it took a somewhat different approach.”

The answer did not satisfy Justice Kavanaugh. “But isn’t that a problem right there?” he asked. “It took a different approach that intruded on the property rights more than the Supreme Court, this court, had allowed in Babcock?”