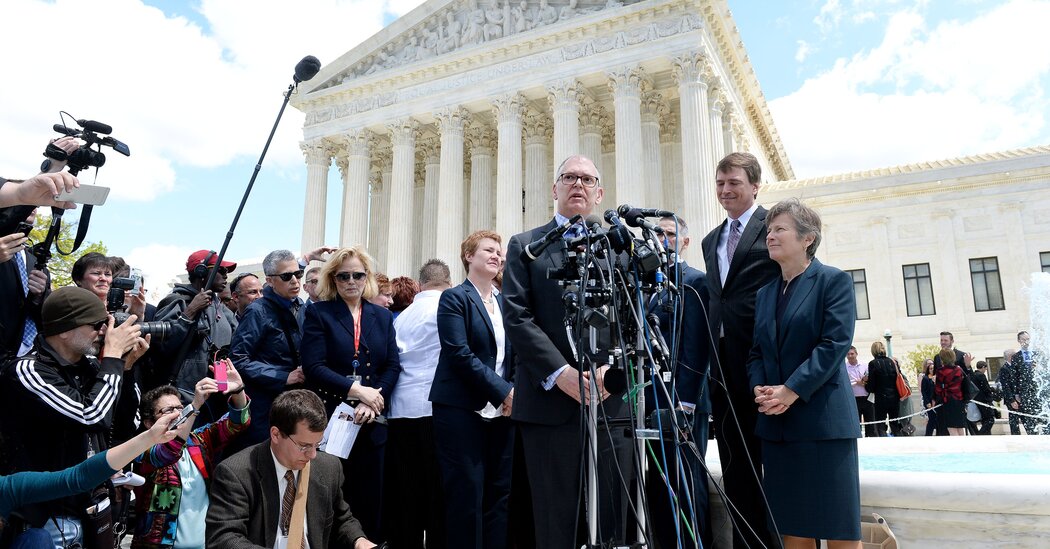 WASHINGTON — In an argument marked by sharp exchanges on the sweep of its 2015 decision establishing a right to same-sex marriage, the Supreme Court on Wednesday considered whether Philadelphia may bar a Catholic agency that refuses to work with same-sex couples from screening potential foster parents.

The argument, heard by telephone, came about a month after Justice Clarence Thomas, joined by Justice Samuel A. Alito Jr., appeared to urge the court to reconsider the 2015 decision, Obergefell v. Hodges, saying it stigmatized people of faith who objected to same-sex marriage.

Chief Justice John G. Roberts Jr., who dissented from the 2015 decision, asked a lawyer for the agency, Catholic Social Services, whether her client’s position, rooted in religious freedom, was “in tension with another set of rights, those recognized in our decision in Obergefell.”

The lawyer, Lori H. Windham, responded that the agency merely wanted to continue work that it had been doing for centuries. Prompted by leading questions from several conservative justices, she said no gay couple had ever applied to the agency. If one had, she said, the couple would have been referred to another agency.

The Supreme Court has been quite receptive to claims pressed by religious groups, and that trend is likely to continue now that Justice Amy Coney Barrett has replaced Justice Ruth Bader Ginsburg, who died in September and was generally skeptical of such arguments. Justice Barrett’s questions in the case, the first major one in which she has participated, were evenhanded and did not reveal her position.

“What if there was an agency who believed that interracial marriage was an offense against God and, therefore, objected to certifying interracial couples as foster families?” Justice Barrett asked.

Ms. Windham responded that the “government has a compelling interest in eradicating racial discrimination,” suggesting that eliminating discrimination based on sexual orientation was less important.

Hashim M. Mooppan, a lawyer for the Trump administration arguing in favor of the agency, also said that “there’s a particularly compelling interest in eradicating racial discrimination.”

Justice Alito said a passage in Justice Anthony M. Kennedy’s majority opinion in Obergefell, which was decided by a 5-to-4 vote, had stressed the need for accommodations among those who hold conflicting views on same-sex marriage.

Justice Kennedy, who retired in 2018, did indeed call for “an open and searching debate” on same-sex marriage, writing that “the First Amendment ensures that religious organizations and persons are given proper protection as they seek to teach the principles that are so fulfilling and so central to their lives and faiths, and to their own deep aspirations to continue the family structure they have long revered.”

Justice Elena Kagan pressed Mr. Mooppan to say whether the eradication of discrimination based on sexual orientation was a compelling state interest. He said that “we haven’t taken a position on that question.”

Justice Alito said that Philadelphia had exhibited hostility to the Catholic agency’s views.

“If we are honest about what’s really going on here,” he told Neal K. Katyal, a lawyer for the city, “it’s not about ensuring that same-sex couples in Philadelphia have the opportunity to be foster parents. It’s the fact that the city can’t stand the message that Catholic Social Services and the archdiocese are sending by continuing to adhere to the old-fashioned view about marriage.”

Similarly, Justice Brett M. Kavanaugh said Philadelphia was “looking for a fight and has brought that serious, controversial fight all the way to the Supreme Court even though no same-sex couple had gone to C.S.S., even though 30 agencies are available for same-sex couples and even though C.S.S. would refer any same-sex couple to one of those other agencies.”

“What I fear here is that the absolutist and extreme position that you’re articulating,” he told Mr. Katyal, “would require us to go back on the promise of respect for religious believers.”

Mr. Katyal said the case, Fulton v. City of Philadelphia, No. 19-123, was an easy one. When the government hires independent contractors like the Catholic agency, he said, it acts on its own behalf and can include provisions barring discrimination in its contracts.

Mr. Katyal added that there was no evidence that the city was hostile to religion, noting that it continued to use the agency in other parts of its foster care system, paying it $26 million a year.

Jeffrey L. Fisher, a lawyer for two nonprofit groups that sided with Philadelphia, said a ruling for the Catholic agency could allow other government contractors and employees to refuse to follow the government’s instructions based on their religious beliefs.

The city barred Catholic Social Services from screening potential foster parents after a 2018 article in The Philadelphia Inquirer described its policy against placing children with same-sex couples. The agency and several foster parents sued the city, seeking to be reinstated. They said the city’s action violated their First Amendment rights to religious freedom and free speech.

A unanimous three-judge panel of the U.S. Court of Appeals for the Third Circuit, in Philadelphia, ruled against the agency. The city was entitled to require compliance with its nondiscrimination policies, the court said.

The agency asked the court to use the case to reconsider an important precedent limiting First Amendment protections for religious practices. The precedent, Employment Division v. Smith in 1990, ruled that neutral laws of general applicability could not be challenged on the ground that they violated the First Amendment’s protection of the free exercise of religion.

That request did not receive a great deal of attention during the argument, which lasted about 45 minutes longer than the scheduled hour.