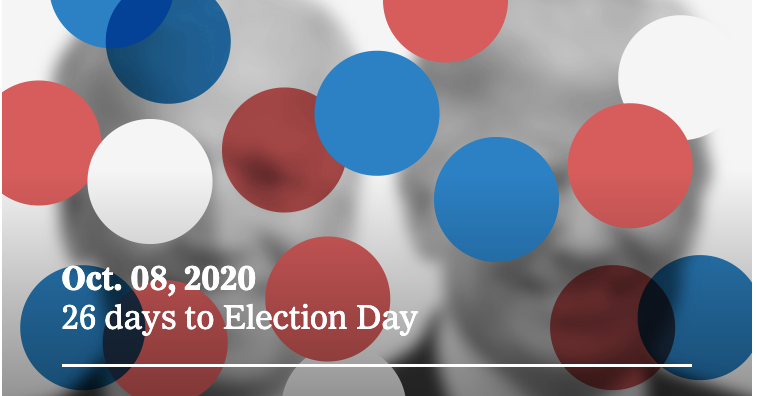 Behind a day of dismal polling for the president.

On Tuesday, I noted that when you consider how few days remain in the race, it was probably President Trump’s worst day of polling so far this campaign. Today, there were a few points of relatively good news for him from high-quality pollsters. But here’s the thing: Even the “good news” for Mr. Trump is still quite bad.

Well, that’s a lot. When you get so many polls on a day like this, it’s somewhat helpful to consider three things: How bad were the worst polls for the president, how good were the good polls, and where does the average stand?

The president’s bad polls were really, really bad. For the second straight day, nearly every national survey showed the president down by 10 points or more. Even Rasmussen, often the most favorable pollster to the president, showed Joe Biden ahead by 12 points nationwide.

The president’s worst state polls showed Mr. Biden tied or ahead in states worth well over 400 electoral votes. Quinnipiac surveys showed Mr. Biden ahead by a (not terribly believable) 11 points in Florida, by 13 points in Pennsylvania and by five points in Iowa. There were polls by Democratic-leaning firms showing Mr. Biden way ahead in North Carolina, ahead in Texas, and highly competitive in Missouri (down by only two points in a state Mr. Trump carried by 19 points in 2016).

In comparison, the surveys showing Mr. Biden leading narrowly in Iowa and Ohio and tied in Texas looked entirely reasonable.

A few weeks ago, we used to note that the race was teetering between being highly competitive and a landslide. On a given day, the president’s best polls would show a tight race in Pennsylvania and Florida, but also with Mr. Biden within striking distance in Georgia and Ohio. If the polls were off by a couple of points, either way, you could have a pretty close contest or a blowout.

By that same logic, the race today is teetering between a straightforward loss for the president and the worst defeat of an incumbent president since Herbert Hoover.

More about Marquette. It’s worth taking a second to contemplate this Wisconsin number from the Marquette Law poll. It’s the first result from a telephone survey in Wisconsin in several weeks, it’s from one of the best pollsters in the country, and the result is somewhat closer than we would have guessed.

In most of our discussions about the various roads to 270 electoral votes, we have mostly supposed that Wisconsin is part of Mr. Biden’s path of least resistance after several high-quality pollsters showed him solidly ahead in early September, just after the Republican convention. Since then, the national polls have shifted two to three points in Mr. Biden’s favor, so we would have guessed he was even further ahead today — maybe even up by eight to nine points.

Now, it’s been a while since we’ve had many telephone surveys of Wisconsin, so we don’t have a particularly robust average in the state. Most of our assumptions about the race are based on polls that are fairly out of date, mainly conducted during or in the immediate aftermath of the unrest in Kenosha. So it’s possible that the president’s standing is relatively resilient in Wisconsin.

If the president is indeed holding up well in Wisconsin, that would help keep one of his best remaining hopes alive: the chance that he can scratch out a victory in the Electoral College while losing the national popular vote by a much wider margin than he did four years ago. There are limits to what the president can realistically hope to pull off here — winning while losing the national vote by more than five points would be a real stretch. But if Mr. Trump really were down only by five points in Wisconsin, even as he trails by 10 nationwide, it would be one important step toward keeping that possibility alive.

We’ll have a Times/Siena poll in Wisconsin early next week, so that ought to help clarify things.

A daunting deficit. You could go nuts trying to decide whether to believe the really, really bad polls for Mr. Trump or the merely bad polls for him, and that’s where the poll average comes in. By our estimates, he faces an increasingly daunting deficit with under a month until the election. He trails by nearly 10 points nationwide.

Can things still change, starting with the vice presidential debate? Yes. There’s still a month left, and just think about all that’s happened in half that time: Ruth Bader Ginsburg’s death, The Times’s Trump tax story, Amy Coney Barrett’s nomination, a presidential debate, and now the president’s coronavirus diagnosis, hospitalization and eventual release. For all the talk that “nothing matters,” the news has definitely had a material effect on the polls.

It’s quite possible that the news could still turn back in the president’s favor. He’s out of the hospital. The confirmation hearing of Judge Barrett could go well for him. A strong debate performance by Mike Pence and a poor one by Kamala Harris could help change the conversation.

Yes, it’s pretty unlikely that a perceived debate victory by Mr. Pence would sway many voters to the president. But it could help the president in the polls. The news, after all, has been quite bad — and bad news can affect poll results, even without really causing deep-seated changes in public opinion. As we discussed yesterday, it can make the supporters of one candidate less likely to take a survey. It can also make them less likely to voice their support for a candidate they’re almost certain to vote for in the end — not because they’re “shy,” but because they really do feel troubled about their candidate in ways that leave them unwilling or unable to commit to support him at a challenging moment.

It might lead some undecided voters to throw up their hands and back a candidate whom they won’t feel inclined to back just a few days later.

If that’s true — and remember that we’re still talking at the margins — it’s possible that some modicum of good news for Mr. Trump could help bring about a more neutral news environment and help him a bit in the polls. That could be as simple as a solid or even neutral debate performance tonight by Vice President Pence.